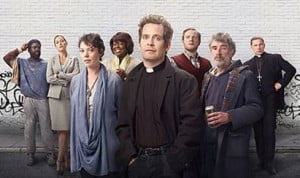 Having missed (though recorded) the first episode of the new series of Rev, I managed to catch the second episode last night…along with (it seems) half of the Church of England clergy. Not surprisingly, the main plot line followed Adam Smallbone’s convoluted attempts ‘not’ to marry a gay couple in his church, but simply say prayers after a celebrating of the Eucharist. There were the usual simplistic swipes at the ‘traditional’ position (‘God will bless your relationship; it is the Church that won’t’), and the subliminal propaganda that the lively gay community could rescue the church from insignificance and dullness—if only the Church would let them. But I have to say it was still very therapeutic to have a good laugh around an issue about which so many have got so angry. Adam’s constant insistence that this was not a wedding, despite the expectations and the symbolism, and the inquisitorial dialogue with the Archdeacon afterwards, were perfect. The final scene [spoiler alert] of Adam actually performing the ceremony was a masterstroke, since it was entirely unclear whether it happened in reality or in Adam’s pastoral imagination.

More generally, the programme is acutely well-observed—I suspect because of detailed advice from people like Revd Richard Coles. This episode touched on just about all of the recently current debates. The ‘Save your Church’ course, which made Adam feel like he was having to ‘behave like a business man’ included a passing mention of the use of Myers-Briggs, much berated on Facebook by Mike Higton, now Professor in Durham overseeing the validation of training in the C of E and other denominations. Equally astute was the study of the forced, slightly artificial friendship with Adam’s most enthusiastic parishioner, Adoha, an issue faced by all clergy who are in a social context which is different from their own natural one. And the little details of longing for a break, misunderstanding in the corner shop, and the pressures and preoccupations of fulfilling multiple roles all ring true. Adam even managed to use the right service book for Communion—even if he waved the wrong one at the Archdeacon!

And yet something was missing. It struck me most forceably in the episode from the previous series, which was published last week in the Church Times. Nigel (the lay reader) is on the brink of suicide as he has not been recommended for ordination training—and it is all Adam’s fault.

You wrote me a bad reference, didn’t you? You know I’d be a better priest than you!

The dilemma here is a distinct one, and it arises (in a strange way) from an over-developed sense of awareness of process. In recent years, processes within the churches, including the C of E, have been articulated much more clearly and explicitly. In part this is a good thing, arising from reflection, but in part it is also a feature of our more bureaucratic, litigious culture. So everyone knows the criteria for selection for ordination; anyone can have a go at imitating the qualities that are specified; and anyone writing a reference has to match comments against these. And those being written about know that they know, and those writing references know that the candidate knows…and that they know they know! The real danger here is that the process becomes inward looking and self-referential, almost like a game of hide-and-seek…unless. Unless the whole thing is not actually about process, but about God. And that is the missing bit.

The Save Your Church course on Rev makes no reference to the idea that God might in fact make a difference, or be part of the process, or that this might all be about something bigger than the institution. God is clearly not part of the Church decisions about gay marriage; it all arises from politics and bureaucracy. As Adam says to the (gay, partnered) Archdeacon:

You don’t even believe in this law yourself!

When Adam prays, it is more a question of muttering to himself in the hope that someone, somewhere, might overhear. But no answers are really expected. And pastoral care is about ‘Bending over backwards to please everyone.’

Of course, the reason why Rev appeals to clergy is that it gives voice to many unspoken dilemmas, and in a sympathetic tone. As the recent Church Times series on the State of the Church showed, it is possible to feel that mission strategy is little more than a marketing exercise. The issues of finance and attendance numbers express the pressure to perform that many clergy feel, whether articulated or implied. Yet without the presence of God actually making a difference in the day to day, everything is reduced to mere processes. And the danger is that you might even get to the point of suggesting that the congregations themselves simply don’t matter—keeping the institution going is what counts!

On Sunday morning, I was aware that the person behind me was new to church. I wondered how he had ended up here; was he from another congregation, or new to faith? What would he be making of all that was going on? Then we reached the Eucharistic Prayer, the great prayer of thanksgiving which locates what we are doing and our remembering of Jesus in the whole sweep of God’s purposes for the world.

You fashioned us in your image
and placed us in the garden of your delight.
Though we chose the path of rebellion
you would not abandon your own.

Again and again you drew us into your covenant of grace.
You gave your people the law and taught us by your prophets
to look for your reign of justice, mercy and peace. (Prayer F)

What a wonderful expression of the good news! So how is it that only 27% of Anglicans feel able to invite friends to church, and still fewer feel able to articulate their faith? Because, in the end, it is not about words, or about processes, or about strategies—unless these point to encounter with God. All the external things are worth nothing without understanding and encounter—the very thing which appears to be missing from Rev.

(I did learn about the visitor after the service, over coffee…)

Our culture does find it very difficult to articulate experience of God, or know what to do with such articulation, which is one reason why it is hard to own up to being a Christian in a workplace environment. And there is also good reason to be sceptical about God-language, since it is so easy for this to be power-language in disguise. But if we give up on it, then all we are left with is cynicism—and self-referential processes.

So I will continue to enjoy Rev and its observations—but will want to add in one other ingredient too.

James Mumford offers a similar comment in the Guardian today, though goes further in arguing that the depiction of church life is actually damaging:

Yet it remains an outsider’s perspective. An insider view of the church would, by contrast, revolve around the reality of shared faith. From the outset, Rev’s operating assumption is that faith is individual. The Rev Smallbone’s prayer monologues are purely personal. Faith is not something held in common. Nor is it transformative. Which is, rightly or wrongly, what people of faith think it is. Perhaps the show’s most wonderful character, the drug addict Colin, is a parishioner Adam is genuinely friends with. But there’s never a question of faith freeing him from addiction.

In imposing its own outsider viewpoint, Rev defies the deepest ideal of a liberal, pluralistic society. In Rev the devout do not speak for themselves and therefore are not permitted to sit at the high table of our national media.

One of the comments below the article compares Rev with Father Ted, and thinks we should be able to laugh at both. But I think James has a point: unlike Father Ted, Rev does appear to claim to offer a window on the reality of church life.

33 thoughts on “The one thing missing from ‘Rev’”