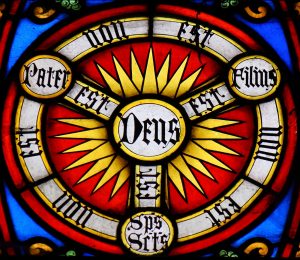 Once more we come to Trinity Sunday. With the various debates about this on social media over the last few years, I dare to hope that the preaching on this Sunday is now better than it used to be—but I worry that I am mistaken here. It is worth reminding ourselves of some key things to hold on to on this day.

First, this is not a day to explain the Trinity! If your preaching has not been Trinitarian all through the year, then you are a heretic! If it is anything, then it is a focal moment which asks you to check how Trinitarian your preaching has been. If you are in any doubt about this, just stick with preaching on the lectionary passages (or whatever other biblical readings you are using this Sunday).

Secondly, we have during the year focussed on various aspects of the work of the Father. More recently we have (in Lent and Easter) focussed on the ministry, life, death, resurrection and ascension of Jesus. Then we have celebrated the giving of the Spirit. So it is quite natural now to celebrate the Trinity. This is not a separate subject; rather, it is a drawing together of the different threads with which this story has been weaved. This reflects the importance of the doctrine of the Trinity in Scripture: it is not explicitly taught (though some texts in Revelation come pretty close), but it is the doctrine without which we cannot make sense of the narrative of Scripture itself.

Thirdly, this is definitely the time to avoid crass heresies, such as modalism (‘water, ice, steam’), tritheism (The Shack) or social trinitarianism (‘We are called to live in perichoretic community’).

So rather than another new posting, I offer here some resources from previous years which I hope will encourage you not just this Sunday, but in all your Trinitarian preaching.

First, I was grateful to share the sermon Mike Higton, Professor of Theology and Ministry at Durham, preached on last year’s Trinity Sunday. To demonstrate that this was not complicated, he preached (almost) the whole sermon in words of one syllable. He concludes:

So there is God, the one to whom we pray, the one to whom we look, to whom we call out, the one who made the world and who loves all that has been made. And then there is God by our side, God once more the one with whom we pray; God in the life of this man who shares our life, this man who lives the life of God by our side, and who pours out his life in love for us. And then there is God in our hearts, God in our guts, God one more time, the stream in which we dip our toes, the stream in which we long to swim, the stream which filled the Son and can fill us too, and bear us in love back to our source.

I have also shared insights from three other, quite different Trinity Sunday sermons, and we find a similar shape in the moving conclusion to former Dean of Durham Michael Sadgrove’s sermon:

In this morning’s gospel, the risen Jesus says farewell to his disciples with the words: ‘all authority in heaven and on earth is given to me’.  It is the climax of the gospel, the culmination of all that St Matthew’s story has been leading up to.  ‘I am with you always, to the end of the age’.  It ends as it began – with the angel’s promise to Joseph that the child would be called Immanuel, God-with-us. The narrative has travelled far since then.  But the promise is the same: that Yahweh the high and hidden one, who is beyond all words and images, the creator of the world and the holy one of Israel, is in our midst, present to us forever as grace and truth.  This is God the mighty and eternal who calls worlds into being and loves us into life.  This is God the compassionate and merciful, who bears on his heart for all time the sorrow and pain of the world.  This is the God enthroned in majesty who answers the longings of the ages and shows us his glory.  This is God who is Trinity of persons, Father, Son and Holy Spirit to whom be all might, majesty, dominion and power now and to the end of time.

Turning to the text of the New Testament, I previously shared my theological comments on Revelation 4 and 5, which offer perhaps the clearest narrative articulation of the Trinity in the Bible:

The language of worship here does a remarkable thing in identifying the lamb as equal with the one on the throne in deserving of worship and adulation—in a text which implicitly refutes the claims of the human figures to be deserving of such obeisance. Because of this, it is reasonable to claim that it offers us the highest possible Christological understanding in the whole New Testament: what we can say of God in worship, we can say of Jesus. The two figures of the one seated on the throne and the lamb are thus characterised as God the creator and God the redeemer. These figures are never quite merged, and remain distinct within the narrative of Revelation and, unlike the association of the Word with the work of creation in John’s gospel, their roles also remain distinct. But in the final hymn of praise, the worship is given to the two as if they were one.

The placing of these scenes of heavenly worship following on from the royal proclamations to the assemblies in the seven cities has a powerful rhetorical impact. The followers of Jesus might be facing particular challenges and opportunities, located within their own cultural and physical contexts—yet the context for all their struggles is this cosmic vision of the praise of God and of the lamb. Where they might feel as though they are ‘swimming against the tide’ in terms of dissenting from the cultural norms of their society—in their participation in the trade guilds with their associated deities, in their moral stance, and in their reluctance to participate in the imperial cult—the juxtaposition of chapters 4 and 5 offers a startling reconfiguration of their world. All of creation is caught up, not in obeisance to the emperor, but in the worship of the God and Father of Jesus, and of the lamb, and any who are not taken up with this are, in fact, in the minority. It is an extraordinary cultural and spiritual counter-claim to the majority perception of reality. And in its emotive extravagance, this vision of worship is not offered as a rational fact, but as a compelling call for all readers to join in themselves.

Three years ago I published a paper by Kevin Giles on Evangelicals and the Trinity. Kevin’s primary focus is the issue of the relationship of the Father with the Son, but his exposition of the Nicene understanding of the Trinity is worth reading as a helpful and clear summary. He comments:

When it comes to the doctrine of the Trinity we are not discussing a theological question where one side can assert something and the other side the opposite and resolution is not possible. In this case, there is absolutely no uncertainty as to what constitutes trinitarian orthodoxy. No other doctrine has been more clearly articulated by the great theologians of the church across the centuries and none more clearly and consistently spelt out in the creeds and confessions of the church.

The Nicene Creed is the definitive account of the doctrine of the Trinity for more than two billion Christians. It is binding on all Roman Catholic, Eastern Orthodox, Anglican, Lutheran, Presbyterian and Reformed Christians. These 2 billion believers agree that anyone who denies what is taught in the Nicene Creed stands outside the catholic faith, and any community of Christians that rejects what the Nicene Creed teaches is by definition a sect of Christianity. On this basis, we do not accept Jehovah’s Witnesses as orthodox Christians because they cannot confess this creed, even though like us evangelicals they uphold the inerrancy of Scripture.

Be assured, I do not place this creed or any other creed or confession above Scripture in authority or on an equal basis with Scripture. For me, and for 2 billion Christians, this creed expresses what the church has agreed is the teaching of Scripture. I believe every single statement in this creed reflects what the Bible says or implies. In my view, we have in this creed the most authoritative interpretation of what Scripture teaches on the Father-Son relationship.

This takes us back to my first article on the Trinity, where I draw on the writing of Stephen Holmes at St Andrews and agree with him that the Trinity is not our social programme.

Holmes points out that there is something of a problem in this way of moving from the relationships within the Trinity to relationship between people, as shown by the radically different conclusions theologians come to about the implications of this move.

For Zizioulas, the monarchy of the Father, as cause of the Son and the Spirit, leads to a monarchical view of the role of the bishop, and they strongly hierarchical, and tightly ordered, church. For Boff, perichoresis  is the decisive principle, and it is completely mutual and symmetrical. (p 26)

So the life of the Trinity is either egalitarian, or it is hierarchical, depending on your viewpoint. The sceptical reader might, at this point, wonder whether this doctrinal discussion is little more than a projection of the theologian’s prior viewpoint on to the blank screen of speculation about God’s inner life. But the discerning reader might also recognise Zizioulas’ hierarchical conclusion in another, rather surprising, context. Conservative evangelicals have also read hierarchy in the relationship between Father and Son, and since ‘the head of every woman is man, and the head of Christ is God’ (1 Cor 11.3) then the hierarchical ordering within the Trinity is expressed not so much in the specific hierarchy of the bishop over the people but generally in the hierarchy of men over women. In this way, debates about gender roles and women’s ordination are elevated to central questions about the nature of God, and are therefore ‘primary’. It is odd that this argument can ever be applied to ministry only, rather than to society in general, though perhaps not as odd as evangelicals being in logical debt to a Greek Orthodox bishop.

Whatever you say tomorrow, may God the Father direct you, God the Son equip you, and God the Holy Spirit empower you and breath life and grace into your every word.

7 thoughts on “Resources for preaching on Trinity Sunday”