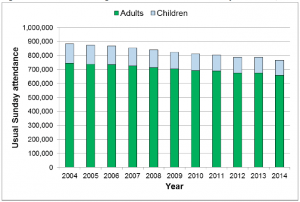 This is the text of an article I wrote for Premier Christianity blog last week.

New figures have been released showing that attendance at Church of England services dropped below 1 million for the first time in recent history in 2014. Although the figure is a little arbitrary (not least because the population of the country is changing), it seems to many like something of a landmark.

Before jumping to too many conclusions, there are some details worth bearing in mind. Firstly, there has been a change in the way that the figures are calculated (measuring attendance is more complex than you might imagine), and so the change from the previous figures (of 2013) is probably not that significant. The more important issue is the trend—which does appear to be continuing downward, as it has for the last 100 years.

Secondly, it is worth remembering that this measure is of Sunday attendance. One commentator (in the Spectator) scoffed at the idea of including attendance at weekday events—but with changing patterns of work, and more and more other things happening on Sundays, midweek events in churches are becoming increasingly important.

Thirdly, as recent analysis in the Economist has highlighted, it is no longer realistic (and hasn’t been for some time) to measure the Christian presence in our country by looking at Church of England attendance alone. The C of E remains the largest single denomination, but ‘new’ churches and Christians amongst the immigrant are growing in importance in the national scene. Alongside this, the shape of the Church of England is also changing; as one person put it, ‘We are not seeing the end of Christianity in this country, but we are perhaps seeing the end of nominal Anglicanism.’

Perhaps the most important thing to remember is that there is nothing sudden about this decline—it is part of a long, complex process in the context of massive changes in British culture. And it is part of Western secularisation; church attendance is diminishing in every part of the wealthy West. There are profound changes taking place in the way in which British people are thinking, believing and behaving, and no-one really knows where this is leading.

So what should be done by the church? There is a strong voice arguing that we need to close the cultural and creedal gap between Church and culture. The Church is out of step with society (so the argument goes) and that makes it harder for those outside the Church to take it seriously. The main problem with this approach is that all observers are agreed that, in important ways, contemporary culture is ‘less Christian’ than it has been in the past. So keeping in step with culture is never going to be a long-term solution.

Within the C of E, there is a push to make better use of management decision-making in thinking about planning, training and selection of leaders, and strategy. That’s probably not a bad idea. One of the greatest challenges facing the Church is the decline in clergy numbers, and that has come about through not much more than very poor planning. But this approach on its own is mostly about avoiding mistakes rather than delivering growth—you cannot treat the Church as if it were a religious retail company.

Others think that there is good grounds for focussing on the distinctives of Christian faith. Historically, the church has grown when it stands out from society, rather than blending in. So, the argument goes, we shouldn’t really be concerned about how others see us or whether we are being ‘effective’. We should simply focus on being what God called us to be, and trust him to do the rest. Perhaps we should even stop analysing attendance figures at all.

But this raises two problems. First, didn’t Jesus say ‘I will build my church’? If we are not growing, if we are not reaching people with good news, then something has gone wrong somewhere. And taking notice of numbers offers important feedback. Christians appear to be as good as anyone at deluding ourselves and avoiding facing up to reality—and taking a good long look at the numbers gives us reality in spadefuls!

Healthy plants grow—they cannot help it. They don’t need to be told to grow, but they do need help to keep healthy. If we are not growing, then it is important to ask whether our churches are as healthy as they should be. In the first days of the church, the believers met together, attended to the apostles’ teaching, shared their lives together, blessed others, and when asked gave a good reason for the hope that they had. Strategies, planning and management techniques will have their place, but I am not sure much will change without our practising the same things as these early followers.

20 thoughts on “What we should do about the decline in church attendance?”