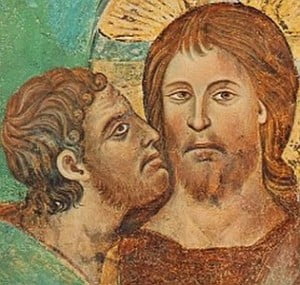 Last week I had the interesting experience of preaching on Mark 14–15.15, which covers the anointing at Bethany, Judas agreeing to betray Jesus, the last supper, Gethsemane, Peter’s denial, Jesus’ trial before the Sanhedrin, and Jesus before Pilate. Whew! But I learnt a lot from the experience.

1. This is not the usual way we treat these passages—most of the time I would imagine we aim to preach on each episode in detail. That is one way to read them, but another (and probably more common) way of reading in the early centuries would have been to have heard larger pieces of narrative, and so have a better feel for the whole ‘shape.’ At St Nic’s we have been working through Mark, and it has been interesting to get more of the ‘big picture’, something I have posted about previously.

2. It was an interesting experience to approach a passage differently. To keep your preaching fresh, I would always recommend trying new and different things, particularly if you have been preaching for a while. Never done a two-minute Pause for Thought on radio? Have a go!

In this case a radical change for me was to not read any commentaries! I wouldn’t normally recommend this, but teaching in a theological college means I spend a lot of time on detailed exegesis, and the danger in my preaching is in filling in too much detail, rather than not having enough. But this time, instead, I simply immersed myself in the text, and I think some interesting things emerged. 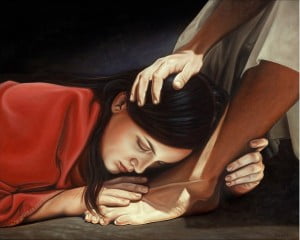 3. The key thing I noticed in doing so was that the gospel narratives in effect give us two narratives intertwined—the narrative of what Jesus says and does, and what happens to him (in this case mainly the last supper, Gethsemane, and the two trials)—and the response of those around him—in this case, the woman anointing him, Judas betraying him, Peter denying him and the trials condemning him.

What is interesting is that I don’t think I have ever asked myself why the gospels write the story in this way—in fact, I am not sure that I have really noticed that the gospels tell the story in this way. This offers yet another distinctive between the canonical gospels and the later non-canonical and gnostic works—there is a clear focus not just on Jesus, his teaching and his actions, but on response to him. This strongly indicates that they were written precisely to challenge the hearer as to her own response.

4. In preaching, I actually focussed on the four (sets of) responses, rather than on the main storyline of what Jesus was doing. This led to a challenge, which is that of ‘psychologisation.’ I always feel very uncomfortable when I hear preachers talking about biblical characters as if they knew them, and supposing they were just like my friends. We do have thing in common—but we also have a lot of things in difference (if that is English)! 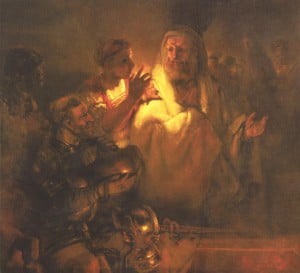 The way around this, I realised, is to look at the narrative characterisation—rather than try and reconstruct the personality ‘behind’ the text, focus on the character ‘in’ the text, as set out in the narrative(s). Something I noticed, which again I had not seen before, was that within the gospel narratives, Peter is frequently involved in discussions about direction and purpose. Jesus’ first call on him is to change his profession; at Caesarea Philippi he challenges Jesus about the direction he is heading; in John 21.18 Jesus predicts that he final destination will not be of his own choosing. I therefore talked about Peter’s concern with where God/Jesus was going.

I took the responses in reverse order, to end with the anointing (so the sermon and reading together formed a ‘chiasm’). Thus the sermon ended up being shaped around the four responses as follows:

• The authorities felt threatened by what God was doing, instead of being honest

• Peter was frightened by where God was going, instead of trusting

• Judas was frustrated by how God was doing it, instead of accepting friendship

• The woman was inspired by all that Jesus was doing, and mirrored his sacrificial giving of himself in love.

You can listen to the whole sermon here.

2 thoughts on “Preaching on narrative”