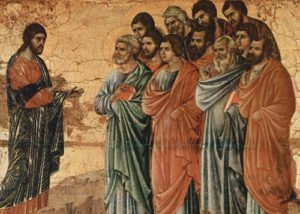 The gospel reading for Trinity 2 in Year A continues to work through Jesus’ teaching on mission in Matthew 10, but has jumped across from the specifics of his sending out the Twelve to more general teaching about being faithful under pressure.

It is easy to see that Matthew has here drawn together teaching of Jesus from several contexts, and integrated it thematically, for at least three reasons:

a. The beginning of this section appears to recount a particular occasion, when Jesus sends out the Twelve, but from Matt 10.16 the context changes to a more general one, and appears to make reference to later challenges in ministry after Jesus has gone, even looking towards the completion of the ministry in Israel in v 23.

b. The material in the later parts of this chapter has parallels in several different places in the gospels, mostly in Luke. So the sending of the Twelve is found in Luke 9.1; the saying about the secret and hidden comes in Luke 12.2; Jesus’ bringing of division rather than peace comes in Luke 12.51, and so on. Some of the later sections of this chapter also reiterate teaching from the Sermon on the Mount earlier in Matthew—and there are several sayings which are unique to Matthew.

c. Though this is presented as continuous discourse, there are some sudden changes of subject, language and focus (for example, at Matt 10.24, 10.26 and 10.34) so that commentators differ on how to understand the overall structure of this section.

Because of this, there is a wide diversity of material, and different elements of the text raise some large and important issues. The challenge in preaching on this passage as the lectionary will be to find a coherent set of issues that relate to the contemporary context of preacher and congregation.

Before looking at the text within our lectionary reading, it is worth just noting the extent of the previous discourse up to verse 23. Jesus’ general description of opposition, division and persecution ends with a prediction that the disciples’ mission to ‘all the towns of Israel’ will not be complete ‘before the Son of Man comes’. There is a long history of Christian interpretation of this text which understands this as a reference to Jesus’ return—but this would make not only Jesus mistaken about the imminence of his parousia, but Matthew also either mistaken or happily recording that Jesus is mistaken, which would be rather odd. In fact the quasi-technical term parousia does not occur here (and in fact only occurs in Matt 24 in all the gospels); instead, Jesus is alluding to the ‘coming of the Son of Man’ in Daniel 7.13, in which this human figures comes not to the earth but to the throne of God in heaven, and is vindicated by being given authority and a kingdom. As with Matthew 24, this phrase is therefore Matthew’s way of talking about what Luke describes as Jesus’ ascension.

The comparison of a servant or slave with his master in Matt 10.24–25, and the analogous relationship of the disciple with his teacher (or rabbi) is unique in this form to Matthew—but it has some fascinating parallels in the other gospels. There is a partial parallel in Luke 6.40, in the context of the question of growing into maturity, and in John 13.16 as Jesus gives the example of washing the disciples’ feet. But the strongest parallel comes in John 15.20, where Jesus connects the question of greatness with persecution, as in these verses.

Jesus has previously talked of his disciples as ‘slaves’ in Matt 6.24, either of God or the rival Mammon. But it is striking here that the analogy is with Jesus himself, suggesting the possibility that he (rather than God) is the master of the ‘slave’ disciples, a remarkable suggestion with Christological implications. (There is a parallel metaphor in Luke 17.10, though this saying does not specify who the master is.) The language of ‘slave of Christ’ is used in the apostolic writings (Rom 1.1, Gal 1.10, Phil 1.1, James 1.1, 2 Peter 1.1 and so on), but within this gospel…

it is a striking turn of phrase which speaks strongly of Matthew’s sense of the unique authority of Jesus in relation to those who have been called to follow him (R T France, NICNT, p 401).

It would, of course, be the aspiration of any disciple to become like his rabbi within the Jewish tradition—and the disciple would choose as rabbi the person they wished most to emulate. But Jesus offers a challenging twist here, in that the disciple here becomes like his master in suffering accusations and abuse. This finds expression in Paul in his desire to ‘share in his sufferings, becoming like him in his death’ (Phil 3.10).

The next section connects back to earlier verses with reference to ‘fear of them’, whose antecedent is both those who have accused Jesus of being Beelzebul but who in the previous section will persecute the disciples. The command ‘do not fear’ is explicated in three ways.

a. In Matt 10.26–27 they should not fear because that which is hidden will become known. There is a suggestion in the parallel in Luke 12.2 that this points to the open judgement about things that have been said in secret—but the parallel in Mark 4.22 agrees with the emphasis here, that Jesus’ teaching ‘secretly’, to his disciples, will in time be proclaimed in public for all to hear; where Luke implies the inevitability of proclamation (‘it shall be proclaimed’ Luke 12.3), Matthew interprets this as a command (‘proclaim from the rooftops!’). In first century Israel, the flat roofs on houses, often set above one another on a hillside, were a natural place from which to make announcements to the street below.

b. In Matt 10.28, Jesus challenges us to recognise who has ultimate authority, and who therefore we should rightly ‘fear’. The word translated ‘soul’ here is psyche from which we get the word ‘psychology’. In the NT we should not read into it Greek ideas of the ‘immortal soul’ as the real nature of a person, trapped in a fragile and perishable body which one day we will cast off, since the biblical vision is that humanity is a ‘body-soul’ unity, and our future hope is for bodily resurrection, not a disembodied ‘soul life’ with God. English translations frequently render the term by the word ‘life’ (see Matt 6.25). Similarly, the word for ‘hell’ as a place of destruction should not be understood as a mediaeval place of eternal torment; the word here is Gehenna, the valley outside of Jerusalem Ge Hinnom where the rubbish was dumped, and from which smoke rose continually as the rotting rubbish smouldered. Here we have a vision of God’s authority and judgement in continuity (and not contrast) with the OT; Swiss commentator Ulrich Luz notes:

Our texts is especially ill-suited to contrast a Jewish God of fear with a Christian God of love (cited in France, NICNT, p 403)

c. We are not to fear others because God cares for us. The language here comes close to the ‘wisdom’ imagery of the natural world that we find earlier in Matt 6.26–30, including mention of the ‘birds of the air’ (here, ‘little birds’).

Fear of God is balanced by trust in God as the disciple’s Heavenly Father [a repeated theme in Matthew]: the God who can destroy in hell is also the God who cares for the smallest bird. Within his fatherly care, there is nothing to fear from human hostility (France, 403).

The conclusion to this section is expressed in a double parallel typical of Hebrew poetry (acknowledge me/I acknowledge; deny me/I deny) which makes Jesus’ teaching both powerful and memorable. This both shifts the question of judgement from the judgement by others of me to the ultimate judgement of me by God—which must be so much more important. What is remarkable here, and again in line with Matthew’s high Christology, is that the judgement of God turns on the testimony of Jesus about us.

Our reading concludes with the challenging sayings about Jesus bringing division, which we also find, slightly recontextualised, in Luke 12.51. By putting it here, Matthew is telling us some important things about division and difference. First, it comes in the context of Jesus’ call and the disciples’ vocation to mission. It is in following Jesus and proclaiming the kingdom that the disciples will first encounter the sense of division arising from differential response to the message that they bring.

Secondly, the response to Jesus redraws the boundaries of loyalty, so that whatever pattern of loyalties and affiliations people had previously, these are now radically challenged and reconfigured by their response to Jesus. In the first century, one’s primary loyalty was to one’s family and kinship group—which is still true in many parts of the world today. (At its best, this gives people a sense of communal solidarity; at its worst it leads to tribalism and conflict between kinship groups.) Jesus’ call on the disciples has already driven a cart and horses through this kinship loyalty; we mostly miss the most poignant phrase in the call narrative of Mark 1.20:

This is a constant theme, and comes again twice immediately following the ‘division and sword’ saying:

The first of these sayings is rather puzzling, since it quotes from Micah 7.6 and refers to the loss of moral probity that results from the people’s drift from God’s teaching—but here Jesus appears to be drawing on the wider theme of the chaos to be expected in the time just before God comes to his people again—so the theme is eschatological expectation. The second saying appears to be Matthew’s softening of the saying in Luke 14.26 ‘Unless you hate your father and mother…’ which of course deploys characteristic Jewish polemical contrast to highlight the importance of loyalty to Jesus—in a context where ‘honouring your father and your mother’ (Ex 20.12) was paramount.

This redefining of kinship allegiance in relation to Jesus becomes quite explicit two chapters later when Jesus is challenged by and about his actual family:

He replied to him, “Who is my mother, and who are my brothers?” Pointing to his disciples, he said, “Here are my mother and my brothers. For whoever does the will of my Father in heaven is my brother and sister and mother.” (Matt 12.48–50)

The third, related theme is that of participation. The radical loyalty to Jesus demanded of the disciples in fact means that Jesus is (in effect) present where they are present, so that response to the disciples (‘Anyone who welcomes you welcomes me, and anyone who welcomes me welcomes the one who sent me’) is response to Jesus—which again has Johannine overtones. This connects with Paul’s understanding of the nature of the ‘church’, and Dick France declares that this is the nearest Matthew gets to a Pauline theology of ‘the body of Christ’. (So perhaps Matthew, John and Paul are not as far apart in their theology as we are often led to believe…)

Earlier this week, I read a fascinating argument against the idea that the current pandemic requires us to develop resilience, since this is a negative term that focusses on the idea of just getting through. Instead, the author argues that we should, in the face of testing and trials that this situation brings to us, think about developing the quality of audacity. He concludes:

As resilience pussyfoots in the dark groping for the light switch, audacity ambles with darkness long enough to behold its stars. Let resilience keep its good life. Only audacity can chart nocturnal joy.

I think Jesus would agree!