Matthew 24 is the reading set for the fourth Sunday before Advent (i.e. in the countdown to Advent at the ordinary season comes to a close) and its parallel Mark 13 is the reading for the first Sunday of Advent. There is much confusion about both these passages (and the parallel in Luke 21), and there appear to be two main ways it is read.

The first reading is very widespread, both amongst ‘confessional’ readers and ‘sceptical’ ones, for a range of reasons.

Firstly, there is a close association between the events in the first section and language of ‘the end.’ Matt 24.6 mentions that ‘the end is yet to come’ and 24.13 talks of standing firm ‘to the end.’ Secondly, in Matt 24.14 Jesus talks of the gospel being preached ‘in all the world’ and then ‘the end’ will come. Thirdly, Matt 24.21 talks of great distress ‘that will never be equalled.’ Fourthly, there is language in Matt 24.27 of the ‘coming of the Son of Man.’ Then in Matt 24.29, we are told of cosmic signs of the end of the age, after which in Matt 24.30 again the ‘coming of the Son of Man’ will be seen by ‘all the peoples of the earth.’ Finally, in Matt 24.31, there is a trumpet call, and the angels gather the elect from the ends of the earth. Some also see a parallel between what is described here, and the ‘end times’ judgements of the seven seals in Rev 6.

This all looks fairly compelling, so should make for a short blog post—except for one vital thing:

Amen I say to you, this generation will certainly not pass away until all these things have happened. (Matt 24.34)

Jesus’ saying here is quite emphatic in form, including the emphatic form of the negative, mentioning ‘all’ these things clearly, and opening with the ‘Amen’ formula, characteristic of Matthew’s record of Jesus’ teaching, and suggesting recollection of Jesus’ actual words in Aramaic.

This is very difficult to evade. Some people suggest that the word ‘generation’ genea could be translated as ‘nation’ or ‘race’ rather than ‘generation’. But there is only one other occurrence in the gospels where this could be the reading—in Luke 16.8. Even here, the contrast is between people of this age and those ‘of the light’, so there is a temporal sense here. But in all other cases, the word clearly has the sense of ‘the people alive at this time.’ The clearest examples are in the genealogy in Matt 1.17 ‘fourteen generations’, and in the Magnificat in Luke 1.48 and Luke 1.50 ‘his mercy extends to those who fear him, from one generation to another.’ Along with this, the verse itself has a clear temporal sense in talking of it ‘not passing away.’

(A minority reading argues that ‘this generation’ refers not to the generation Jesus is addressing, but the ‘end times’ generation of some time in the future to whom all these things will happen. Apart from making this saying completely tautologous, such a reading has the minor disadvantage of making the term mean whatever the reader wants it to mean, rather than what Jesus actually said. If he is looking around at his disciples and uses the word ‘this’, then he is referring to them!)

This all makes the first approach problematic, and led C S Lewis to comment:

Such a view also proposes that, in these verses, we have a confused mixture of predictions about the near and the distant future, which suggests Jesus didn’t really know what he was talking about, or the disciples didn’t, or the gospel writers didn’t—or all three. More seriously, it has made not a few scholars conclude that Jesus thought his return would be within a generation, and that he was clearly wrong—he was a failed apocalyptic prophet, and the writers of the NT tried (unsuccessfully) to cover up the fact.

The difficulty with this last conclusion is that Matthew, Mark and Luke all record Jesus saying this. Unless you think that all three gospels were written before the destruction of the temple in 70 AD, then you have to conclude that they also believed Jesus expected his return within the generation and that subsequent generations of copyists believed this, but somehow ignored it. This seems altogether implausible. All the evidence points to the gospel writers taking Jesus seriously, and thinking that their contemporaries needed to know what Jesus said.

How can we make sense of this? A first massive clue comes in comparing the parallel passage in Mark 13 with Matthew. The first section of Matt 24 equates to Mark 13.1–31; if you look in a Synopsis (which puts the passages from the different gospels in parallel with one another) you can see that Matthew and Mark are almost identical (with the exception of Matt 24.10–12). But in the second section, Mark has just 6 verses, whereas Matthew continues with 16 more, and then in chapter 25 records a series of Jesus’ eschatological parables about final judgement (the bridesmaids, the parable of the ‘talents’, and the sheep and the goats).

A second massive clue comes in noticing Matthew’s distinction between ‘this’ and ‘that’. In Mark 13.4 the disciples ask Jesus a single, compound question about the temple, prompted by his comment that ‘not a single stone will be left on another’:

“Tell us, when will these things happen? And what will be the sign that they are all about to be fulfilled?”

But in Matthew, the compound question has become two questions:

“Tell us,” they said, “when will this happen, and what will be the sign of your coming and of the end of the age?”

For some reason, Matthew appears to want to distinguish more clearly between the question of the destruction of the temple, and the question about Jesus’ coming and the end of the age. Matthew continues the distinction, by being clear that in the first section, Jesus is talking about ‘this’, but at Matt 24.36 he introduces a marked change of focus: ‘But about that day or hour, no-one knows…’ The most obvious explanation of this is that Matthew is writing after the temple’s destruction in 70AD, but Mark was writing before it. So for Mark, the impending fate of the temple looms large; for Matthew, this has now passed, and the question of Jesus’ coming deserves more attention.

What, then, do we make of all the material in the first section which looks as though it is referring to ‘the end’? It doesn’t need to be read in this way at all.

Note first that emphasis of Matt 24.6 is not to associate these events with ‘the end’, but to distinguish them. ‘The end is not yet.’ And in 24.13 and 24.14, the word ‘end’ is not the (semi-technical) term eschatos (as in ‘the last days’) but the more general term telos. Secondly, we might be conscious that there is more preaching to be done, but the word oikumene is best understood as referring to the known world. It does seem that preaching to the whole (Roman) world was Paul’s goal, and Luke (in Acts) does appear to think that that is what he has done, ‘with all boldness and without hindrance!’ (Acts 28.31)—and all before the fall of Jerusalem. Thirdly, the distress of the siege of Jerusalem was indeed terrible; Josephus recounts a story of a woman killing her baby and eating half of it, offering the other half to rebel fighters (Jewish War chapter 6), and more Jews were killed by other Jews than by the Romans.

But a key observation is to note the language of the ‘coming of the Son of Man.’ The word for Jesus’ second coming to earth, parousia, does not occur in Matt 24.30. The phrase instead is the ‘erchomenos of the Son of Man’. This is an almost direct quotation of the Greek of Dan 7.13:

“In my vision at night I looked, and there before me was one like a son of man, coming with the clouds of heaven. He approached the Ancient of Days and was led into his presence. He was given authority, glory and sovereign power; all nations and peoples of every language worshiped him. His dominion is an everlasting dominion that will not pass away, and his kingdom is one that will never be destroyed.”

In other words, this is not about the ‘Son of Man’ coming to earth, but his coming before God, receiving authority and being vindicated. Note that he exercises authority over ‘all nations and peoples’. Jesus also quotes this—in exactly the same words—to the High Priest in Mark 14.62. Here Jesus cannot be talking about his return—he refers to himself sitting at the right hand of God and exercising the power of the kingdom, which the priest believes to be blasphemy. And he says that the High Priest will witness Jesus’ vindication and authority; he will see Jesus raised from the dead and the Spirit coming to equip the disciples as witnesses not just to Israel but to all nations. 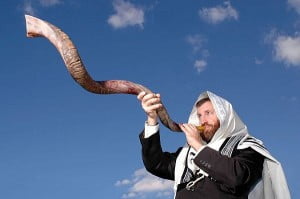 This also makes sense of the final parts of our puzzle. The ‘trumpet’ is not the ‘last trump’ of 1 Cor 15.52 and 1 Thess 4.16, but a metaphor for the proclamation of the gospel which we read about in Acts, and the ‘gathering of the elect’ is the entry into God’s people of the Gentile believers. But what of the cosmic language: ‘the sun will be darkened, and the moon will not give its light; the stars will fall from the sky, and the heavenly bodies will be shaken.’? Note that this is to happen ‘immediately’ after the distress of those days. Well, these words from Isaiah 13.10, Isaiah 34.4 and Joel 2.31 are also quoted soon after—by Peter at Pentecost:

In the last days, God says, I will pour out my Spirit on all people…The sun will be turned to darkness and the moon to blood…And everyone who calls on the name of the Lord will be saved. (Acts 2.17–21)

Peter appears to understand what is going on in front of him in exactly the same words that Jesus uses in the first section of Matt 24—all happening within the life of that generation.

So that is why I go with option 2 above. The first part of Matt 24 is indeed about the destruction of the temple, but also about the remarkable thing that God would do before that happened—Jesus’ resurrection, the gift of the Spirit equipping the disciples, and the good news about God’s kingdom spilling out beyond the bounds of God’s historic people to be proclaimed to the whole known world. And in all these events, Jesus would be vindicated and take his seat at the right hand of the Mighty One. It is only at Matt 24.36 that Jesus moves on to teach about his second coming to earth.

It is worth noting that, at this historical, cultural and linguistic distance, this is a difficult passage for us to read well. But it is also worth noting that we are significantly impeded in reading carefully by the weight of interpretative traditions here. Worse, a number of Bible translations are misleading. Scofield, in famous 1909 Dispensationalist study Bible, actually changed the word ‘generation’ to ‘race’ in v 34 in order to support his interpretation. And today’s New Living translation actually adds the word ‘return’ in v 33 to do the same thing. It has never been more important to read a good translation.

For a fuller discussion of New Testament eschatology, including how to read the difficult passages, see my Grove booklet Kingdom, Hope and the End of the World.

(A version of this was first published in 2013)