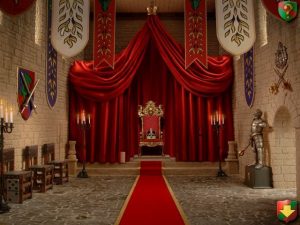 To the seven churches in the province of Asia: Grace and peace to you from him who is, and who was, and who is to come, and from the seven spirits before his throne,  and from Jesus Christ, who is the faithful witness, the firstborn from the dead, and the ruler of the kings of the earth.

To him who loves us and has freed us from our sins by his blood,  and has made us to be a kingdom and priests to serve his God and Father – to him be glory and power for ever and ever! Amen.

“Look, he is coming with the clouds,” and “every eye will see him, even those who pierced him”; and all peoples on earth “will mourn because of him.”

So shall it be! Amen.

“I am the Alpha and the Omega,” says the Lord God, “who is, and who was, and who is to come, the Almighty.”

It is a natural question to ask in any new situation. It’s the question we unconsciously ask when we enter a room where others are present, when we start work at a new company, when we visit a family. Who’s in charge? Who is the one with influence, the one who makes decisions, the one whose good opinion we need to court?

It is a question that confronted the followers of Jesus living in the province of Asia (western Turkey) at the end of the first century in a particularly sharp way. The early Christian movement was emerging from being identified with Judaism, whose eccentricities the Roman powers had grudgingly become accustomed to, and so afforded the status of a religio licita (‘permitted religion’) whose members were exempt from the usual tests of loyalty to the emperor. But gentile followers of Jesus enjoyed no such privilege. They had learnt that ‘Jesus is Lord’ (Rom 10.9) but were under constant pressure to confess that ‘Caesar is Lord’.

It is to such people that John wrote his revelatory-prophetic letter that we now call the Book of Revelation. By calling it a ‘revelation of Jesus Christ’ John claims it to be spoken by the Spirit of God (compare 1 Cor 14.6) testifying to God’s plan of salvation in Jesus (Gal 1.12) and anticipating Jesus’ return (compare 2 Thess 1.7). But what is most striking about it is the dramatic claims John makes about God in his three-fold epistolary greeting.

He has been commissioned to write by ‘Lord God Almighty’ (1.8), using the language of Israel’s God, ‘Yahweh of hosts’. It is he who is the origin and the goal of the whole cosmos, displacing every God in the Roman pantheon. God’s redemption of his people has been effected by Jesus Christ (he has ‘freed us from our sins’ 1.6), who not only ushers in the promised age to come (‘firstborn of the dead’, 1.5) but is in fact the rightful ruler of the present age (‘ruler of the kings of the earth’) even though many do not yet acknowledge this. He refused to give way under pressure and opposition, even to the point of death, and so as ‘faithful witness’ (Greek martys) offers an example for John’s readers to follow. Between God the father and Jesus, John sends greetings from ‘the seven spirits’, one of the unusual ways John describes the Holy Spirit, who is not only ‘before the throne’ in God’s presence, but is also the ‘eyes of the lamb’ seeing all that is happening on earth (5.6) and speaking to us the voice of Jesus (‘Thus says…hear what the Spirit says…’ 2.1, 7 and in each message).

John is offering us the most theologically developed vision of God, later in Christian theology described as ‘Trinity’. This is a God who knows us, who knows the joys we experience and challenges we face. This is a God who has given himself for us, and continues to speak to us and empower us with his presence. He is the one we are called, above all and in all circumstances, to be faithful to—just as he has promised to be faithful to us.

(This a slightly longer version of the ‘Word for the Week’ published last Monday by LICC, the London Institute of Contemporary Christianity.)

1 thought on “Who’s in charge around here?”