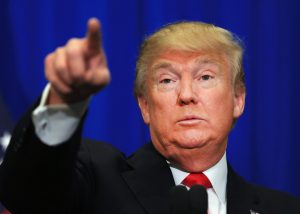 One of the great puzzles of modern politics is why Donald Trump has done so well when so many people dislike him (and Hilary Clinton too—the US Presidential election is being contested by the two most disliked politicians of modern times). Part of the answer is to be found in his willingness to think the unthinkable and propose the politically implausible, such as rejecting the continued move towards globalisation, and ordinary people like this.

But an important part of the answer comes down to the way he uses language. Earlier this week, my daughter Becca was shown this analysis of Donald Trump’s use of language, and she found it so fascinating she shared it with me. It’s worth watching the full six minutes.

I thought the commentator’s final observations were very telling.

You could never accuse Trump of being smart or well-informed. But that’s because Trump is a salesman. The best salesman could sell you a TV without knowing anything about the TV. It is not about the TV—it is about you.

But the most challenging observation was about how Trump compares with his rivals. Other presidential candidates have come across as typical politicians who ‘sound sophisticated but accomplish nothing.’ The reason why that is so challenging is that it is a phrase that could be used of much preaching. Trump doesn’t have much of a message—but somehow he communicates to people. If you are a preacher, then you have the best message in the world—so how come we don’t see it change people as much as we might expect?

The particular challenge here is to ask how the language we use in our preaching—and in all our theological speech, including liturgy—relates to the educational level of our congregations. Even more pointedly, how does it relate to the educational level of those who do not (yet) attend? There are several reasons why this is a sharp question, particularly for Anglicans. The first is that, on average, clergy have historically been better educated than the population as a whole. And, unless you are in a very unusual situation, it is almost certain that the educational level of your congregation will be higher than the overall population in your area. The Church of England has mostly appealed to the more educated, and mostly signalled failed to engage with (for example) working class culture.

I am conscious that this is a very awkward issue to raise—not least because it can easily sound very patronising. (I would be interested to hear responses on this from any lay readers of the blog). And yet it has been a major concern in driving recent liturgical changes in the C of E. The alternative Collects, the additional baptism texts, and the additional Eucharistic prayers have all been produced in response to a request for simpler language. The common reaction to these changes—and, if I honest, my major concern—is what we lose, pastorally and theologically, in move from more theological to less theological language.

Last Sunday I presided at Communion in a mixed ethnicity, inner urban congregation, and we used Additional Eucharistic Prayer 1. Instead of Jesus explaining that the cup was ‘the new covenant in my blood’, he says ‘This is my blood, the new promise of God’s unfailing love.’ Immediately I can see the problems: Jesus did not say ‘This is my blood’ but ‘This is the covenant’, and this change could be significant. And ‘covenant’ means much more than what we would associate with ‘promise’. Yet the striking thing is that ‘promise’ is a word that we would use in everyday speech, so is familiar to us and accessible; not so with ‘covenant’. I wonder how many in the typical Anglican congregation could explain what ‘covenant’ means and why it is important?

One of the key issues here is the theological teaching and equipping of the whole people of God, not in order for them to do more within the church, but so that they understand and make theological sense of their calling and discipleship in the wider world. When I have been visiting the States, I have been impressed by the numerous churches who, as part of their regular programme, include ‘Adult Sunday School’; it is expected that adults, and not just children, will have teaching sessions designed to deepen faith and understanding beyond what can be achieved within a usual Sunday service. This model—of teaching and learning in groups and then coming together for a service of some sort—actually takes us back to the probable pattern of the synagogue in the first century. I have come across it in some non-conformist churches, but never once in the Church of England.

Until this becomes a more normal part of church practice in the UK—and particularly in the Church of England—the gap between language and understanding is likely to remain. As long as the gap is there, then we either need to simplify our language or raise our understanding—or both. Perhaps there is something we can learn from Donald Trump after all.

17 thoughts on “What can Donald Trump teach us about preaching?”