David Walker, Bishop of Manchester, has done some research on the distinctive needs of occasional attenders who might come to Christmas services, but don’t attend the rest of the year. This appears to be an important group; I have noticed this year how many people are reporting increased attendances at carol services, and we saw the same at St Nic’s in Nottingham.

Some things were slightly surprising about this group.

Typically, two-thirds positively believed in specific details of the Christmas story: the shepherds, stable, and Wise Men. All but a tiny proportion of the rest were unsure. Only 13 per cent, however, felt that the facts were more important than the mystery. Half felt closer to God at Christmas, and yet more thought Easter to be, for them, the more important festival.

But other things were less surprising.

They were noticeably pluralist: they were far more likely to agree that all world faiths lead to God than that Christianity is the only true religion…On moral issues they were progressive: only 28 per cent disagreed with ordaining gay men as bishops.

(I wonder why a bishop labels this view ‘progressive’—or even why this is an important question to ask occasional church-goers at all…?). In other words, this is what you would expect to find in a respectable fringe group who think positively about church.

Out of this, David offers some helpful advice.

But in amongst them is one extraordinary suggestion:

Not a good idea? Really? Here is a group of people, open to Christian things (possibly because they have attended church in the past) but without regular commitment—and it is not a good idea to preach? This is a very odd suggestion, for several reasons. First, it is not very Anglican. If you look at the ordinal and the 39 Articles, it is clear that the Anglican understanding of ordained ministry is that it is one of both word and sacrament—that preaching is as important as mystery, explanation as important as experience. (That is why, as Andrew Atherstone points out, it is historically odd that we are very happy with the delegation of preaching to lay ministers, but feel uncomfortable with delegation of eucharistic presidency to lay ministers.)

It is a particularly odd suggestion in relation to Christmas. The Christmas story itself is full of announcement and proclamation—indeed, if there is one thread running through every aspect of this multi-faceted story, it is that of proclamation. Gabriel to Zechariah, Elizabeth and Mary, the dreams of Joseph, the angels appearing to shepherds, the Magi to Herod—how odd it would be to have no proclamation regarding a story of successive proclamations.

And what a story we have to proclaim. Peter Wilby was editor of the Independent on Sunday from 1995 to 1996 and of the New Statesman from 1998 to 2005—and is an atheist. Yet he loves to celebrate the Christmas story:

Nothing draws me more to religion than Christmas. That is not because I lose my atheist faith but because I intensely dislike all the commercial baggage and babble that surrounds the festival. So, in a spirit of protest, I shall try to attend at least one carol service and possibly a midnight Mass, too, as well as listening at 3pm sharp on Christmas Eve to the Radio 4 broadcast of the Festival of Nine Lessons and Carols from King’s College, Cambridge.

All religions have stories at their heart. Christianity, to my mind, has the best: an omnipotent God who chooses to be incarnated as a human, born in the most humble circumstances imaginable. Whether or not we are believers, we should all celebrate that story in the coming days and ponder its meaning.

Pondering the meaning of this remarkable story is going to be a lot harder for occasional visitors unless there is some explanation or exposition of the story itself. The carols on their own will not do this.

So why would David Walker resist this? There are, perhaps, two clues in his article. The first comes early on with the only other reference to preaching.

There has always been a type of mission that ignores context, and simply struts its stuff. It is best illustrated by those who stand in city-centre streets, clutching microphones and tracts, and harangue shoppers and commuters with their favourite Bible verses. 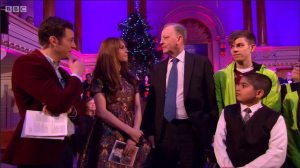 If this is your understanding of preaching, then no wonder you suggest avoiding it. But the best response to bad use is not no use—it is good use. There was a brief but wonderful example of this last week on the One Show. The final scene came from carol singing in All Soul’s, Langham Place, and Matt was talking to the Rector, Hugh Palmer.

HP: Giving appeals to our common humanity—I suspect the people who gave came from all faiths and none.

Matt: And that’s at the heart of the Christmas message that you would like to give…?

HP: Well, we often talk about charity beginning at home. But I think that charity begins with God, the good God, who is highlighted at Christmas. He looks and doesn’t just see children in need, but a world with all kinds of needs, and gives extravagantly, and not with a cheque, but gives himself, Jesus, and that’s the heartbeat of Christian giving. We don’t give so that God will give to us. We give, we love, because he first loved us—and that’s Christmas.

Matt: Well, thank you for that message…

It was a superb example of a concise, contextual and clear exposition of the Christmas story—to someone who came with rather different assumptions but some sympathy and openness.

The second clue about this reluctance to preach arises from the research questions. Although the attenders have been asked about the details of the Christmas story, and some broader questions about belief in God, they don’t appear to have been asked about the meaning of this story. Again, this is curious, since the New Testament stories themselves are laden with meaning and significance. As we can quickly tell, they are no mere recounting of facts. This tells us something important about this kind of research: the assumptions you put in are going to be the assumptions you get out. So if you don’t think that explaining and understanding the Christmas story is a priority as you start the research, your conclusions might just miraculously confirm this!

(Something similar has happened with the research into ‘ordinary theology’. It turns out that the majority of ordinary Anglicans don’t have a particularly orthodox understanding of either who Jesus is or what he achieved. And apparently, to take this seriously we don’t need to teach about orthodox Christian faith—we need to redefine it to include these views!)

Underlying this appears to be a lack of confidence that the story itself is compelling and attractive. If the Star Wars phenomenon tells us anything, it is that people love a good story. And there is no story as engaging and compelling as the story of the Word made flesh.

So, this Christmas, do preach. Make it contextually appropriate. Make sure it sounds like good news to those who might not have heard it before. Make sure you hold out the compelling truth of the story, and how it promises so much more. Make sure you focus, not so much on what people did or what we should do, but what God has done.

But whatever else you do—preach!

47 thoughts on “Should we preach at Christmas services?”