Last week, returning from a half-term break in France, we had a tyre blow out on the autoroute and, since almost everything is closed on a Sunday in France, we had an unplanned extra day there. We stayed over in St Quentin, a town of ancient foundation which was the capital of the war-like Viromandui, a Celtic tribe, during the reign of Caesar Augustus. It takes its name from Quintinus, who was martyred there in the third century; little is known about him, though his cult was popular in the Middle Ages, and several towns are named after him.

What I didn’t know about St Quentin was that its basilica is one of six important French church buildings which contain labyrinths, the best known of which is Chartres. The one at St Quentin follows the same pattern as Chartres, though is slightly smaller and based on an octagon rather than a circle, so its lines are straight and segmented rather than curved. But it is superior to Chartres in that it is always accessible to the public, whereas at Chartres the labyrinth is usually covered with chairs, and only cleared for walking on once a week. I have long been interested in labyrinths, and had even drawn up plans to build one in the theological college where I was on staff. So I took the opportunity to walk around it.

I thought that I would mostly be struck by the twists and turns of the pathway, and the frustration of not getting to the centre very quickly. (My daughter, who walked it, commented three-quarters of the way through ‘Does life really take this long?’) I was, but not quite in the way I had expected. There were three significant phases to the walk. 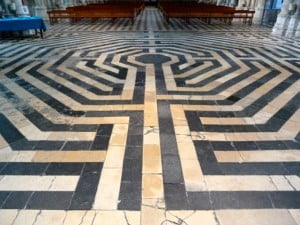 1. On starting the walk, the path takes you almost to the centre, though with one minor detour. When you get as close to your goal as you can without reaching it, it is then that you start to turn away and meander back outwards. This seems to me to correspond (deliberately or not?) to the energy and dynamism of youth, which often has the conviction to take the shortest route to a goal. This is not the whole story of life, but it is surely an important part of it. As Emma Ineson notes on the Trinity College leadership blog, one of the things young leaders bring is a stimulus to ‘get on with it!’

Many younger people are fed up with the cynicism and apathy of previous generations and want to get on with making a difference, changing things where they are not as they ought to be.

There is great physical and emotional energy that often comes with youth and while, of course, younger people need to learn the discipline of stillness and reflection, we must encourage their hunger and willingness to see faith spelled out in actions. Many of our students in their church placements act as catalysts in their local communities, helping to put feet and hands on the command to feed the hungry, visit the prisoner and spread the good news of Jesus in both word and deed. 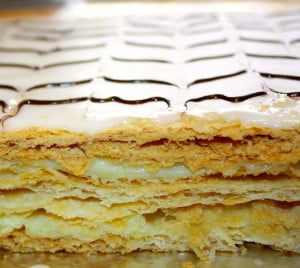 2. In the middle phase, there is much walking to and fro, apparently retracing one’s steps in a similar place, though in parallel, rather than on top of, the path that was taken before. Where perhaps I had expected this to signify a sense of frustration when there appeared to be little forward progress in life, the effect was rather the opposite. As I watched the path I traced, it spoke of the layered nature of mature thinking and living. Life is much more like a mille feuille than a sponge cake—layered and textured rather than homogenous and uniform.

3. The final phase of the walk was the most surprising. The path is designed so that, having created the multiple layers in the middle phase, you then walk around the outside, surveying all the has gone before, and almost reaching the point where you started. You then turn towards the middle and, again with a short detour, suddenly reach your goal—and this time it is for real. Having seen the goal, turned away from it, and meandered for some time, the goal is reached with surprising suddenness. 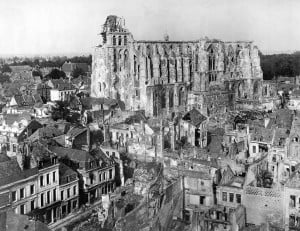 It was a fascinating and surprising journey—and all the more poignant given the context. St Quentin was a town that had flourished because of its textile trade, but had also been in the wrong place at the wrong time all through history. It was devasted by the English in the Hundred Years’ War. More recently, it was again badly damaged in the Franco-Prussian war in the 1870s, and once more devasted in the First World War; the Somme flows through it, and sites of some of the worst fighting are just a few miles away. The nearby Thiepval memorial is inscribed with the names of more than 20,000 soldiers whose bodies were never found in the mud. Such was the destruction that St Quentin’s population did not recover to pre-WW1 levels until the mid 1950s.

The day after visiting the labyrinth, I was delivering some teaching on discipleship in Mark’s gospel, and found a curious correlation between the narrative shape of Mark and the phases of the St Quentin labyrinth.

The gospel starts off with a very direct opening, presenting the good news of Jesus, Messiah, whose paths are ‘made straight’ by the messenger who goes ahead of him. After a brief detour on the ministry of John the Baptist, we appear to get straight to the heart of the matter—Jesus’ proclamation of the kingdom of God being at hand, and the urgent need to repent and believe. Jesus never hesitates in ‘getting on with it’—one episode happens ‘straightway’ after another in a tumble of energy and excitement.

After all this direct action, in chapter 8 the disciples appear to ‘get it’, to understand who he is, the Messiah (Mark 8.29). But no sooner has this happened than a greater detour takes place; it is clear that the disciples have little grasp of what this might actually mean for Jesus and for them. Following the way of the cross is a detour that they certainly had not anticipated. Interestingly, Mark (as distinct from the other gospel writers) actually builds up the layers of the journey quite deliberately; the whole of chapter 8 is a parallel retracing of events in chapters 6 and 7, involving a feeding of a crowd (6.30, 8.1), a trip in a boat (6.45, 8.13), teaching about the Pharisees (7.1, 8.15), and a healing of a man (7.31 and 8.22). Just as the blind man, who after Jesus’ first healing sees ‘people as trees walking’, needs a second touch, so the disciples need a second touch, a third, a fourth and more, before they really understand.

But after all the detours and the meandering, the end of the gospel comes with a surprising suddenness. After Jesus has encountered the whole range of responses, from the celebration of the women who anoints him, the betrayal of Judas, the rejection by the authorities, and the denial by Peter, his crucifixion becomes a sudden revelation of who he really is, mirroring the opening of the gospel. He who proclaimed the kingdom (1.15) is identified as king (15.26). The Messiah of 1.1 who is anointed by the Spirit at his baptism is mockingly called this by the religious leaders (15.23). As the heavens were ‘torn’ (unique to Mark) to reveal the heavenly voice, so the curtain is torn (15.38) to reveal the emptiness of the Holy Place. And just as the voice from heaven (1.11) proclaimed Jesus as God’s beloved Son, so a voice from earth (15.39) recognises this Son of God. The end catches everyone by surprise—even perhaps Mark himself!

So if you have the chance to walk a labyrinth, do take the opportunity. It might teach you more about discipleship and the gospel than you first expect.

(I ought to credit my wife Maggie for the pictures of the church building and the labyrinth. They were much better than the ones I took!)

3 thoughts on “Life as labyrinth”