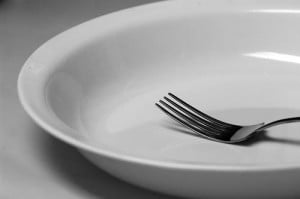 Since we are now in Lent, it might be a good time to review the spiritual habit of fasting. Jesus clearly expected his followers to fast after he had gone, so it is odd that this is not a widespread habit amongst all Christians. To answer this, we need to ask some background questions. How often did the first Jesus-followers fast? Was it an occasional thing, focused on specific events or causes? Or was it something more habitual and regular, an integral part of their devotional life? And what was its significance?

Here we have the same cluster of concerns—of righteousness, prayer, almsgiving, and fasting. And, once again, fasting is assumed to be a regular, habitual part of the devotional life, not something reserved for special occasions. This also fits with the question that is asked of Jesus and his disciples:

How is it that John’s disciples and the disciples of the Pharisees are fasting, but yours are not? (Mark 2.18).

The TNIV has translated this in a way suggesting this was a continual practice—and for good reason. In the parallel in Luke 5.33, the question appears to be on the lips of Jesus’ critics who state:

John’s disciples often [Gk: pukna, frequently] fast and pray, and so do the disciples of the Pharisees, but yours go on eating and drinking.

Matthew appears to be caught between Mark and Luke. Whilst most manuscripts have at Matt 9.14 John’s disciples asking the question ‘How is it that we and the Pharisees fast…?’, a minority tradition has added the word ‘often’ [Gk polla], probably in an attempt to harmonise Matthew with Luke.

So, this Lent, is there any reason why we should not all adopt this ancient practice of intermittent, twice-weekly fasting, as we look forward not only to the breaking in of the kingdom through Jesus’ cross and resurrection, but the completion of all things in his coming again?

4 thoughts on “How often should we fast?”