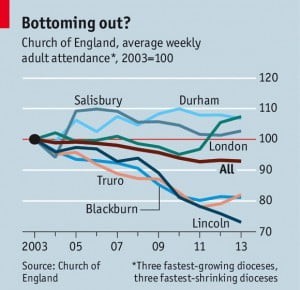 There is a fascinating new article Resurrection? published in The Economist, taking a look at decline, growth and change in the Church of England. It is interesting for a number of reasons:

The article starts off by noting the impact of immigrant Christianity as well as the changing face of parts of the C of E:

TO SEE the future of Christianity in Britain, go on a Sunday morning to an old Welsh Congregational chapel off the Pentonville Road in Islington. The building has been bought by a Pentecostal Ethiopian church; the congregation raises its hands in a show of unEnglish ecstasy to praise God in Amharic. A few hours later, something unexpected happens. A congregation of mainly white members of the Church of England start their service. This group, known as King’s Cross Church, or KXC, has grown from a handful in 2010 to 500 now.

It then looks honestly at the figures demonstrating the decline in both attendance at and influence of the C of E—though also spots the signs of hope and change.

Hints of revival in parts of the Church of England point to broader changes. Traditionally, the established church has had an obligation to serve everyone who lives in a parish. Its churches have been the centrepiece for local and national events. But many Anglican churches that are growing, as in King’s Cross, are “network” churches. They meet in pubs and offices outside the parish system. Most are evangelical, emphasising a personal faith based on conversion rather than a cultural affiliation to a denomination. … Nick Spencer of Theos, a religious think tank, says the Church of England is switching from a broad-based organisation, characterised by affiliation more than commitment, to a smaller grouping of more committed worshippers.

In other words, current activity which is leading to growth often represents a significant change in the traditional ethos of the C of E, both in terms of its theological outlook, its pattern of organisation and its relation to surrounding culture. This isn’t going to answer all the questions for all parts of the church; as is often noted, the ‘network’ pattern only really works in urban areas where people are free to choose church affiliation. It doesn’t look like a model which has yet had much impact in the rural context. But given the high proportion of the population who live in urban areas, these changes are enough to have had an impact in areas like London, and make significant contribution to London becoming one of the top three growing dioceses (see diagram).

As I have explored a number of times previously in discussing issues of church growth, it is these changes which focus attention on the very different perspectives and priorities in different parts of the Church at the moment. The article soon turns to focus on these.

“English society and the Church of England have gradually drifted apart in terms of values,” says Linda Woodhead, professor of the sociology of religion at Lancaster University. “This was true over issues like remarriage and the ordination of women, and it’s true of same-sex marriage.” Evangelicals say the church is right not to be swayed by changing social mores. They emphasise being counter-cultural and point out that many churches which are growing run against the liberal flow. “What is dying in England is not Christianity but nominal Anglicanism,” says David Goodhew of Durham University, author of “Church Growth in Britain”. The share of evangelicals in the Church of England rose from 26% to 34% between 1989 and 2005, says Peter Brierley, a church demographer, and could now be nearly 50%.

There is no space in such a comprehensive overview to explore questions like ‘What does it mean to be evangelical?’ which might be the next question to ask for those on the inside—not least because this article is seeking to inform outsiders as much as anything.

The writer of the piece (which is, like I think many Economist articles, unattributed) notes that the evangelical tradition is not the only one experiencing growth—cathedral attendance, which grew 35% in the ten years to 2012, is the most striking example. It is also sobering for anyone concerning with church growth or mission—or even the effectiveness of the Church’s ministry—to note the differences between the growing and shrinking dioceses. From 8% growth to 25% decline is a wide variation, and it cannot all be accounted for by differences in demographics—so the question is whether there are differences in leadership and strategy. (Interesting to note that things appear to have changed in Blackburn at around the time a new bishop was appointed.)

On the other side, the writer notes the unusual number of evangelicals in senior positions in the church, including 4 out of the 5 most senior bishoprics, and the influence of HTB in London and beyond.

They are conservative on issues like gay marriage, prompting accusations by liberals of bigotry. To be fair, there is not much sign of bigotry at King’s Cross Church’s weekly drop-in for prostitutes, nor its programme to keep kids on rough housing estates away from gangs. Many evangelicals want to restore the tradition of conservative social engagement set by William Wilberforce. They sigh at their characterisation as hateful homophobes. “Everyone thinks they know what the church is against,” says Pete Hughes, the church’s youthful pastor. “We want to be known for the things we are for: proclaiming the love of God and showing it in our actions.”

This is a really interesting observation, as it highlights the social involvement which is often the hallmark of growing evangelical churches, and which confounds a simplistic characterisation of evangelicals as socially conservative.

Perhaps the prize for the best quotation must to go this one from Alan Wilson:

“What about the people who would rather stick their head in a food mixer than become an evangelical?” asks Alan Wilson, the bishop of Buckingham, who openly supports gay marriage. He worries that the increasing number of people who affiliate only loosely or not at all with the Church of England will be alienated. Many do not hold liberal Christian beliefs, let alone evangelical ones.

I will leave it to the reader to decide the extent to which this comment is a reflection of the perspective of Alan himself (!). But it raises important issues about whether people come to faith by means of the culture of the church moving to the culture of society around it, or whether this new kind of church affiliation is served more effectively by the church remaining distinctive.

From where I sit, this article appears to describe accurately many of the changes in the Church. Alongside some sobering realities, it does points to reasons for hope. It suggests that the one thing we can be certain of is that the Church is changing, as is its relation with culture, and the encouraging change is mostly in one major direction.

You can read a certain number of pieces in The Economist for free, but you might need to register to read three articles a week—or you might be tempted to subscribe. Either which way, the full article is worth the effort.

31 thoughts on “Change (and growth?) for the Church of England”