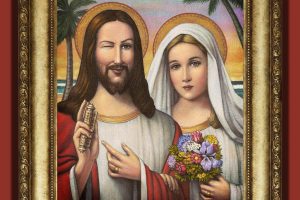 In 2012, a papyrus fragment with Coptic text on it hit the headlines, primarily because it appeared to include the phrase ‘Jesus said to them: “My wife…”‘. It attracted more attention than it might otherwise have done because it was endorsed by Karen King, Hollis Professor of Divinity at Harvard Divinity School. But in something like the biblical studies equivalent of an episode of Mission Impossible, it was fairly quickly proved to be a fake; although the papyrus itself was found to be mediaeval by radio carbon dating, it was shown that the text itself was a very poorly written copy from a facsimile publication of the Gospel of Thomas.

The reason this is hitting the blogosphere headlines again is because of a remarkable piece of investigative journalism published on Wednesday by Ariel Sabar, one of the journalists originally involved in 2012. The unanswered question in the whole episode was always who was the original owner of the fragment; when it was first offered to Karen King, it was on condition that the ownership and origin was kept secret. (Note to any professors reading: if someone offers you a unique and paradigm-shifting discovery on such terms, then you should smell a rat.) But the story Sabar has unearthed about Walter Fritz, the person he discovered was the owner, is as bizarre, salacious and dramatic as any Dan Brown novel. I won’t spoil it by giving the details; when you have a coffee break, it is worth reading the whole article. As a result of Sabar’s findings, Karen King has reluctantly (and probably too late to save her reputation) conceded that the manuscript is a fake.

In my previous post on this, I traced the process by which biblical studies experts in different places shared information, in large part on social media and blogs, to collaborate on demonstrating the papyrus was a forgery. One of the surprising heroes of the story turned out to be Christian Askeland, a textual critic who contributes to the Evangelical Textual Criticism blog. Textual criticism is the discipline of comparing and analysing the different manuscripts that we have from the Old and (mostly) New Testament, and I think it is fair to say that textual critics are considered the ‘back room boys’ of biblical studies.

The whole episode highlights some significant issues in two areas—the way aspects of our culture shape our perception of when things are true or not, and the often fraught interface between sexuality and religious belief.

On the first, there are a number of factors interplaying with one another.

The motivation of those claiming to make sensational finds is often a factor. Despite our living in a post-Christendom culture, Christian belief is so deeply embedded in our fabric, history and built environment that the traditional elements of Christian orthodoxy are still seen as fair targets to have a pop at in iconoclastic fashion, even half a century on from the Honest to God debate.

Financial reward is often one of those motivations. The authors who first made the ‘Jesus bloodline‘ theory popular did so in order to make money, and they were so peeved that Dan Brown made more money than them, they went to the trouble of suing him. The impact of free-market economics to the sale of antiquities has been a real disaster for archaeology; sites which might be valuable are more likely than ever to be looted for the sake of gain, and every few years we are set to have claims like those made about the ‘Jesus family tomb‘ where artefacts disappear and scholars are adopted, against their will, as supporters of wacky theories which then become publishing sensations.

Sensiationalist popular media are also tangled up in this. I don’t know about you, but I have never read a headline: ‘Shock discovery: the New Testament and the Church’s teaching turn out to be pretty reliable’. The market for news will always prioritise conflict over harmony, bad news over good, and the undermining of the (perceived) status quo over its confirmation. This has a distorting effect on how we perceive the world. You are much more likely to see a ‘Jesus and sex’ headline—and in the case of the Daily Mail Online, this will be surrounded by the latest celebrities in bikinis.

The ease of information exchange afforded by the internet is often a problem, particularly in the echo chamber of social media. But in this case the communication meant very speedy collaboration, and a comprehensive case of forgery was the result.

Theological commitment is often the unmentioned factor in all of these—and here I am going to be a little controversial. I don’t think that it is a coincidence that most of the main contributors to the discussion where either evangelical or what might be described as ‘orthodox’ in relation to belief in the reliability of the New Testament. It has been speculated that Karen King was picked out by Walter Fritz as a likely target because of her interest in iconoclastic, radical feminist approaches to the New Testament. In these debates, having a commitment to objectivity of truth makes a significant difference. 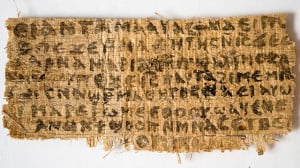 On the question of sexuality and Christian belief, I will repeat what I said before about Jesus and marriage, but with an addendum.

Was Jesus married to Mary Magdelene, or any other person? The short answer is: no. The slightly longer answer is: there is absolutely no reliable evidence that this was the case, and if Jesus was married, then we would see at least some indication of that in the New Testament documents—just as we know that Paul was not married, and Peter was, from a throw-away comment about the rights of an apostle (1 Cor 9.5). More to the point, there is some awkwardness in Jesus not being married. It was not unknown, but normally taking a wife and having children would be expected of a rabbi, and Jesus was at least unusual in not being married. It is one of several awkward things that, had the early ‘church’ (i.e. the Jesus movement) been making up stories about Jesus, they would have ironed this out, along with other embarrassing awkwardnesses:

But this whole issue has heightened significance in the context of our current debates. In the past, various people have complained that the Church has made marriage too much of a norm for fulfilled human existence. The introduction of same-sex marriage in many Western contexts has, potentially, extended that norm into all relationships. To be single (and/or celibate) in our society is widely seen as odd and exceptional—despite the quite large numbers of people for whom this is true. In our culture’s narrative, it is consistently claimed that you cannot live a fulfilled live without sexual expression; in his debate with Robert Gagnon, Dan Via claims precisely this about followers of Jesus. Jesus offered ‘life in all its fulness’ (John 10.10), and (says Via) we cannot conceive of this without sexual expression, and so it must be the intention of Jesus that we all enjoy sex.

The singleness of Jesus stands as a stark contradiction to this assumption. It is a contradiction that the Church itself has often found it difficult to come to terms with. But it is a contradiction which people like Walter Fritz (who, by no coincidence, was a produced of pornography) find impossible to accept in our sexualised culture.

4 thoughts on “Was Jesus married?”