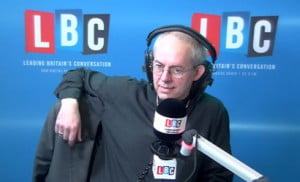 Last week the Archbishop of Canterbury, Justin Welby, conducted a radio phone-in on LBC Radio. Gillan Scott, over at God and Politics, characterised it as ‘a breath of fresh air’:

Spending an hour answering questions he covered plenty of ground and it was refreshing to hear him talking freely on a range of subjects firsthand including women bishops, welfare reform, the morality of fuel costs, foodbanks and a Christian attitudes to the environment without his words being reduced to the usual media soundbites. It was very easy to get a taste of his personality, the way that his faith has moulded him and why he is the right person to be the Archbishop of Canterbury at this time. His mixture of honesty, pragmatism and theology were thoroughly engaging, profound and at times entertaining.

But of course, inevitably the subject of same-sex marriage came up, and much of the media reporting focussed on this. His comments were given short shrift in a couple of different directions. Here are two representative samples, this first from the Huffington Post:

The “breaking story” in Anglican news circles is a radio interview with Archbishop of Canterbury Justin Welby tying the persecution of African Christians to the fuller inclusion of LGBT people by “the western church.”…Where is the lament from the ABofC for LGBT youth who choose suicide over bullying? For those who live in fear of arrest or assault because of their sexual orientation or gender identity? Or for those who are dying the slow death of internalized homophobia not only condoned by but contributed to by “the church?”

This second is from Kelvin Holdsworth, Provost of St Mary’s Cathedral, Glasgow:

The Archbishop of Canterbury’s statements yesterday in a radio phone-in, which seemed to imply that opening marriage to same-sex couples would lead to murder in Africa, take us into a very murky ethical place….Generally speaking, I thought it was a poor radio performance…The particularly offensive thing which he has said is to suggest that there should be no movement on opening marriage to same-sex couples in the church because that could lead to Anglicans being murdered in Africa. I find the ethics of this very straightforward… The Archbishop of Canterbury seems to have been suggesting that our policies should be dictated by murderers.

How might we respond to the first kind of comment? Well, here’s a suggestion: How about listening to what Justin actually said?

A gay christian listening to you though may have heard the message that he or she can’t marry their partner in their church because of the conniptions it would give to some African, dare we say less enlightened people, in Africa.

Well I don’t think we dare say less enlightened actually. I think that’s a sort of neo-colonial approach and it’s one I really object to. I think it’s not about them having conniptions, getting irate, that’s nothing to do with it. It’s about the fact that I’ve stood by a graveside in Africa of a group of Christians who’d been attacked because of something that had happened far far away in America, and they were attacked by other people – because of that a lot of them had been killed. I was in the South Sudan a few weeks ago and the church leaders there were saying please don’t change what you’re doing, because then we couldn’t accept your help and we need your help desperately. We have to listen carefully to that, we also have to listen incredibly carefully to gay people here who want to get married and also to recognise that any homophobic behaviour here causes enormous suffering, particularly to gay teenagers, something I’m particularly conscious of at the moment. And we have to listen to that very carefully and work out what we do.

Can you imagine a day when two people of the same-sex will be married in an Anglican church here?

I don’t know. Personally, I have a real, I look at the Scriptures, I look at the teaching of the church, I listen to Christians around the world and I have real hesitations about that. I’m incredibly uncomfortable saying that because I really don’t want to say no to people who love each other, but you have to have a sense of following what the teaching of the church is, you can’t just make sudden changes.

Where is the lament for victims of homophobic bullying? Right there, in what Justin actually said. And this was not the only point at which he said it. It is really disappointing when certain ‘revisionists’ bandy about comments borne of simple ignorance, and (sadly) it suggests a real reluctance to even listen to what has been said. And it is also disappointing when bishops on Facebook disseminate these views without scrutinising them—though fortunately some proper conversation did follow the posting.

How might we respond to the second point of view, which draws a simple, straight, consequentialist line from one thing to another, assuming this is what Justin was saying? Again, the first thing is to note Justin’s comment above: it is Scripture (first) and the consistent teaching of the church down the ages which has weight, not just what he witnessed in Africa. Andrew Goddard has just posted an excellent piece on Fulcrum exploring the ethical issues. In relation to the kind of comment Kelvin makes above, he notes:

Some seem to have heard Archbishop Justin offering a crude form of consequentialism, the view that whether an action is right or wrong is determined solely by whether its consequences are good or bad: a consequence of the Church of England accepting gay marriage is that Christians in Africa will be killed, this is clearly wrong, therefore I am opposed to the Church of England accepting gay marriage. This has happened due to a mix of poor reporting of the interview and to the sad fact that consequentialism is often people’s default line of moral reasoning and so assumed to be the form of moral argument being presented.

After looking carefully at both context and content of Justin’s comments, he observes:

This was, in short, an appeal to neighbour-love that politely suggested the questioner needed a bigger vision of what this fundamental Christian command required…

In other words, Archbishop Justin is very far from offering a consequentialist argument that the cruel, wholly unjustifiable infliction of suffering on African Christians should determine and fix the church’s stance.  Rather, in the face of a call for a sudden change in church practice, he appealed to the classic Anglican process of patient corporate, reasoned ecclesial reflection which listens to a range of human experience and studies tradition and Scripture, with Scripture as definitive.

Andrew then explores the complex issues around the cost of making the right choices, given that all options have consequences for different parties—and there are challenges on all sides of the discussion.

Those pressing for change therefore need seriously to attend to these complex realities and questions even though they are not as obvious and pressing for most English Anglicans in their parishes as they are for bishops whose ministry connects them with the wider church.  Those of us upholding the current teaching and discipline similarly have seriously to address the complex realities and questions we face here and now with the introduction of same-sex marriage and ask those in other parts of the Communion to understand our context as we seek to understand theirs.

If this happens, then the ‘facilitated conversations’ might have some purpose and be fruitful. But only as long as the kind of responses we saw above are well and truly set aside.

And, by the way, could you please pray for Justin Welby and his ministry? It cannot be either pleasant or easy knowing that every comment you make on this question is going to be misreported and misinterpreted in a thousand different directions.

I think there is an interesting (and surprising) reflection from Andrew Brown on the question. He includes this comment:

Christians are called on to do what is right, and to trust that God will bring good out of it even if evil immediately follows. Failing to do what you believe is right is, in some lights, a kind of blasphemy.

Welby does not, in fact, believe in gay marriage, so he’s off that particular hook. And he has already said enough in favour of gay people to disgust the Ugandan and Nigerian churches. I don’t think you can accuse him of cowardice on this issue, even if he’s wrong.

26 thoughts on “What did Justin Welby say about gays and violence in Africa?”