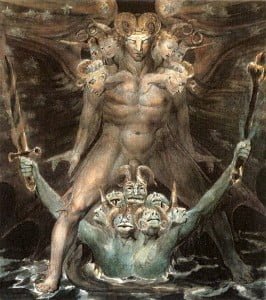 Both popular and academic readings of Revelation still suffer from a need to find some future supposed reference to various features of the text. This is despite considerable evidence that the text would have made good sense to its first-century readers, and that many would have been able to understand it as a depiction of their own world, albeit in a highly symbolic form.

The development of this ‘futurist’ reading strategy arose from ignorance of the meaning of the text quite quickly into the second century. So (for example) we find Irenaeus (130–202) speculating about the meaning of 666 (Against Heresies 5), discussing textual variants that include 616, but knowing the correct reading from people he knows who knew John’s teaching. And yet he cannot decipher the reference, and speculates it might be ‘Teitan’ or ‘Lateinus.’

With the rise of an interest in the classical world in the late 18th and 19th centuries came the explosion of interest in archaeology and papyrology, which meant that we now know much more about the ancient world than previous generations did, even ones that were quite close in time. This went hand in hand with the growth of historical critical ways of reading the New Testament, and with it the conviction that our interpretation of the NT must start and be shaped by the historical meaning of the texts, that is, what the text meant to the writer and first readers. For most texts, this has led to the displacement of allegorical or speculative readings—seen as just that: speculative—with its historical meaning.

But the one text where this has not happened is the Book of Revelation. Even though futurist readings came about to fill the vacuum left by the absence of historical understanding, Western commentators often simply add back the historical meaning, but retain the futurist reading, so the text now means or refers to two different sets of things. Robert Mounce (who wrote the Eerdmans NIC commentary) explains it like this:

The predictions of John, while expressed in terms reflecting his own culture, will find their final and complete fulfillment in the last days of history. Although John saw the Roman Empire as the great beast that threatened the extinction of the church, there will be in the last days an eschatological beast who will sustain the same relationship with the church of the great tribulation. It is this eschatological beast, portrayed in type by Rome, that the Apocalypse describes…

It seems quite acceptable to believe in the dual fulfilment of biblical prophecy whilst accepting that the Old Testament prophets did not necessarily have the second (main) fulfilment in mind, even though they may have been “trying to find out the time and circumstances to which the Spirit of Christ in them was pointing.” However the New Testament writers, under inspiration of the Holy Spirit, recognised the second fulfilment. The same thing applies to New Testament prophecies. The writers made predictions which sometimes referred to 1st century events and did not necessarily have a second major fulfilment in mind. Similarly Jesus made predictions which his hearers may have applied only to 1st century events. But it is clear that some of these predictions do have a second major fulfilment which is still future. We have to be careful, though, in seeking a correct understanding of these predictions.

There is a fascinating move going on here. Because the OT prophetic texts have a ‘second fulfilment’ in the person of Jesus, then NT ‘prophetic’ texts will also have a ‘second fulfilment’ in the timetable of ‘last days’ events. Note that Mounce is not here talking of the kind of partially-realised eschatology we find in Paul, for example in Romans 8, where what we have now is the ‘first fruits’ of what we will experience when Jesus returns. He is talking about historical events referred to (such as the fall of the temple in Jerusalem in AD 70) having corresponding historical events in a ‘last days’ calendar. He does not appear to notice that is actually the opposite of what is happening in relation to the OT. The fact that there is a ‘second fulfilment’ in Jesus is because Jesus is the ultimate expression of God and his purposes, and all his promises find their ‘yes’ in him. To say that there is a further series of events that are needed to fulfil the NT is to say that not all God’s promises find their ‘yes’ in Jesus. Futurist eschatological schemes actually undermine the centrality of Jesus in the NT, because they focus the fulfilment of God’s promises in a scheme, rather than in his person.

But more significantly (in relation to Revelation) there is no indication whatever in the text itself that the symbolic action has this kind of ‘double reference.’ There is repeated emphasis on the fact that this is all to happen ‘soon’. The primary genre of the book is of a letter; John is addressing people he knows who live in a particular historical and cultural context, and since the work of Ramsay and Hemer on the seven ‘messages’ in chapters two and three, we have appreciated that Revelation is firmly embedded in its historical and cultural context. And the function of the messages themselves is to root the action in the world of first-century Asia; the visions that follow are not detached from the world they live in, but describe and speak to their world very directly.

At the end of the book, there is a key phrase which reinforces all this:

What does this verse mean? It cannot be read in isolation from the parallel verse in Daniel 12.4 and 9–10:

What does this mean? In Daniel, the stories are set in the sixth century BC, with Daniel in exile in Babylon. But most commentators agree that the stories refer to the Antiochene crisis in 167 BC, when Antiochus IV Epiphanes sacrificed unclean animals in the temple, and event which led to the Maccabean revolt described in 1 and 2 Maccabees. Some scholars would see this as vaticimium ex eventu, a literary device where Daniel appears to foresee what is to come, though the text is actually written in the second century. Others would see it as an ‘authentic’ predictive text, where the second-century BC future was revealed to sixth-century BC Daniel. But either way, the point is that the events being referred to are many years after the setting of the story being told. Hence the words of the vision must be ‘sealed’ (in this case for around 400 years), until they become relevant to the readers.

What does Rev 22.10 then say? The exact opposite. The words of John’s vision report must not be sealed; the events being referred to are not many years after the setting in which John is writing. The beast of Rev 13 is not some future, eschatological figure who will come many centuries hence, but (in the form of Roman Imperial power) is already demonstrating his strength.

Of course, this is not to say that Revelation lacks relevance for us. In fact, I believe that our failure to read and engage with this text has significantly weakened the Western church in its task of engaging with current, imperialistic, ideological forces in our world. But in the first instance we need to read this they way we read other NT letters—by understanding it in its context, and then looking for corresponding parallels in our own world. In fact, Revelation invites us to do this, but offering a distinction between the local significance of some of the things it symbolises, and cosmic significance of others.

So in Revelation 12.9, the dragon has attached to it the cosmic and primeval descriptors of ‘that ancient serpent called the devil, or Satan’. By contrast, the depictions of the beast from the sea and the beast from the land appear to have very specific descriptors, which has led most contemporary commentators to see them as respectively symbolising Roman Imperial power (coming to Asia across the Aegean) and the local structures of power through which Rome exercised control.

Just as we are challenged by e.g. 1 Corinthians 8–10 to ask, where are the issues in our churches which separate rich from poor and lead to exclusion, so in Revelation 12 we are challenged to ask, where do we find systems of power and ideology which trampled the saints, are obsessed with appearance and image, seek to gain financial control, and elevate themselves to the place that only God deserves?

What we are not asked to do is to find the second, futurist,’fulfilment’ of this text—because John did not intend one, and his readers did not need one.

(For more detail on this, see my Grove booklet How to Read the Book of Revelation.)

6 thoughts on “Was Revelation written about the distant future?”