I have a confession: sometimes I quite like some of the things written in the Daily Mail. Occasionally their articles bring a refreshing perspective, defending something of value from a ‘traditional’ viewpoint against what at times feels like the onslaught of political correctness. (You can easily find out whether the paper would like you, and whether you should read it.)

But not this week. The article about Ed Miliband’s father, Ralph, a Marxist academic, crossing all sorts of lines and had all sorts of problems. 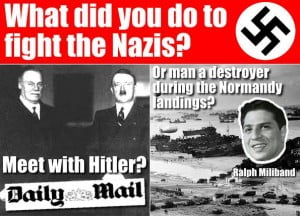 Firstly, it was inaccurate. The only substantial piece of evidence to support the headline was a quotation from Ralph’s diary…when he was 17. What 17-year-old doesn’t hate everything at some point? Those who knew him say he was an engaging if quirky person, and that, as a Marxist, he opposed what was happening in the Stalinist Soviet Union. But to believe in socialism isn’t to hate Britain—it is merely to hate the Daily Mail’s vision of Britain. Perhaps it means hating the idea that people with money and control of the print media should determine what people believe and who they should vote for.

Secondly, it was hypocritical. Whilst ‘Britain-hating’ Miliband Senior was serving in the Royal Navy, the Daily Mail was campaigning against German Jews, and the paper’s owner was writing to Hitler to congratulated him on his annexation of Czechoslovakia and urge him to capitalise on the “triumph” with a march into Romania. His great-grandson still owns the paper.

But the hypocrisy extends to the present day. According to the Mail:

Put to one side that Mr Miliband’s close involvement with degenerates such as Damian McBride gives him scant right to claim the moral high ground on anything.

And guess who serialised the writings of this ‘degenerate’? You guessed it: the Mail!

And does anyone else find it more than a little grating that, when reading an article on the sexualisation of society through online pornography, the page is surrounded by pictures of celebrities in bikinis?

Thirdly, it was corrupting. Nick Baines laments the way that much political rhetoric corrupts language, but I think there is something more serious going on here: the corruption of democacy. Winston Churchill once commented:

The best argument against democracy is a five-minute conversation with the average voter.

The reason for this is that democracy relies on people considering the issues, critically evaluating the alternatives, and voting accordingly. Often this doesn’t happen—and it is much less likely to happen if people are reading the Daily Mail, or other papers with an explicit agenda to support a particular party or political line. Nick Palmer, former Labour MP for Broxtowe, commented to me:

I wish there was a newspaper that didn’t see it as their main objective to campaign for anything, and would just try to report the facts objectively.

That is why I love reading The Week. In each edition, it explores a Briefing on a key issue from all sides, and invites you to make up your mind.

But here’s an idea. Television broadcasters are obliged by law to be impartial, and to give equal space to representative differing viewpoints, and get into trouble when they don’t. Why isn’t the same true for print broadcasters? If anything, it is much more important for newspapers than TV, since people are much more tribal about the paper they read.

Imagine if all newspaper reporting was politically balanced? It could help to make politics less conflictual, less rhetorical, more focussed on issues and less on impressions. Politicians would have an incentive to win the argument, not just the war of words.

Despite Ed Milibands’s protests to the contrary, this episode actually strengthens the case for tighter regulation. And a rule about impartiality could be just the regulation we need.

2 thoughts on “The problem with the Daily Mail”