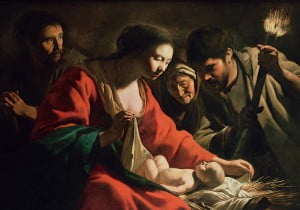 I really don’t know what goes through the mind of people who argue that they know much better than the gospel writers what Christianity is all about. Do they think the evangelists were stupid, ignorant, or just a little bit slow on the uptake—or perhaps all three? And how did Christian tradition make such egregious errors until this enlightened modern mind came along to set us all straight?

Such were my thoughts when reading Giles Fraser’s latest piece, pointing out how the virgin birth doesn’t really fit with Christian belief.

The idea that Jesus was born of “pure virgin” could well have been a reaction to insults [that Jesus was illegitimate]. That Mary’s womb was “spotless” was perhaps a cover story designed by Jesus’s supporters to explain a more God-like nature for his arrival.

And Fraser goes further to suggest that the idea of Virgin Birth is particularly inappropriate for a religion which rejects the distinction between purity and impurity.

For what separates Christianity from other religious traditions is that – the birth narratives aside – Christianity deliberately refuses the familiar distinction between the pure and the impure. Jesus was born in a cowshed; from lepers to prostitutes, he deliberately courted the ritually unclean; and he spent most of his ministry tearing down barriers between pure and impure – not least, those of the Temple – that separated the “ungodly” from God himself.

In Christianity, purity is abolished.

I suspect that that would have been news to both Jesus, who instructed people to go and make offering to the priest to demonstrate their purity after healing (Mark 1.44), and his Jewish disciples who continue to attend Temple worship, presumably including its cleansing rituals, even after Jesus’ death and resurrection and the sending of the Spirit (Acts 2.46). It would have been news to Paul, who expected a decisive change in the lifestyles of believers (‘such were some of you…’ 1 Cor 6.11) not least because we ourselves are temples of the Holy Spirit. It would be news to the Jewish Peter, who appeared to think that the Levitical command to ‘be holy, as I am holy’ (Lev 20.26) now applies to all Jesus’ followers, whether Jew or Gentile (1 Peter 1.16).

It should also be news to any Anglican, who weekly prays (as part of the Communion service) the Collect for Purity, in which we ask God to ‘cleanse the thoughts of our hearts by the inspiration of your Holy Spirit’. In fact, it ought to be a surprise to any of us who read the whole Bible, since it draws such a strong distinction between the rather oppressive Old Testament concern with purity and holiness and a much more enlightened and (frankly) not very Jewish Jesus who thankfully does away with all that. This is not only historically implausible, but it is in danger of putting an anti-semitic perspective at the heart of our theology.

In debates on social media, someone suggested that what Fraser intended to say was that Christianity abolished the need for purity as a pre-requisite for encounter with God. If so, then I suppose this should be a warning to us of the dangers of shooting our theology from the hip in such a way as to catch headlines. But even then we need to reckon with Jesus’ own preaching; the first response to the good news of the kingdom appears to be that we should ‘repent’.

The irony of all this is that Fraser’s position doesn’t make much sense of the New Testament texts either. The one point where I think Fraser is right in suggesting that some Christian traditions have made too much of Mary’s virginity. But it is striking that, by contrast, the gospels don’t make that much of it themselves—a distinction Fraser fails to make as he lumps the NT accounts in with the subsequent tradition. The emphasis in Luke’s account is not Mary’s purity so much as her lack of qualification; this appears to be a surprising choice. And the work of the Spirit in bringing new birth is interpreted symbolically as a foreshadowing of the birth of the new community of faith at Pentecost (compare the language of Luke 1.35 and Acts 1.8). Matthew needs to make a rather forced connection between the Virgin Birth and the ‘prophetic’ text of Is 7.14—and the best explanation of this is that he had some actual facts to make sense of. Contrary to Fraser’s lazy assumption, there is in fact quite a developed scholarly debate on whether the language of Isaiah is fairly translated by Matthew in his Greek text, and it is striking that Matthew makes very little of the miraculous nature of the birth itself. Elsewhere in the NT, it is often noted that Paul does not list this in his set of basic beliefs (1 Cor 15), though he does talk of Jesus as ‘born of a woman’ (Gal 4.4).

Yet there are tell-tale signs that Jesus’ birth was unusual—including the text in John that Fraser cites. In John 8.41 those Jews opposed to Jesus comment ‘We were not born of fornication; we have one Father: God.’ The idea that they could have made use of this as an insult to Jesus—to which John gives no theological weight whatever—is good evidence for the reliability of the Virgin Birth tradition. In fact, Luke demonstrates awareness that this actually makes his account slightly awkward; his tracing of Jesus’ lineage back through Joseph depends on the supposition that Joseph was in fact Jesus’ father, which is only supposition (Luke 3.23). When exploring whether something in the NT might be historical or not, one thing that scholars look for is ‘multiple attestation’, asking whether we have independent accounts of an event, rather than accounts where one gospel writer has copied from another. Matthew’s account of the birth of Jesus is told from a male perspective; the men do all the talking and are the key players on whom the plot turns. But Luke writes from a female perspective; we move from the palaces to the private rooms, and it is the women who are key. It is not surprising, then, that Matthew’s language about the supernatural nature of Mary’s conception (‘that which is conceived in her is of the Holy Spirit’ Matt 1.20) has no connection with Luke’s language (‘The Holy Spirit will come upon you, and the power of the Most High will overshadow you’ Luke 1.35). But this in turn suggests that there are two independent traditions confirming the same thing. If you add the hints in John and Paul mentioned above, then you have the highest level of attention to historicity.

We might forgive Fraser’s casual error in suggesting that Jesus ‘was born in a cowshed’, which again makes theology out of mistaken tradition, without distinguishing this from the actual gospel accounts. It is harder to forgive the historical error that the notion of the virgin birth was ‘a reaction to’ insults from people like Celsus. As Dwight Longenecker points out, the Protoevangelium of James was most likely written at least 30 years before Celsus’s attack on Christian belief, and it already has the notion of the virgin birth (along with a number of traditions about Mary that found their way into Catholic dogma) firmly embedded in it.

Fraser is on equally dodgy ground in his assertion that ‘Jesus didn’t much care for the whole nuclear family thing.’ Putting the anachronism aside of expecting Jesus to say anything at all about the ‘nuclear family’, it is worth reflecting a little more on the question of faith and family loyalty. Although Jesus makes kingdom loyalties more fundamental than family ties, that was a relative and not absolute contrast. He still gives his mother to John at the cross; and Paul is able to state baldly that ‘If anyone doesn’t take care of his own relatives, especially his immediate family, he has denied the Christian faith and is worse than an unbeliever’ (1 Tim 5.8). As Rodney Stark has pointed out, it was the distinctive commitment to family relations which was a key part of the growth of Christianity in the early centuries—as a sharp contrast to pagan culture around it. Once again, the early Christian movement took values deeply rooted in its Jewish heritage into the wider world, which Fraser brushes aside with casual ignorance.

The foolishness of the kind of liberal re-writing of theology which Fraser offers us here was well captured by Richard Niebuhr: ‘A God without wrath brought men without sin into a Kingdom without judgment through the ministrations of a Christ without a Cross.’ It is not only foolish, it is also supremely intellectually arrogant. I wonder if Fraser really thinks that the church would have grown faster and more effective had they followed his advise—as that is what he claims:

Early Christians answered the likes of Celsus in the wrong way. When they charged Jesus with being illegitimate, they should simply have replied: “So what if he was?”

In fact, what separates Christianity from other religions is not the abolition of purity, but accessibility to purity made available not by our own effort or religious activity, but by the costly gift of God’s grace.

The wonder of Christmas is precisely that a holy God comes to us in Jesus in our unholiness, and, in an astonishing exchange, that he not only invites us into holiness, but enables that to happen by the continuing gift of his presence by the Spirit. The same Spirit that came upon Mary, overshadowing her with power from on high, can this Christmas overshadow us, till the holy Christ is born in us anew (Gal 4.16), enabling us to live transformed lives that are acceptable to our holy God (Romans 12.2).

(A shorter version of this was first published at Premier Christianity on 24th December 2015).

56 thoughts on “Faith, purity and the virgin birth”