Something has changed in the Church of England. It is a radical change, but one that has not attracted much comment. I was alerted to it when Martyn Snow was announced as the next Bishop of Leicester. A diocese with a long tradition of liberal leadership, most recently under Tim Stevens, has appointed someone with an evangelical outlook, and the youngest diocesan in the Church to boot. And this is not an isolated example.

Amongst the five senior diocesans, Canterbury, Durham, Winchester and York are clearly evangelical, and in London we have a traditional (rather than liberal) catholic. In the next tier we find Chester, Bristol, Birmingham, Coventry, Sheffield, Carlisle, Peterborough and Leeds, and then include at least Blackburn, Bath and Wells, Guildford, Southwell and Nottingham, Rochester and Europe, and you have a formidable representation of evangelicals in the House of Bishops—one without precedent in modern times.

It is important both to qualify and to clarify what this means. Bishops are famously reluctant to own theological ‘labels’, and for understandable reasons. They are, after all, there to function as a focus of unity around the Church’s teaching, not to serve as point-scoring for particular traditions or signs of shallow triumphalism. And the presence of so many evangelicals will not satisfy the extremes. Liberals worry about a threat to the ‘broad church’; conservatives will wonder why it remains so broad—apocryphally asking of consecrations, ‘Is that the point in the service where they remove your backbone?’

The reasons for this change are deep and historical, and we need to understand why we have got here in order to see where we are going.

Within the evangelical tradition itself, the reasons reach back at least 50 years. At the first National Evangelical Anglican Congress (NEAC) at Keele in 1967, a major question was whether evangelicals, still with a sense of being a beleaguered minority, should stay within the Church of England at all. Martyn Lloyd Jones of Westminster Chapel had said no—they should ‘come out from among her’ and form a pure, uncompromised, evangelical church. John Stott, of All Souls’ Langham Place, urged evangelicals to stay, engage, and effect change from within. Stott won the day—though his position then still does not convince everyone now. Evangelicals are not always good at compromise.

At the second NEAC in Nottingham in 1977, Anthony Thiselton (later Professor at the university there) urged a second kind of engagement by evangelicals—with scholarship, and in particular with the developing discipline of hermeneutics. He was opposed by my then-hero David Watson, who at one point in the Congress openly mocked him—but Thiselton won the argument (and I ended up doing a PhD in exactly this area).

This commitment to engage has borne remarkable fruit. In 2007, Gordon Kuhrt (who had been the first Director of the newly formed Ministry Division of Archbishops’ Council) analysed what was happening to theological traditions in ordination training and found something remarkable. 30 years previously, evangelicals accounted for around 30% of ordinands entering training. By the time of his writing, this had changed to 70%. This wasn’t because the numbers of evangelicals coming forward had increased, but because the numbers of catholics and liberals (to use the three broad categorisations) had dropped off. It is not difficult to understand that, all other things being equal, the tradition of ordinands in one age will become the tradition of the Church’s leadership in the next.

Following Thiselton’s urgings, evangelicals have also been active in engaging with theology. I was in the first cohort experimentally to move straight to doctoral study from ordination training, and many other evangelicals have done the same. As a result, there are evangelicals in every tradition of residential college, and (significantly) teaching on courses as well as in context-based training. Evangelicals no longer stick doggedly to parish ministry—their traditional remit—but are also now area deans and archdeacons and involved in sector ministries. The one area largely untouched is that of cathedral deans. The large number of evangelical bishops is just the episcopal tip of an ecclesiastical iceberg.

Within the Church itself, Mission-Shaped Church (which came to Synod when I was last a member in 2004) marked a watershed. It was now possible, credible and even desirable to talk about mission explicitly as an Anglican, in a way it wasn’t after Towards the Conversion of England (1945) nor even after the Decade of Evangelism. This explains why evangelical episcopal appointments are not the result of a conspiracy; Vacancy in See committees are asking for a credible commitment to mission, and evangelical candidates are giving plausible answers. 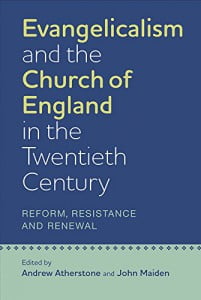 Is this situation likely to continue? To answer that, take a look at the youngest diocesans, since they will be around for some time to come, and are the most likely to occupy senior positions in the future. They are (in age order) Leicester, Southwell and Nottingham (both 48), Gloucester (53), Guildford (54), Europe (56), Coventry, Chichester, Chelmsford (all 57), Winchester, Ely, Leeds, Truro, Sheffield, St Albans and Manchester (all 58). Of these 15, 10 look evangelical, and another two ‘traditional’ catholic, and only three more liberal. And the high proportion of evangelical ordinands looks set to continue; a major route is through youth work, and 90% of youth workers are employed by evangelical churches. Any tradition diversifies as it expands, and debates will continue about who are ‘true’ evangelicals. As Andrew Atherstone and John Maiden point out in the excellent Evangelicalism and the Church of England in the Twentieth Century (Boydell Press, 2014) that debate was as lively in the earlier lean years as in these years of plenty.

Martyn Atkins, when General Secretary of the Methodist Conference, reflected on how we could go about Resourcing Renewal (Inspire, 2007). Renewal comes, he argued, when an institution rediscovers its ‘founding charisms’ and, paradoxically, this is what is needed to face an uncertain future. I wonder whether the presence of evangelicals, at every level of ministry, might aid this process for the C of E—that we recover what it means to be a reformed catholic church. This means not being reformed and catholic (and liberal), living in different silos, nor executing an evangelical ‘takeover’—but that our diversity is held together by means of a reflective biblical theology shaped by insights from previous generations (tradition) and informed by responsible intellectual engagement (reason).

Whatever its pros and cons, this new configuration of the Church is likely to be here for some time to come.

A revised version of this article was published in the Church Times on 19th February 2016.

35 thoughts on “Are evangelicals taking over the Church?”