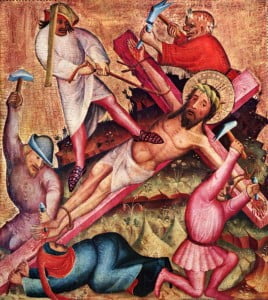 When considering the evidence for Jesus’ resurrection, we need to separate two issues. First, what are the historical facts that require an explanation? And, second, what is the best, most plausible, explanation for those facts?

What are the facts to consider in relation to the resurrection?

First, Jesus died on the cross, a victim of Roman execution as a common criminal. The Romans were very experienced at this, and knew how to check that someone was dead. If they had not died soon enough, then they broke the legs of the victim who would then suffocate, unable lift themselves up on their legs to take a breath. In John’s gospel, this is recording in some detail.


Now it was the day of Preparation, and the next day was to be a special Sabbath. Because the Jewish leaders did not want the bodies left on the crosses during the Sabbath, they asked Pilate to have the legs broken and the bodies taken down. The soldiers therefore came and broke the legs of the first man who had been crucified with Jesus, and then those of the other. But when they came to Jesus and found that he was already dead, they did not break his legs. Instead, one of the soldiers pierced Jesus’ side with a spear, bringing a sudden flow of blood and water. (John 19.31–34)

What is fascinating about this account is that the writer sees the water and blood as having symbolic significance; it proves that Jesus promises, of giving ‘living water’ to those who believe (John 4.10) and that ‘living water will come from his side’ (John 7.38). We now see this as medical evidence of Jesus’ death, as the red blood cells and serum have separated after the heart has stopped beating—which John has quite inadvertently recorded.

Secondly, Jesus was buried in the tomb of Joseph of Arimathea, a wealthy and influential member of the Sanhedrin, the ruling Jewish Council, who was also a secret follower of Jesus. This is attested in all four gospels, in slightly different ways (Matt 27.57, Mark 15.43, Luke 23.51, John 19.38). This would have been an odd thing to make up; if Joseph were invented, or Jesus not buried here, then it would have been an easy thing to refute. Given that the Council were hostile to the early Jesus movement, it would also be an unlikely invention.

Thirdly, on the Sunday morning the tomb was found to be empty. There are several striking things about this fact and the way that it is related in the gospel accounts.

First, the tomb was guarded by Jewish temple guards; in Matt 27.65 Pilate tells the Jews to post their own guard, and in Matt 28.11 the guards report back to the Jewish leaders. This was quite understandable; anyone who looked as though they might lead a rebellion against Roman rule could cause real trouble. Such a rebellion in 66–70 led to the destruction of the temple, and another in 136 led to the expulsion of all Jews from the land of Judea. Matt 28.11–15 recounts the bribing of the guard to say that Jesus’ disciples stole the body—but this is never subsequently brought up as an accusation, in NT or Jewish literature of the time. And if the disciples had gone to the wrong tomb, the Jewish leaders could simply have produced the body from the right tomb to end the movement.

Secondly, it is clear from the gospel accounts that, despite Jesus’ teaching, none of his followers expected to find anything other than his dead body in the tomb when they went to anoint it. This is not surprising; their expectation is that the dead would be raised at the end of the age (see John 11.24 for a typical expression of this), which would involve all of humanity. No-one expected an individual to be raised from the dead now. All the signs were that Jesus’ death meant the end of all their hopes (see Luke 24.19–21)

Thirdly, John’s account includes a curious note about the cloths that had been used to bind Jesus’ body in the customary way.

Then Simon Peter came along behind him and went straight into the tomb. He saw the strips of linen lying there, as well as the cloth that had been wrapped around Jesus’ head. The cloth was still lying in its place, separate from the linen. (John 20.6–7)

Not much is made of this, and it appears to be an allusion to the earlier account of Lazarus being brought back to life in John 11.44. But it is a sign of what had happened to the body; if it has been stolen, then there would be no grave clothes, or they would have been taken off and left together. The fact that the soudarion from Jesus’ head was separate from the othonion, the linen shroud for his body, meant something else must have happened. Each piece of material was still in the place that it would have been when wrapped around Jesus.

Fourthly, all the gospel accounts agree that women were the first eyewitnesses to the empty tomb, and that they reported this to the male disciples. In a culture where women’s testimony was not accepted in court, this would have been a silly thing to have made up—their word counted for nothing.

In recounting all this, it is striking that the four gospel accounts of the empty tomb are quite different, each with their own perspective. In fact, their reports diverge in their details more than at any other point in their recounting of Jesus’ life. Despite this, they all agree on the core details: that women went to the tomb early on the Sunday morning; that the stone had been rolled away and the guard gone; that the tomb was empty; and that various of Jesus’ followers believed that they met him, bodily alive again. This is entirely consonant with the gospels being independent accounts based on different eyewitnesses to these events. (Note, for example, the mention of ‘Peter’ in Mark 16.7; there is a strong case for reading Mark’s gospel as based on Peter’s own testimony.) And there is now an overwhelming consensus amongst scholars that all four gospels were written in the lifetime of eyewitnesses, and widely circulated amongst the early Christian communities.

Lastly, it is also striking that none of the gospel accounts actually record the resurrection—they simply record the fact of the empty tomb. A legendary fabrication of the event would surely do something else—as in fact the Gospel of Peter, an invented account written in around 125, does in some detail.

Fourthly, there was a long list of eyewitnesses who believed they had met the bodily, risen Jesus, which Paul recounts in 1 Cor 15.3–8. Paul notes that this was ‘handed to him’ as an early statement of belief, and it is most likely that he received it from Peter three years after his conversion (Gal 1.18). (Note that Paul’s experience of meeting Jesus was quite different; his was visionary, whereas the earlier witnesses all believed that Jesus was bodily, since he ate and drank with them.) Paul’s letter to the Corinthians was written in the early 50s, just 20 years after Jesus’ death, and as he notes, most of the eyewitnesses were still alive.

And the remarkable thing about these people is that, whatever they experienced, it transformed them from a small, dispirited and disillusioned group to being the start of an extraordinary movement that, within a few decades, had a following across the civilised world of its time. This group became sufficiently important that, by AD 49, they seem to have caused Claudius to expel a good number of Jews from Rome, the capital of the Empire.

This raises a wider question about the Jesus movement altogether: how do you explain the rise of this religious movement, following an otherwise unknown itinerant preacher from an obscure province on the edge of the Roman Empire? When you compare this with other religious movements, it is notable that Jesus lived a short life, never travelled far, never wrote anything, left a relatively small body of teaching, died young, was executed as a criminal, never held any political or military office, and never had a large following. No other religious or political movement had such unpromising and unlikely beginnings.

So those are the historical facts, which are well attested: Jesus died; he was buried; his tomb was found to be empty; and the small group of dispirited followers were transformed into the confident beginnings of a world-wide movement in a remarkably short time.

Alternative explanations either contradict well-established facts, or they cannot explain these phenomena. The only plausible explanation is that something quite extraordinary happened, and the notion that Jesus was raised back to life is the only one that fits these facts.

Here is Tom Wright on what difference the resurrection makes:

51 thoughts on “Evidence for the Resurrection”