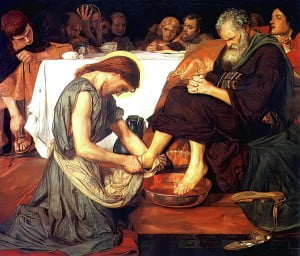 On Maundy Thursday, it is traditional to focus on the account of Jesus washing the disciples’ feet in John 13—and possibly to re-enact this within a service. But in rushing to the final example, we miss the most important lesson, which comes in the middle, rather than at the end, of the passage.

The passage itself is highly characteristic of John’s style, with references back and forwards to what has gone before and what is yet to come. In John 13.1, the reference to the Passover forms part of John’s distinctively Jewish and ‘anti-Jewish’ (as we perceive it) interest in the pilgrim festivals. These centred on the temple, but Jesus himself will take the place of the temple (John 2.21)—which, incidentally, explains the otherwise baffling saying in John 7.38 ‘as the Scripture says, out of his side will flow rivers of living water’. The scripture here is Ezekiel 47.1; Jesus is now the temple, the place of God’s presence; and the living does indeed flow from his side in John 19.34.

John’s interest in time, and particularly ‘the hour’, continues. Time slows right down; having spent the first half of his gospel on the three years of Jesus’ ministry, this section is dominated by the three hours at the meal table. ‘The hour’ that had not yet come (John 2.4, John 7.30, John 8.20) is now upon us (John 12.23). He loved ‘his own’, no longer the ethnic people to whom he had come (John 1.11), but those who now believed in him.

The ‘evening meal’ is in progress (John 13.2). There is no need to specify this as the Passover meal; though some have argued that John schedules everything a day early, so that Jesus is crucified on the Thursday in John at the same time as the Passover lambs were sacrificed, it is actually possible to reconcile this with the Synoptic accounts. John does not need to mention the bread and wine for three reasons.

First, he assumes that his readers are familiar with the other gospels, especially Mark, so he only needs to tell us what we do not already know from them. (See, for example, the way that Mark 6.7–13 dovetails with John 5, and Mark 6.7–13 is referenced in John 7.1.) Secondly, John is much less interested in the ‘sacramental’ than is often supposed. In his feeding of the 5000 the ‘eucharistic’ significance is decidedly muted; there is no mention of Jesus breaking the bread, so the careful formula of the Synoptic accounts is lost, and the more important theme is the echo of Moses giving manna in the wilderness. Thirdly, he has already done his theological preparation long before he reaches this point. In John 1.29, we have already been introduced to Jesus as the (Passover) ‘Lamb of God’; when you sacrifice the lamb, the next thing you do is eat it, and sure enough, Jesus says that we must eat his flesh (John 6.53) just as you would the Passover sacrifice.

As he prepares for the humble act of service, he not only knows that the hour has come, but that all power has been given to him by the Father, and that he is returning to him (John 13.3). This anticipates his discussion with Pilate about power in John 19.11, but also includes a challenge. It is not so much the question of what we might do with absolute power—though that in itself is a fascinating question—but to note what Jesus does with absolute power. He serves. He takes off his outer garment, in anticipation of what would later be done to him by force (John 19.23)—but on both occasions he is really in control (John 10.18).

At this point, most of us jump to the end of the passage, taking the exemplary lesson that John (and Jesus) wants us to learn.

“Do you understand what I have done for you?” he asked them. “You call me ‘Teacher’ and ‘Lord,’ and rightly so, for that is what I am. Now that I, your Lord and Teacher, have washed your feet, you also should wash one another’s feet. I have set you an example that you should do as I have done for you. Very truly I tell you, servants are not greater than their master, nor are messengers greater than the one who sent them. Now that you know these things, you will be blessed if you do them. (John 13.12–17).

This ties in with John’s ‘exemplarist’ focus on the cross as well; Jesus has ‘laid down his life for his friends’ and no-one has greater love than this (John 15.13). He calls us friends, and invites us to do the same to one another. This parallels teaching in the Synoptics (Mark 10.42–43), as well as deploying a stock phrase from Roman and Greek ethics (‘you will be blessed if you do them’) which is a prominent theme in the letter of James.

But the key turning point is the puzzling interaction with Peter in the middle of the episode:

“No,” said Peter, “you shall never wash my feet.” Jesus answered, “Unless I wash you, you have no part with me.” “Then, Lord,” Simon Peter replied, “not just my feet but my hands and my head as well!” Jesus answered, “Those who have had a bath need only to wash their feet; their whole body is clean. And you are clean, though not every one of you.” John 13.8–10).

Once again, typical of John, Jesus is speaking metaphorically, whilst Peter is taking him literally, just as Nicodemus and others have done before (John 3.4). And, again typically, Peter doesn’t understand now, but will later—after the resurrection and the giving of the Spirit, who will lead them into all truth about Jesus’ meaning. The language of ‘having a bath’ is similar to the common practice of bathing before a meal. But it has particular resonance with Jewish ritual washing, in a mikveh, which was then adapted to the Christian practice of baptism. Jesus is then contrasting the once-for-all act of baptism and the gift of salvation with the ongoing need to have Jesus serve us in the resource and equipping we need. In fact, unless we allow Jesus to wash our feet, we cannot wash the feet of others.

Christian discipleship is not simply about being nice to others and caring for them, important though that is (see 1 Tim 5.10) and despite David Cameron’s recent comments. It is, in the first instance, about allowing Jesus to serve us and wash our feet—giving us the spiritual provision we need day by day, above and beyond the service he gives in offering his life for our salvation.

Giving service to others is a hard lesson in our selfish world. But receiving service from others—and in particular from Jesus, day by day—is the hardest lesson of all in our competitive, self-sufficient world.

16 thoughts on “The real meaning of the foot washing”