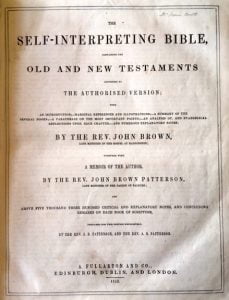 I was recently passed a very large and heavy volume, beautifully bound in leather-covered boards, by friends clearing out their late father’s library. On opening the weighty cover, I was confronted with the bold declaration:

BY THE REV. JOHN BROWN

I’ve done no research to establish who this John Brown was, and whether he was known for this work (or for others); the Bible dates from the mid-nineteenth century. But the title itself is enough to raise some key questions. Can a Bible be ‘self-interpreting’? What would it need to achieve that? It turns out that this volume, substantial though it is, is not dissimilar to modern-day ‘study Bibles’, where the editor explains the meaning and significance of the text, verse by verse or paragraph by paragraph, in order to avoid any doubt as to the implications of this passage for the reader.

Study Bibles have a long and (mostly) illustrious history. The first in English was the Geneva Bible of 1560, and it was revolutionary in including maps, tables, diagrams and illustrations, as well as cross-referencing links from one verse to another, and comments on doctrine explaining and summarising biblical teaching. It was so successful that it displaced the Great Bible (produced by Coverdale under the commission of Thomas Cromwell for Henry VIII) in popularity, and, because of disagreements about both translation and doctrine, it provoked the production of the Authorized (King James) Bible 51 years later, which ‘corrected’ some of its more Calvinist and Puritan choices in translation and notes.

But one of the most influential (notorious?) study Bibles was the Scofield Reference Bible of 1909. It popularised the previously obscure teaching of J N Darby and his ‘dispensationalism’, which remains the most common—and problematic—reading of NT eschatology in the English-speaking Christian world—and was the first printed Bible since the Geneva Bible to put notes and comments on the same page as the biblical text. This shows the power of such a strategy—both its benefits and its dangers. It is very hard for the reader to separate the authority of the biblical text from the authority of the commentator who writes the notes. That is why I have generally been very wary of study Bibles of any form.

And this raises the key question: what does it mean to trust in Scripture alone? The Reformation slogan of sola Scriptura is often misinterpreted on both sides to mean ‘read nothing other than Scripture’, in one direction representing an obscure pride in the neglect of wider culture, and in the other direction holding up the supposed impossibility of Reformed theology. But sola Scriptura does not mean reading Scripture alone (which would be better expressed by the phrase nuda Scriptura); it means taking Scripture alone as the final authority in matters of faith and doctrine, in particular as a reforming force for the Church’s own teaching.

You do not have to know very much about the process of translation to realise that it is a logical impossibility to take the text ‘alone’, without reference to other information about language, culture and background. How else can we know what words mean and how they are used, and therefore how we ought to translate them? This takes us back to the conflict between the Geneva and King James Bibles: should ekklesia be translated ‘congregation’, with its local and relational overtones, or ‘church’ with its institutional and organisational implications? Are episkopoi overseers or bishops?

Engaging in these questions raises another key issue for evangelicals—and indeed anyone who wants to take the Bible seriously. What is the status of those who unearth this background information, particular if and when some of it is contested? How does their work relate to the ministry of those who are forming the Church’s teaching position, either nationally or locally? It is not difficult to see that control of such information involves the exercise of power in a range of ways. Do such experts in background knowledge stand between us and the text as we read it, telling us what it can and cannot mean? Or do they stand alongside us, offering us information to empower our own reading and our hearing of what God has to say to us through these texts?

In the end, the question we need to ask is not: can the Bible interpret itself? but: Can I interpret the Bible on my own, without anyone else to help me? The answer to this question is clearly ‘no’, but this says more about me and my adequacy than it does about the Bible and its sufficiency! 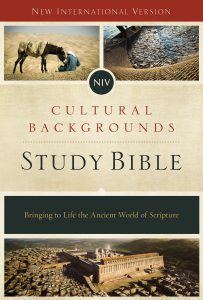 Because of these kinds of questions, I have been very impressed by the new NIV Cultural Backgrounds Study Bible. Its major difference from many other study Bibles is that, instead of standing between the text and the reader and offering interpretation and application, its stand behind the text in offering cultural and contextual information. Part of the blurb explains this:

The Bible was originally written to an ancient people removed from us by thousands of years and thousands of miles. The Scriptures include subtle culturally based nuances, undertones, and references to ancient events, literature and customs that were intuitively understood by those who first heard the Scriptures read. For us to hear the Scriptures as they did, we need a window into their world.

In the comments on the Book of Revelation, there are a good number of really helpful comments and background articles, including:

Evangelicals are sometimes accused of undermining their own commitment to sola Scriptura by allowing the dominant interpretive position of their tradition to mute the embarrassing challenges to that tradition in Scripture itself. I was struck by the way that this material, written by the prolific Craig Keener, refused to do this. It would have been easy to disguise some of the implications of this cultural background in order to accommodate a North American Christian audience—but the text does not flinch from taking a disciplined approach to exploring the issues fairly.

Rev John Brown’s ‘Self-Interpreting Bible’ is impressively bound, and a weighty addition to my shelves. But I have a feeling that I will be making more use of the NIV volume—and recommending it to others.

8 thoughts on “Does the Bible interpret itself?”