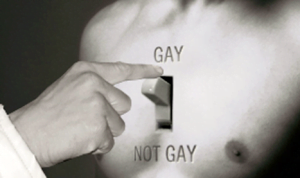 ‘Shame on you! You’re a disgrace! These people were born gay! How dare you suggest otherwise! I am going to make a formal complaint!’

This was the rather striking response to one of my seminars at New Wine this summer on the biblical picture of human sexuality. In response to the first question following my talk, I had set out why I thought the debate on same-sex sexuality was so contentious. Then the second question was about ‘nature versus nurture’—are people ‘born gay’? And why would God reject someone because of their sexuality? My first response was adamant: God does not reject anyone because of their sexuality. But I then went on to outline what the consensus of research appear to say. It was this which provoked the response above—and it illustrates one of the major problems about this area of discussion. Although it is often claimed that issues of research, science and causation of sexual orientation are not that important, since they do not solve the ethical or pastoral questions, in fact most people hold on very dearly to a particular view (for understandable reasons) and these views on the science often in fact shape ethical and pastoral responses.

This is likely to change with the publication of a major report in the latest edition of the US publication The New Atlantis. In its 143 pages (with several hundred footnotes), the authors Lawrence S Mayer and Paul R McHugh aim to summarise all the reliable, peer-reviewed research on causation of sexual orientation, issues of mental health in relation to those who are same-sex attracted and transgender, and questions of gender and sexual identity. In amongst all the technical references, there are some useful information which should be widely read. It is still surprising that people make quite ill-informed comments about the prevalence of same-sex attraction, which are corrected here:

But in fact you don’t need to dig through all the footnotes to find useful information, since there is not only a clear conclusion at the end, but a very easy-to-read Executive Summary at the beginning—which makes some very startling claims. I quote them here in full because they are expressed so concisely.

I think most people reading this summary will immediately see how contentious these conclusions are in the context of most public discussion of these issues. No doubt there will be scrutiny of these arguments, but they are unlikely to be contradicted for several reasons. First, the lead author appears supportive of LGBT+ rights, and in fact dedicates the report to the LGBT+ community:

I dedicate my work on this report, first, to the LGBT community, which bears a disproportionate rate of mental health problems compared the population as a whole. We must find ways to relieve their suffering.

Secondly, though the journal has been criticised as being ‘conservative’, it appears to have a commitment to honest appraisal of scientific evidence in a number of fields.

An editorial in the inaugural issue states that the aim of the journal is “to help us avoid the extremes of euphoria and despair that new technologies too often arouse; and to help us judge when mobilizing our technological prowess is sensible or necessary, and when the preservation of things that count requires limiting the kinds of technological power that would lessen, cheapen, or ultimately destroy us.”

Thirdly, both the qualifications of the authors and the care that they have taken in surveying the literature are impressive.

Fourthly, the conclusions they draw are actually no surprise to anyone who has done a modicum of reading in this area, since they line up with research from a diverse range of sources. For example, the 2006 study of 2 million Danes found that, in additional to correlation with parental marital breakdown, ‘[f]or men, homosexual marriage was associated [ie there was a statistically significant correlation] with having older mothers, divorced parents, absent fathers, and being the youngest child.’ 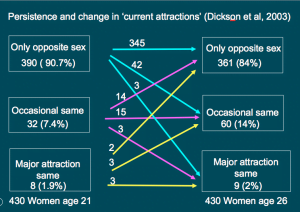 Lisa Diamond, former lecturer at Cornell University, herself gay and a campaigner for gay rights, explicitly rejects the notion of ‘gay identity’ as a basis for gay rights, since the fluidity of sexual orientation, amongst men but particular amongst women, rules this out. (Her research has been misused by some conservatives to claim that orientation can be changed through counselling; her point is not that it can be changed, but simply that, over time, it does change.)

A 2003 study in New Zealand showed the instability of SSA amongst women in early adulthood; less than 40% of those stating exclusive SSA at age 21 remained SSA at age 26, whereas nearly 90% of those other-sex attracted continued to be so five years on.

Overall, the conclusions of The New Atlantis in relation to causation match the kind of multi-causal model offered by Thomas Schmidt in his Straight and Narrow? from 1995. (I understand a new edition is in preparation.)

For those involved in current debates in the Church of England, one of the most striking things about this report is that it contradicts the assertions frequently made in the discussions as part of the case for a change in the Church’s teaching.

Loveday Alexander’s contribution to the Shared Conversations draws on the Pilling Report in order to take the existence of ‘homosexual identity’ as a given (pp 25–26); this frames her discussion of the biblical texts which, since they show no knowledge of such ‘identities’, must be treated with extreme caution. In her presentations on this, she has commented ‘We know what the science says: some people are born gay.’ She goes on to limit Paul’s teaching in his letters because ‘he did not know’ the phenomenon we are considering; confidence in the notion of ‘homosexual identity’ leads her to minimise and marginalise the relevance of the biblical texts.

Alan Wilson, in his More Perfect Union?, argues that same-sex sexual relations are ‘natural’ without any intrinsic difference from other-sex relationships.

People increasingly do not believe that homosexuality is harmful, sinful or shameful. They believe it is a phenomenon with nature, rather than an offence against it…All human options are equally natural. (pp 31–33)

The confusion here between different meanings of ‘natural’, and the strange move from what is, to what is moral, aside, this approach shows little understanding of what the scientific research actually shows.

Even more worrying is the chapter on ‘Being Human’ in Andrew Davison’s Amazing Love. The approach here, whilst claiming to be ‘objective’ and written by well-qualified authors, appears to be a long way out of touch with the actual research, not least because it leans so heavily on the discredited work of gay researcher Simon LeVay. It manages to claim that ‘What is clear is that scientists agree almost universally that there is a biological basis to same-sex attraction’, a claim that flies in the face of actual research as cited by Mayer and McHugh:

There is a serious question to be asked about how intelligent, well informed people are able to offer confident statements in influential texts which ignore, disguise or set aside the research consensus in this area—in order to bolster the case for change in the Church’s teaching. 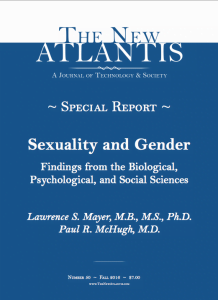 Where does this take us in the debate in the Church? For me, the most powerful lesson is the need to take seriously the pastoral challenge to create a space of welcome and support to the LGBT community. We need to echo the statement of the lead author, Mayer: ‘We must find ways to relieve their suffering.’ Despite the dominance of the sexuality agenda in our cultural narrative, and despite the prominence of gay men and women in the media, in culture and in government, this is a small part of our population, at around 1 to 1.5%. Yet it is a community which bears a disproportionate amount of social, relational and mental health issues; the section of the report covering this, from pages 60 to 73, makes harrowing reading, and is all the more powerful by being expressed in objective terms. If someone comes out to me as gay, the first (and only?) response I can make is ‘This will be a hard road; I will walk with you.’

As the report states, there is no doubt that some of these issues arise from contexts of social stigmatisation; it is quite right that all recent Church of England reports have included a clear rejection of stigmatisation, discrimination and homophobia, and that, in the past, Christians took the lead in decriminalising homosexuality and in offering a response to those suffering from AIDS. But the report is also clear that a significant proportion of these problems arise from other causes, and this is supported by evidence from Scandinavian contexts where social stigmatisation is not present because of the long acceptance of same-sex marriage. One of the most alarming concerns, which I had not read about previously, was that of inter-partner violence (IPV) in male same-sex relationships:

Every study in the review estimated rates of IPV for gay men that were similar to or higher than those for all women regardless of sexual orientation. The authors conclude that “the emergent evidence reviewed here demonstrates that IPV—psychological, physical, and sexual—occurs in male-male partnerships at alarming rates.” (p 72)

The recent public letter from evangelicals and others on Synod to the House of Bishops was quite right to comment:

We are committed to building a church that is genuinely welcoming to all people, irrespective of the pattern of sexual attraction that they experience. We would welcome initiatives to help local churches do this in a way that is affirming of and consistent with Scripture, and would hope to support suggestions you might wish to bring to Synod to that effect.

But the New Atlantis report offers another challenge too, and one that is in tension with the first. Even before we consider the alarming rates of promiscuity amongst male same-sex couples, and the consequent extraordinarily high levels of sexually-transmitted diseases in the community, the evidence undermines any claim that ‘marriage is marriage’ and that same-sex sexual relations are in essence the same as other-sex relations. The wide-ranging evidence shows that there is a pathology to same-sex relations which is quite different from patterns in other-sex relations (without pretending that the latter are without their own problems!) Even setting aside the concerns of theology, of the Church’s tradition, and the consistent teaching of Scripture, for the Church to head down a route of viewing same-sex marriage and relationships as parallel with or equivalent to ‘traditional’ marriage would be a serious error which flies in the face of the scientific evidence.

234 thoughts on “What does science say about sexuality?”