The slightly odd title to this post arises from a conversation I had with a friend last week. We were (in passing) noting the tone of the public discussion since the House of Bishops’ statement on same-sex marriage, and the response to the Pilling report, and she commented:

Of course, I cannot say anything—because I am a woman.

I was really taken aback by this, and had to think for a moment to realise what she was saying. It is repeated so often in the discussion—and by people on diametrically opposed sides of the debate—that it is now frequently assumed: if you believe that the Scriptural data allow or support the idea of women in leadership, you must also believe that the same is true of same-sex sexual unions.

This kind of careless thinking appears to be a growing part of the discourse on the issue, particularly on social media and online comment. It is sometimes expressed as ‘The Church changed its mind about women, so it can change its mind about gay relations’, or the converse point of view: ‘The Church sold the pass on women’s leadership, so it is not surprising that it is capitulating on gay relations.’

But there are two very powerful sets of reasons why these two issues are not linked in the way that the popular debate appears to imagine.

The first is to do with the nature of the relevant scriptural texts pertaining to the two issues. Some years ago, the late Dick (R T) France explored precisely this question in an early Grove booklet in the Biblical series, A Slippery Slope? which was subtitled ‘The Ordination of Women and Homosexual Practice—a Case Study in Biblical Interpretation’. Dick was coming from a position as a conservative evangelical, initially opposed to the idea of women in leadership, who changed his mind through his engagement with the biblical texts. He then found other conservatives criticising his reading of the texts:

In Britain, and more specifically in the Church of England, those who, like myself, have argued from Scripture for the appropriateness of ordaining women to positions of leadership in the church have often been confronted by others with the assertion that if our hermeneutical principles can lead us so clearly to discard the plain injunctions of Scripture on this one issue, we are bound also to approve homosexual practice, since the same principles apply. (p 3)

He then explores some of the relevant NT texts, and notes that different texts, read in a certain way, appear to point in opposite directions in relation to women’s ministry.

The interpreter is therefore left with a choice as to which of these two contrasting strands in the NT should take priority in drawing out guidance for modern church life. Hence the fundamental disagreement between equally sincere interpreters of Scripture over the ministry of women. It derives from opposite choices on this basic dilemma.

When he looks at the texts relating to same-sex relations, however, there is a quite different dynamic.

Does the Bible here also leave us with a dilemma?

Wolfhart Pannenberg answers that question decisively: ‘The Bible’s assessments of homosexual practice are unambiguous in their pointed rejection, and all its statements on this subject agree without exception.’ Our survey of the biblical material above supports his conclusion, which has also been the overwhelming tradition of Christian teaching through the ages. The situation is thus decisively different from that with regard to the ministry of women. On homosexual practice the Bible speaks with a consistent voice.

If France is right here, then not only is the discussion on these two issues of quite a different shape, but the resolution of difference needs to take a different form as well. The provision for opponents of the ordination of women was always built, in part at least, on the disagreement between ‘equally sincere interpreters.’

(You can read the full article by Pannenberg at Christianity Today online. He concludes his article in forthright style:

Here lies the boundary of a Christian church that knows itself to be bound by the authority of Scripture. Those who urge the church to change the norm of its teaching on this matter must know that they are promoting schism. If a church were to let itself be pushed to the point where it ceased to treat homosexual activity as a departure from the biblical norm, and recognized homosexual unions as a personal partnership of love equivalent to marriage, such a church would stand no longer on biblical ground but against the unequivocal witness of Scripture. A church that took this step would cease to be the one, holy, catholic, and apostolic church.

It is striking to read this written in 1996—not much progress in the intervening years!) 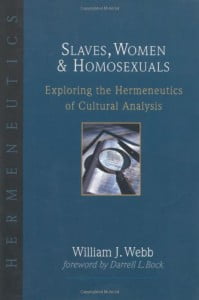 The second set of reasons has to do with the text in their cultural contexts. France is here considering mostly the world of the texts themselves, looking at their inner dynamic. A rather different perspective is offered by William Webb’s study of Slaves, Women and Homosexuals. Webb seeks to explore the ‘hermeneutics of cultural analysis’, in other words, looking at the way that the texts on these issues sit within their cultural context, historically understood, and seeing how that affects our interpretation.

Early on, he notes the following dynamic in biblical teaching on women compared with its contemporary cultural context in the ancient near east (ANE) and Graeco-Roman culture (p 76ff):

As one compares the biblical texts about women to their surrounding foreign context…a certain impression emerges. On the whole, the biblical material is headed toward an elevation of women in status and rights…:

1. Improved rights for female slaves and concubines…
2. No bodily punishment of a wife…
3. Women’s gain of (limited) inheritance rights…
4. The right of women to initiate divorces (in the NT)…
5. Greater rights in divorce cases (OT)…
6. Fairer treatment of women suspected of adultery…
7. Elevation of female sexuality…
8. Improved rape laws…
9. Softening the husband side of the household codes (NT)…

An overall assessment is captured well by the words of Eckhart Otto…:

The family laws in the book of Deuteronomy had a progressive and protective attitude to the legal status of women. They were deeply concerned with the restriction of male predominance.

Some of the context of this will be of scant consolation for those looking for a template for male-female relations read directly from the pages of the Bible—but that is precisely because we need to recognise that these texts belong to a different historical period and a culture far removed from our own. The kind of careful, historical, culturally aware reading that Webb offers is essential in making sense of what they say.

When Webb looks at the comparison on homosexual activity, a very different picture emerges (p 81f):

The homosexual texts also move the yardage markers relative to the original culture. Homosexuality [sic] was openly practised in the surrounding cultures. However, the Israelite and Christian communities did not accept these sexual practices in their theology, in their temple worship or in their everyday community living. Scripture interacts with the foreign scene of homoerotic behaviour on at least three levels:

So biblical tradition moved the cultural norms on homosexuality from a significant amount of tolerance and acceptance to non-tolerance and non-acceptance within the covenant community.

I don’t think some of the details of Webb’s analysis are beyond dispute, but it would be hard to overturn the general direction of his conclusion (p 252):

The comparative outcome is this: the homosexual texts are in a different category than the women and slavery texts. The former are almost entirely transcultural in nature, while the latter are heavily bound by culture.

So the textual, contextual and interpretative questions in relation to the two issues are quite different. I hope that recognising this will give my friend, and others like her, confidence to contribute to the discussion.

55 thoughts on “Unhitching women from gays”