A few weeks back, Ian asked which were the ten books that had shaped your life and ministry. Over the years, I’ve posted various lists of the best books on mission and missiology on my own blog, but I’ve never really pondered which ones have had the biggest impact on me. So I decided to take up Ian’s challenge.

Before getting to the actual books, it’s probably worth saying something about who I am and what I do. I’m hardly a household name—even in my own household! I’ve been a Christian since my mid teens; that’s a little over forty years, now (which makes me feel very old). After a spell working as a research botanist, I joined Wycliffe Bible translators in the 1980s. We spent six years living in a small village in Ivory Coast as part of the team translating the Scriptures into the Kouya langage and since then, I’ve been involved in various leadership roles in Africa and the UK. Last year, I stood down as Executive Director of Wycliffe and I’m now working for Global Connections and studying for a PhD. On to the books…

I suspect that my life may have taken a very different course if I had not read Through Gates of Splendour by Elizabeth Elliot shortly after becoming a Christian. Over the years I’ve read many missionary biographies, but none of them have had the impact that this one did. It should be compulsory reading for all new Christians!

Reading was very much a part of my Christian formation. When I went to University, my Pastor sent me a new book every month, generally something mind-stretching from Banner of Truth. However, the next book to really stick out was one that I bought myself—I Believe in Preaching by John Stott. In my early twenties, I received a few invitations to preach in small churches and I decided that I’d better learn how to do it, so I bought a book. The thing that grabbed me about Stott’s work was the call to clearly communicate the message of the Bible in today’s context. This was a radical departure from the largely cerebral teaching that I was used to and has shaped much of what I have done. I see Bible translation as being one obvious outworking of Stott’s approach to teaching the Scriptures.

Towards the end of our time in Africa, a number of books started to make me re-evaluate the work that I was doing. Translating the Message by Lamin Sanneh showed me that Bible Translation was far more than simply finding a convenient mechanism for transmitting the Gospel message. The act of translation empowers the church theologically and politically and diminishes the ongoing role of the missionary. Mission After Christendom by David Smith and Changing the Mind of Missions by Engel and Dyrness both made me start to question some of the ways that missionary agencies went about their work. Has the model of William Carey and Hudson Taylor run its course?

Perhaps the most important book that I read during this period was The Next Christendom by Philip Jenkins. This lays out very clearly the way in which the centre of gravity of the Christian world has moved from Europe and the US to Latin America, Africa and Asia. It was quite clear to me after reading this book that the mission world needed a very drastic overhaul. What was less clear is what this overhaul should look like. In some ways, that’s a question I’m still asking. 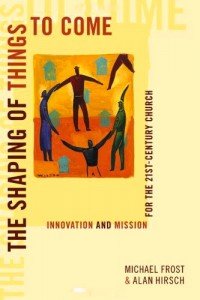 I found The Shaping of Things to Come by Frost and Hirsch to be fascinating. The authors wrestle with many of the same questions that I had been raising about mission work in rural Africa, but in the context of suburban Australia. It convinced me that cross-cultural missionaries and church leaders have a huge amount to learn from each other, though there is an unwillingness to listen across the church-mission barrier.

Over the last ten years or so, I’ve returned to studying some of the basics of my faith, things I last looked at in detail decades ago. Two books in particular have resonated deeply, pulling together threads of my reflection and experiences over the years and helping me to see things in new ways: Surprised by Hope by N T Wright; and Delighting in the Trinity by Tim Chester. I read dozens of books on the Trinity as part of writing an MA dissertation. Many of them were more erudite than Chester’s book, but few set my heart on fire the way his did.

The last book in my ten hasn’t yet had a deep impact on my life as it was only published last year. However, I believe that it will be the set text for cross-cultural missions study for years to come. I will certainly be turning to Goheen’s Introducing Christian Mission Today a great deal; I only wish I’d written it.

Time doesn’t allow me to talk about Andrew Walls, Jim Packer and Christopher Wright and other luminaries who have had a huge impact on me. However, my big regret is that my list of ten books only includes one book by a non-Western author.