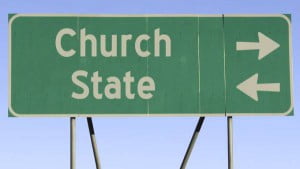 The continuing decline in Church attendance and the apparent marginalization of Christian perspectives within the country naturally lead to the question of whether the Church should be disestablished. Does it make sense to have the life of the nation tied in to Christian belief by having a Church ‘established by law’ if so few people are actively involved in that Church, and a growing number don’t share its beliefs?

In the April edition of Prospect magazine, two women who are well known in the media debate the question. Linda Woodhead is Professor of Sociology of Religion at Lancaster University, and has in the past asked questions about traditional understandings of what the Church is for. Lucy Winkett is Rector of St James’s Church, Piccadilly, London, and a regular contributor to Thought for the Day.

The format of the discussion is interesting, with case and response put three times by each contributor in turn. Winkett is second each time, and whilst that might seem like a disadvantage, it in fact gives her a persuasive last word. The central point of her first comment relates to the understanding of religion in the public space:

Of course, it’s not perfect as it is, but withdrawal is a greater risk. Competing political and religious ideologies would continue to be explored and argued over, but in darker corners, perhaps in more toxic atmospheres. My advice to the politicians about religious leaders—keep us where you can see us.

There is a parallel here with other current discussion. Aaqil Ahmed, the BBC’s Head of Religion and Ethics, makes a plea for greater profile of religion in broadcasting, since the greater global importance of religion in culture comes at a time of diminishing understanding of religion and the religious in many Western cultures. Yesterday, I was listening to Dr Rowan Williams, the previous Archbishop of Canterbury, give the 2016 Firth Lectures on religion in the arts, and he noted how often, in literature, religious characters are two-dimensional, portrayed by outsiders who don’t understand from the inside or with sympathy what a religious life looks like. They would both support Winkett’s comment:

[I]n a world more furiously religious than ever, and where religion is viewed with suspicion, we should be arguing for more establishment, not less.

Winkett goes on to explore the potential consequences of disestablishment for public and political debate. But, just as important, she notes the difference it makes on the ground, in the everyday lives of the people she ministers among.

The truth is that establishment doesn’t only find expression in parliament, but at the gathering at war memorials in villages, in the legal requirement for a C of E chaplain in every prison; in the multi-faith chaplaincies in the NHS and in the expectation from those who never go to church that the congregation and vicar will throw open their doors after a disaster befalls a community. Establishment is, at its best, an open door with a low threshold between matter and spirit, that insists on an eternal perspective to temporal issues.

Winkett offers us a coherent, informed and passionate defence of establishment in our current context.

Unfortunately, the same cannot be said of Woodhead. She starts with a half-truth about where we have got to:

Disestablishment has been happening for decades. It’s a process and in all essential respects the Church has already been disestablished.

There is some truth in this. Establishment is not one single thing, but a rope with many strands, some of which have indeed been severed. But the legal status of clergy in registering marriages they solemnize, the parish system and the right to baptism, the status of canon law within the legal system, the monarch as head of the Church are all important, formal elements of establishment which continue to be firmly in place—before we consider any of the cultural issues raised by Winkett.

Woodhead is not alone in complaining about the ‘quality of bishops’ in the Church—though like others in this camp, she would need to explain why the most dramatic decline in Church attendance occurred under the leadership of the ‘interesting’ leaders of the past. But the idea that Gordon Brown’s decision to ‘end parliamentary involvement in the appointment of senior clergy’ is responsible for a change in quality is quite fanciful. The C of E had an appointments process in place for many years; Brown’s decision not to choose between the two names offered was a minor change. George Carey was reputed to be the second choice behind John Habgood, then Archbishop of York—and chosen by Margaret Thatcher. I am not sure he would count as one of Woodhead’s ‘quality bishops’.

As an alternative to our current situation, Woodhead points to the case of Denmark as a preferable way of making establishment work. This is an odd choice—and I am slightly surprised that Winkett agrees on this point. Denmark, notwithstanding establishment, has one of the lowest church attendances in Europe. Sociologist Phil Zuckerman undertook an extended study of religion in Denmark, and found it paradoxical. He found a ‘moral, stable and humane’ society—but one that had no interest whatever in God or religion.

Though they denied most of the traditional teachings of Christianity, they called themselves Christians, and most were content to remain in the Danish National Church or the Church of Sweden, the traditional national branches of Lutheranism.

At the same time, they were “often disinclined or hesitant to talk with me about religion,” Mr. Zuckerman reported, “and even once they agreed to do so, they usually had very little to say on the matter.”

This indifference or obliviousness to religious matters was sometimes subtly enforced. “In Denmark,” a pastor told Mr. Zuckerman, “the word ‘God’ is one of the most embarrassing words you can say. You would rather go naked through the city than talk about God.”

This is not so much ‘believing without belonging’, but paying without believing, belonging or attending. If Woodhead sees this as a vision of ‘what could have been’, then she is arguing for a quasi-National Trust approach to the Church. As long as there is enough finance, and the buildings are preserved, then it doesn’t matter whether anyone is interested, attends, or believes anything. The analogy she uses in the article is that of the BBC. But this doesn’t fit the Denmark model, since the BBC would certainly have deemed to have failed if no-one actually watched. Not so for the Church in Denmark that she holds up as an aspiration.

And there is a serious question as to whether such an arrangement is sustainable. Establishment in Denmark is like a hollow shell, formed by historical belief, but now emptied of substance. It doesn’t take much—an advertising campaign by atheists—for the shell to crack and collapse, and thousands to decide that their membership of the Church is indeed meaningless, and they could be doing better things with their money.

It is a shame to see uninformed inaccuracies in this piece. To think that the Church has done nothing but ‘oppose or ignore’ developments in society could only be sustained by ignorance of what actually goes on at just about every level. But the saddest thing is Woodhead’s recourse to insults. General Synod is sometimes strange and frustrating, but to consider it ‘a grandstanding platform for the Church’s most extreme and unattractive elements’ is to descend to schoolyard taunts. The dismissal of bishops is similar—and unfounded. Robert Runcie, whom she lauds, was not universally well received; even Andrew Brown, who praises his personal qualities, admits that ‘There may be no lasting achievements of his primacy, after an earlier life of remarkable promise and success.’ What is most striking is that Woodhead offers neither sociological nor theological arguments for her position.

There is, in fact, a good, theological argument against establishment, but it is Winkett, not Woodhead, who offers it.

If one designed a state from scratch, it would be very surprising if we ended up with an established church. What’s more, followers of the Galilean preacher who never joined a political party or founded an institution find the sight of bishops in the House of Lords unpalatable.

So there is a debate to be had. But the practical issues that Winkett highlights means, I strongly suspect, that it is not the most urgent issue on most people’s agenda.

14 thoughts on “Should the Church be disestablished?”