How much should I share of my personal experience in the context of preaching? This is a perennial question facing anyone in ministry in the local church. My first encounter with the issue arose when I was a teenager. I remember one of the lay preachers in the church I attended making some point and illustrating with reference to his habits of shaving. When I made reference to this a few weeks later in conversation, he seemed very annoyed—and I don’t think it was just because I was an irritating teenager! It does show how any kind of personal disclosure makes the preacher vulnerable, sometimes in ways we cannot predict.

So what can we say about personal disclosure? Here are my reflections.

As part of teaching preaching, I used to go and listen to ministers in training to hear them preach, and usually aimed to have a conversation with them beforehand about what they are planning to say. Once when doing this, I met with the person preaching, and had read the prepared script. My observation was that the sermon seemed well structured, was rooted in good engagement in the Scriptural text, was well expressed—but did not give much away about the preacher’s own experience.

In the light of this, the preacher added two short comments from personal experience, and an already good sermon was suddenly transformed into something powerful that touched people’s lives.

Aristotle’s classic account of rhetoric talks of the three elements of logos (the rational content of the message), ethos (the credibility and engagement of the one speaking), and pathos (the emotional or affective appeal of the message). If we avoid personal disclosure, it is not so much the pathos that we miss out on, it is the ethos. Our listeners need to know that what we are saying is real for us if it is to have credibility.

One of the reasons why the preacher I mentioned above was hesitant about personal disclosure was that the experience was a family bereavement, and he was concerned that this could distract from the message—and quite rightly too. So his mention of it was brief and factual, which was enough.

Most of us have experienced that awkward sensation where the speaker is laying it on thick in terms of his or her own personal story, and it has come to dominate our listening experience. This does not mean we should avoid disclosure, but we should beware overdoing it.

This is particularly important in illustration by means of personal disclosure. My aim is not to tell my listeners to be like me (or even to avoid being like me), but to show how things might work in a contemporary life.

4. Stick with the facts

When talking about significant personal experience, it always pays stick with the facts and play down the emotion.The preacher above simply said at one point ‘We came out of the funeral service—only to find the car had been broken into.’ It elicited an audible gasp of sympathy from the congregation—and the impact would have been lost if the preacher had articulated his feelings.

Often in personal disclosure, less is more. As long as the situation is clear, you can allow your listeners to feel with you, rather than telling them how you felt. It is a good exercise for them to generate their own feelings of empathy, rather than have them generated by you on their behalf. Earlier this year I preached on the subject of sacrifice, and use the sinking of the Titanic as an example. I read the statistics of those who had survived: ‘Of the children on board, 48% drowned. Of the women on board, 26% drowned. Of the men on board…’ (after a pause) ‘…80% drowned.’ It needed no further comment; the same is often true when telling personal stories.

This is a really useful term that David Day uses in his writing on storytelling in preaching. You need to beware of the unintended emotional consequences of personal disclosure. A few years ago I heard of someone who said from the pulpit ‘I have committed adultery many times…in my heart.’ He was of course trying to communicate the importance of Matt 5.28—but there was enough of a pause after the first half of the sentence to make the shock of his listeners drown out anything else that was said.

Preaching is not the context to disclose serious personal issues, be that addiction, abuse, or anything which will trigger major issues—unless that is the focus, and there has been a warning beforehand, and there is follow-up afterwards. Neither it the place to disclose family secrets, or the amusing habits or inner thoughts of your children. They won’t thank you for it.

6. Make sure the the focus remains on God

Illustrations from the lives of others and from our own experience are important aspects of our communication. But there is always a danger that in doing so, we focus on what we have done or what our listeners ought to do, rather than on what God has done. This is part of a wider issue, but we need to be careful to use personal disclosure to say ‘This is the reality—God understands it’ or ‘This is what God can do in this situation’, offering our listeners the hope of possibility and not the burden of duty. 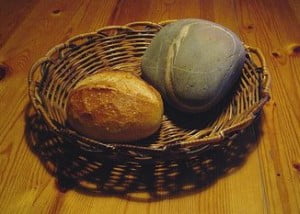 7. Remember that Jesus did it

When on his own, Jesus was tempted by Satan, conversed with a man at night and a woman by a well, cried out to God in Gethsemane—but how do we know this? One answer, from a particular school of biblical study, was that it was made up. But a more convincing, and perhaps challenging, conclusion is that Jesus was in the habit of recounting his personal experience to his disciples.

Personal disclosure is an important part of teaching, discipling and Christian leadership, so we need to make it part of our preaching.

11 thoughts on “Personal disclosure in preaching”