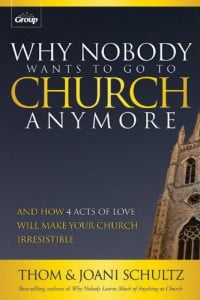 I am continuing to work through Thom Shultz’ Why Nobody Wants to go to Church Anymore, and we have been discussing it in our ‘missional community’ in St Nic’s church. Having explored the question of whether church can become ‘irresistible’, we looked at the first two of the four Acts of Love: Radical Welcome and Fearless Conversation.

The third Act of Love is Genuine Humility, which Shultz characterises by:

and he includes some striking examples of this. One student group set up a confessional on their college campus, but instead of inviting individuals to confess their sins, they were invited to hear Christian confess the sins of the church. It is a powerful example of ‘admitting mistakes’, and one that is needed where the institutional church is seen by many as being a real obstacle to taking the claims of Christian faith seriously.

In our discussion, the first thing that came to mind in thinking about humility was the examples we ourselves had seen of humility in others. I was reminded of John Stott, who used to sit at the back of All Souls talking to homeless men who had wandered in, and to whom he was simply known as ‘John’. I was on the first Springboard mission with Michael Green (remember the Decade of Evangelism?!) and remember one evening when we were eating with our hosts. Michael was the first up from the table to do the washing up. Just last week, someone commented to me about his experience of attending Dick France’s funeral in 2012. Dick was a leading evangelical NT scholar, but was known by one of the congregation as a kind pastor who also sold tickets for the local steam railway. ‘Oh, and I think he might have written a book on the NT once.’

It is possible to dismiss such examples of ‘great people’ doing ordinary things—after all, ordinary people do them all the time! And yet they offer a profound insight into the importance of humility: when any of us sets aside our sense of self-importance and is ready to bless others with acts of service, it leaves a profound impression, and it both challenges and frees other to do the same. Paul explores this theme in the example of Jesus most clearly in Phil 2.5–11:

In your relationships with one another, have the same attitude of mind Christ Jesus had:
Who, being in very nature God,
did not consider equality with God something to be used to his own advantage;
rather, he emptied himself… 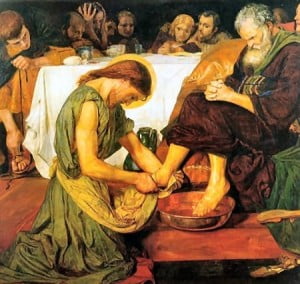 As we reflected on examples we had seen, we noticed something else as well. Those who exercise humility very often seemed to be those who were secure in themselves, no matter what their background, and so did not need to assert their importance over others. So humility is not the sense of personal unworthiness, or self loathing—quite the opposite. It is as we find our security in God that we are free to offer ourselves to others. Again, we see this supremely in the example of Jesus. In the story of Jesus washing the disciples’ feet, John starts his account with precisely this sense of Jesus’ own security in the Father:

It was just before the Passover Festival. Jesus knew that the hour had come for him to leave this world and go to the Father. Having loved his own who were in the world, he loved them to the end. (John 13.1)

It is Jesus’ security in the Father which allows him to undertake this extraordinary act of service, an act which epitomises his relationship with all his followers. And, as I have explored elsewhere, the challenge for us then is not simply to imitate his action, but to allow him to minister to us so that we, too, can enjoy this secure heavenly relationship which will free us into earthly service.

In the chapters on humility in Shultz’ book, he goes on to explore a different dimension which is, in some ways, more surprising. It makes a link with the previous section on fearless conversation: are we humble enough to be willing to learn from people with quite different believes from us? He gives several challenging examples, some of which relate to the current Shared Conversations on sexuality in the Church of England: listening to a transgender woman talk about her own personal experiences without offering judgement; inviting Mormons to a meeting where they are allowed to explain their own beliefs; creating a genuine sense of encounter with people who follow Wicca.

In justifying such an approach, Shultz draws on two aspects of Jesus and his teaching. First, he argues that genuine humility flows from Jesus’ expression of the Golden Rule: do unto others as you would have them do unto you (Matt 7.12). If went to visit someone with a different set of beliefs from you, would you want them to spend the time telling you why you are wrong, and what you should believe? No, you wouldn’t—so why do Christians do that to others?

Secondly, he notes how often Jesus holds back from telling people the answers, and how he appears to be asking genuine questions in his encounters with them. If Jesus, who presumably had all the answers, held back from imposing them on all the people he met, shouldn’t we?

As we discovered in reflecting on Fearless Conversation, this does assume that we are confident in what we ourselves belief—as with humility expressed in acts of service, humility in openness to others flows from a sense of security, not insecurity. It also implies that we have a space where we can explore our own questions in a context where we might discover some clear answers. Jesus’ questions to others never appeared to flow from his own lack of clarity about the truth. For me, that left one big question unanswered in the book: can we be confident in our own faith? Shultz added in a another factor to the debate: we are all on a journey, and none of us has all the answers, so we need to be willing to learn from others, even those very different from ourselves. In a church culture which looks quite ghettoised, where it is very easy to lapse into a kind of ‘culture wars’ approach to belief, I can see how refreshing that is. But in many parts of the UK context, things are different, and many in the Church of England appear to question whether we actually have anything distinctive to bring.

But all this challenged us to take some practical action. So we have committed to, over the next four weeks, ask three of our friends who are outside the church or faith what questions they have about faith. We then hope to invite as many as will come to explore them at our meeting in July. It should be an interesting journey!