In just about every deanery I have been involved with, the allocation of ‘parish share’, the contribution to the central financing of the diocese, has been a matter of contention. As with many decisions, disagreements are heightened when they are focussed on the practical decisions involved. This is often because underlying principles have not been discussed and agreed, or simply remain unclear. Focussing on principles makes the conversation calm down, not least because the consequences in practical action are postponed for a while, and when they come they can be debated on the basis of shared understanding.

So it was interesting and refreshing last night to spend time with deanery clergy and treasurers talking about theological principles that might shape our decisions. (I am part of Nottingham South deanery, the largest contributor to the finances of Southwell and Nottingham Diocese.) The first part of engaging in principles was to move away from the language of ‘share’ (which focusses on what we have to cough up) to the language of ‘giving for ministry’ which highlights what the discussion is really all about; something like 90% of the diocesan budget direct supports ministry costs.

As part of the discussion, I offer the following seven principles that arise from a biblical theology of giving for ministry.

1. All we have belongs to God; we are not ‘owners’ but ‘tenants’

This surfaces prominently at a couple of points in the OT, the most obvious of which are Ps 24.1, ‘The earth is the Lord’s and everything in it’ and 1 Chronicles 29.11–14 ‘Everything in heaven and earth is yours…of your own have we given you.’ This second example is particularly interesting, since the context is precisely of giving to ministry, in the shape of building and dedicating the Solomonic temple, and it is used (in a slightly adapted form) in many Anglican churches when the offering is taken.

But this understanding is, in fact, deeply embedded in OT understandings of money and resources. In the agrarian economy, your land was your security, your pension and your source of income. So the assertion that ‘The earth (= land) is the Lord’s’ is not just abstract theology, but a direct statement about financial management. Israel’s occupation of the land that has been given to them is less about ‘possessing’ anything than receiving it as a gracious gift from God, for which they are accountable in their use as tenants and stewards. (This is, of course, the root of the notion of ‘stewardship’ in the church, though in fact I think the word has become tired and lost its force, so that people hear it as ‘giving campaign.’)

It is this notion which underpins the principle of the Jubilee in Lev 25, a practical and theological notion which does not appear ever to have been put into practice (as far as we can tell). If it all belongs to God, then the accumulation of wealth by one person or group is not much more than an ‘accident of blessing’. It is not to be used to exploit others (hence the ban on charging interest in the OT) and needs to be periodically corrected. Ultimately, no individual owns anything, but has it on trust from God.

If we really lived out this principle, the whole of our lives would be transformed—not just our approach to giving for ministry! It does not merely give insight into what we do with our money; it says something fundamental about what our money and possessions actually are.

2. The work of the Spirit is a rediscovery of this creation principle

A consistent feature of the NT language about the Spirit and our communal life under the Spirit’s direction is the way is it presented as a return to God’s original creation intentions. In Galatians 5.25 Paul urges his readers: ‘Since we live by the Spirit, let us keep in step with the Spirit.’ Our individualising reading makes us think about each believer keeping in step with the Spirit’s guidance of us. But the word Paul uses, stoicheo, suggests walking in a row, being aligned with each other as well as the Spirit. There is a rediscovery of the original unity of humanity in the Spirit’s work amongst us.

Elsewhere, Paul talks about those in Christ as ‘new creation’ (2 Cor 5.17), and as the ‘first fruits’ of what the renewed creation will be (Romans 8.23)—the corner of the field where the crop has ripened early and is ready for harvest ahead of the rest. And this is how we need to read the narratives of Acts. The events of Pentecost, when the disciples speak in the languages of all the nations gathered in Jerusalem, must be read in the light of Genesis 11 and the Tower of Babel; God’s confusion of language because of human sin has become clarity of language because of the redemptive work of Jesus made real by the Spirit. The description of the early disciples ‘having all things in common’ (Acts 2.32, 44) must similarly be seen as the enacting of the Jubilee principle that all things belong to God and should be shared ‘as each has need.’

3. Ministry costs money—and it is worth it

Just over half way through Acts, there appears to be a significant moment for Paul’s ministry whilst in Corinth, in Acts 18. Up until now, he has been supporting himself through his work as a tentmaker, which is how he meets Priscilla and Aquila. His concern has been not to burden or take advantage of those he preaches to, in contrast to travelling preachers of philosophy (1 Thess 2.9). But when Silas and Timothy come from Macedonia (Acts 18.5), Paul is released to work in ministry full time. It is clear from 2 Cor 11.9 and Phil 4.14–15 that they brought money as well as news and companionship. This is in line with the practice of other apostles, who have been supported in their ministry (1 Cor 9.5) just as Jesus was (Luke 8.3).

Interestingly, the language of a gift which frees those in ministry from needing to support themselves continues to shape the Church of England’s understanding, reflected in the terminology of ‘stipend.’ This is not a salary paid for services performed, but an allowance which frees those ordained to give their time fully to their ministry.

4. Those who make their living by ministry deserve to be paid well

In 1 Tim 5.17, Paul talks of those with the responsibility of oversight being deserving of ‘double honour.’ Although this has often been read in social terms (in the sense of respect), there is a strong consensus that in fact he is referring to financial remuneration. (The word that he uses, time, in contemporary Greek means the price of something; you can find it on menus in restaurants and in shops.)

This approach to ministry and finance has been brought into disrepute for many in the megachurches in North America and in places that preach the ‘prosperity gospel’, that God shows his favour by blessing people with financial success. Against this, Jesus in Mark 10.30 is actually referring to the blessing that comes through Acts 2-style sharing of resources in the community of faith. But the principle of appropriate reward is one the Church of England needs to take seriously. In my experience, he C of E does not match up well in recognising the value of ministry compared with other denominations!

5. A key principle in finance is that of equality

2 Cor 8–9 often features in discussion about giving, since it is here that Paul talks at length about a collection he is wanting to take in support of the Jerusalem church. A central part of his argument relates back to the creation principle in the OT and its rediscovery in the life of the faith community shaped by the Spirit—the central principle of equality (2 Cor 8.13–14). There are two important implications in thinking about giving for ministry. 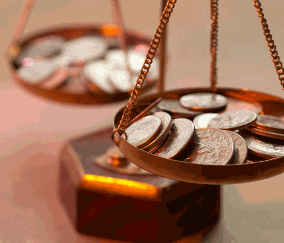 The first is that this should not be seen as some sort of ‘tax’ on churches. Parish share formulas which are based on congregational numbers are often described as ‘a tax on growth’, since if numbers attending increase so does the amount required by the diocese. This kind of language (and mechanism?) suggests that something has gone badly wrong in the discussion.

Secondly, Paul’s assumes here a principle of ‘cross-subsidy’ in the light of different financial situations of the believers in different contexts. When one group has been blessed with an abundance of resources, then it is right and natural that they should share with those who have need. Again, Paul roots this in a rediscovery of an ideal moment in Israel’s past, the collection of manna in the desert, where those who collected a lot did not have too much, and those who collected little still had sufficient. The significance here is that all provision comes from God and should be distributed as he would wish.

Within the appeal for his collection, Paul roots his understanding of human attitudes in his understanding of God. Our generosity reflects our understanding of the generosity God has extended to us (2 Cor 8.9). When we see how lavishly God has provided for us in creation and loved us in redemption, then why would we not act the same way towards others? This is similar to Jesus’ teaching about the unmerciful servant (Matthew 18:21-35), where it is worth noting that the amount owed to the servant, 100 days’ pay, was not trivial.

More generally, Paul argues that our attitude to one another in all respects should reflect that of Jesus: ‘In your relationships with one another, have the same attitude of mind Christ Jesus had’ (Phil 2.5).

7. Our approach to giving for ministry reflects our love and trust of one another

Underlying all the examples in Acts, and Paul’s teaching in his letters, is the assumption that we belong to one another as the body of Christ and the temple of the Spirit. Debates about money are often thinly-disguised expressions of lack of trust and agreement, and it is these which need greater attention.

What was most interesting about discussing these principles is that we had a very positive meeting, with churches thanking other churches for the mutual support they had enjoyed—not the most common result of such meetings!

I tabled these questions for further reflection, to which we will return at a later meeting:

Which of these principles would you prioritise?

Which do we understand and live out well, and which do we need more focus on?

What other principles would you add to these?

How might each of them shape our approach to giving for ministry within the deanery?

Feel free to make use of this material in your own deanery (or equivalent)—and let me know of any other principles you would wish to add.