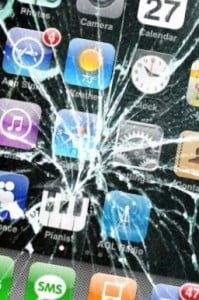 Having done this myself twice over the New Year 2009/10, I am now the world’s expert on the best way to do it.

Like many others have, I dropped my iPhone on Christmas Eve and the glass crazed. Apple quoted £114 to replace, so I looked elsewhere. A plea on Facebook yielded advice from a someone we had met in the Australian rainforest, who said a teenager could do it in five minutes. I quickly found the parts, and video instructions on YouTube, so went for it. BUT it was not quite as straightforward as I had thought, since most sources don’t give you all the information you need. What follows relates to the iPhone 3G and 3GS but not the earlier iPhones, which are more complicated.

You need to know that the iPhone screen comes in four parts: the glass; a plastic sheet attached to the glass called the digitiser which detects touch; a plastic frame glued to the glass screen [really important this one] which attaches it to the fourth part; the LCD screen. You can buy all these things separately, but whatever you do,