In the discussion about my explanation of the Primates’ Meeting, James Byron (a regular commentator on this blog, who comes from quite a different theological position from me) puts his finger on what is at the heart of the matter:

The press portray this split as being about sex, when in reality, it’s about authority and revelation, and sexuality is just the presenting issue.

This agrees with something I have said quite often. What matters in the current debate about sexuality has less to do with the consequences of any decision, and more to do with the presuppositions that you need to make to want to change the Church’s current teaching. This is well illustrated by Martyn Percy’s second article in Modern Church.

As with his previous article, Martyn takes some breath-taking theological short-cuts on the way to making his (as a result self-evident) conclusion.

As baptised members of their churches, living their Christian lives faithfully, and love lives lawfully, [lesbian, gay and bisexual Christians] will have full citizenship in heaven with their fellow Christians.

This statement completely short-circuits the theological work that needs to be done (and is one of the central issues in the Shared Conversations): do same-sex sexual unions constitute faithful Christian living, i.e. is this a pattern of life, ‘created and hallowed by God that all should honour’? Martyn writes as though the answer here is clear and needs no further discussion or rehearsal. He then goes on to talk about people ‘being treated equally in heaven’ and its implications that all should be ‘treated equally’ now.

As appealing as this sounds, it simply does not match up with a NT theology of salvation and sanctification. On several occasions, Jesus talks of those who are ‘great in the kingdom of God/heaven’, not as a description of ‘degrees of saved-ness’ but in order to differentiate those things that are of greatest importance, both now and then. Paul has a similar vision of differentiation in talking about the value of ministry in 1 Cor 3.10–15. We should each ‘build with care’, since ‘fire will test the quality of each person’s work’ (1 Cor 3.10, 13). I find this a sobering, humbling and encouraging verse, since I know people who have probably ‘built’ much better than I have—and it seems to matter. One of the repeated mantras in the debate on sexuality is that ‘we should not discriminate’—yet the NT constantly invites us to discriminate carefully between what is holy and what is not, what is ‘true, noble, right, pure and lovely’ and what is not (Phil 4.8).

But this theological mistake is not as serious as the one that follows. Martyn goes on to reflect on his radio debate with Chris Sugden:

Yet a minority of Conservative Evangelicals appear to believe that lesbian, gay and bisexual Christians can only be in heaven if they are celibate on earth.  The reasoning being that you might forfeit your salvation if you haven’t repented of your behaviour (rather than orientation).  In other words, you do have to (partly) earn your salvation.  It is not by grace alone. God’s love is re-cast as conditional; dependent upon good behaviour.

The equation that Martyn makes here is that being saved by grace means that behaviour does not matter. If we think grace demands a response of changed living in order to have its effect, we are not being true to the gospel. He claims the theological high ground by identifying with the great father of the church, Augustine, against the heretic Pelagius. (It is always interesting to see the way heretics of the past provide us with useful polemical justification.) His mistake here is illustrated simply by the saying attributed to Augustine: ‘Pray as though everything depended on God. Work as though everything depended on you’ which does indeed suggest that our response matters. In fact, Martyn’s understanding of grace does not come from Augustine, but I think arises from nineteenth-century liberal Protestantism, suggesting as it does that God’s grace doesn’t effect any change in us. The same idea was expressed succinctly in a post by Andrew Lightbown. He mocks ‘GAFCON and their admirers’ using similar language to that of Martyn Percy:

Salvation it seems is about conduct, works and perceptions of morality and not about faith, grace and mercy. 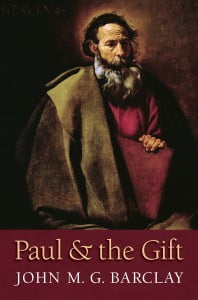 To see the problem with the mockery, we need to go back further than Augustine to Saint Paul himself. John Barclay, Lightfoot Professor of Divinity in Durham, has just released the first of a two-part magnum opus on Paul’s understanding of grace, Paul and the Gift. As he explains to Wes Hill, a former Durham research student, Paul transforms first-century understandings of gift, exchange and indebtedness to communicate the radically unconditioned nature of God’s grace:

Paul talks about Christ as the gift of God, the grace of God. What is striking about this is that this gift is given without regard to the worth of the people who receive it. God doesn’t give discriminately to seemingly fitting recipients. He gives without regard to their social, gender, or ethnic worth. Nothing about them makes them worthy of this gift. To deny any match between God’s gifts and the worth of recipients was, in Paul’s day, a theologically dangerous idea. It made God seem arbitrary and unfair. It meant that grace was unpredictable and that the world might become disordered. And this view of grace breaks all sorts of social norms and expectations. The gift of Christ is larger than it should be. It is undeserved forgiveness.

As Barclay goes on to argue, this idea led to the early Christian communities being remarkable social melting pots, in particular breaking down the divide between Jew and Gentile as an ethnic distinction. This radical inclusion should also mark the church today, and for the same reasons.

But, says Barclay, if grace is unconditioned (in the sense that you do not need to be worthy to receive it), it is not unconditional.

Luther was anxious about any language of obligation or obedience if it implied trying to win favor with God. As a result, some Protestants believe it’s inappropriate for God to expect something in return, because it would somehow work against grace. They believe a gift should be given without any expectation of return. However, that can lead to notions of cheap grace—that God gives to us and doesn’t care about what we do. On the other hand, the Calvinist and, in different ways, the Methodist–Wesleyan traditions have rightly understood that the gift of God in Christ is based on conditions, in a sense. While there is no prior worth for receiving the gift, God indeed expects something in return. Paul expects those who receive the Spirit to be transformed by the Spirit and to walk in the Spirit. As he puts it, we are under grace, which can legitimately lead to obedience, even obligation. (emphasis mine)

Lest we think that this is a particular preoccupation of poor old Paul, who hasn’t quite managed to let go of his Pharisaic roots, a quick rehearsal of the story of Scripture will confirm this twin focus of grace as unconditioned, but not unconditional.

So it is not all that surprising that, when Jesus comes announcing the presence of God’s reign amongst his people (the ‘kingdom of God’), he immediately calls for—and here is the paradox—a response of repentance for those who would receive this free gift of grace. The invitation of grace offered in Jesus is at one and the same time an invitation to a life of costly obedience—if it wasn’t, why would so many (including his closest disciples) have struggled to come to terms with it? It is there in the gospels; it is there in Paul; it is there in the letter of James; it is there in the book of Revelation. When the risen Christ comes to his people in the seven cities of Asia, his judgement of every single one of them is based on the fact that ‘I know your works‘. In other words, has this free gift of grace actually made a visible difference in your life together?

To agree with Martyn Percy on sexuality (and Andrew Lightbown’s succinct summary) it is not a question of debating one or two obscure proof texts, nor debating the niceties of Greek or Hebrew grammar. Rather, you need to disregard a central theme, running through all of Scripture, regarding the essence of God’s way of dealing with humanity—that grace, though unmerited, does indeed make demands. As James Byron said quite rightly, sexuality is just the presenting issue; the real question is about authority and revelation and the nature of God’s grace.

This has been confirmed by other conversations I have had this week. Here are the arguments put to me on why the Church of England has got it wrong on sexuality:

Each of these positions is based on a valid observation. For example, we do need to take seriously that Jesus was a first-century Jew, that there is some challenge and debate about making sense of Scripture, that ethical positions that appear to harm need questioning. But each of these elevates their own concern as the determining issue, and shapes everything else around it.

None of this in itself settles the ethical question in hand—the question which Martyn Percy simply skips over—of whether those in same-sex sexual unions are ‘living faithfully’. But it does show why Martyn Percy’s position is so deeply flawed. Accordingly to his theology, Jesus did not offer his blood of the new covenant (since covenants involve obligations) but the blood of a new free-for-all. Martyn replaces Paul’s great ‘Therefore…’ in Romans 12.1 with a ‘so what?’ That is why the Primates discussion is not really about sexuality, but about something far more important than that.

80 thoughts on “What does grace demand?”