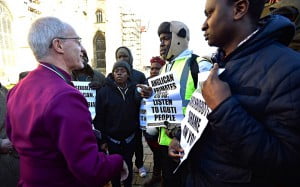 Jayne Ozanne, former director of Accepting Evangelicals, commissioned YouGov to undertake a poll of attitudes to same-sex marriage, and has done a good job of getting the results out in the media yesterday and today. It featured on Radio 4 this morning, and is reported in The Guardian and The Telegraph.

Peter Ould, who is a professional statistician, makes observations about the actual polling, and then I offer some reflections about the wider process.

Last night the internet was abuzz with a YouGov poll[1], commissioned by the revisionist campaigner Jayne Ozanne, that was purported to show that a majority of Anglicans now supported same-sex marriage. It did no such thing.

The survey questioned 6276 British adults on their religion and attitude to same-sex marriage. The first question of interest to us was their “religious affiliation”. We don’t have the actual question asked given us (very poor practice) so the best assumption is that the internet questionnaire asked “What is your religious affiliation?” 1652 of the 6276 respondents answered “Church of England”, “Anglican” or “Episcopal” (Episcopal probably refers here to the Episcopal Church of Scotland). Reweighted (the poll adjusts the numbers to reflect the actual British population) that is 1786 Anglicans out of 6276.

At this point we get out our calculators and start stroking our beards. 1786 out of 6276 is 28.5%. Out of a Great Britain population of around 62 million, that equates to almost 18 million people who are “Anglicans” under this definition of the word. Given that in the last fortnight the Church of England published 2014 attendance figures that told us that the number of people at church service every week was just under 1 million[2], this means that a staggering 95% of the “Anglicans” in Jayne Ozanne’s survey do not attend church as part of their regular weekly pattern.

But it gets better (or worse, depending on your perspective). On the Changing Attitude Facebook page Jayne claims,

The rather unfortunate (fortunate?) thing is that Ian [Paul] didn’t take time to look at the YouGov results himself, if he had he’d have seen we asked two questions to define Anglicans – one which asked “what affiliation” and then one that asked “where do you practice/belong” … both had the same results, although the second group was obviously smaller.[3]

What’s interesting about this question is that not only did it achieve the same results in favour of same-sex marriage for Anglicans as the first question did, it also achieved the same results (within the margin of error) for Roman Catholics, Jews, Baptists etc. Why was this? Well quite simply, because the question doesn’t ask anything meaningfully different than the first one. Asking about which group or community you are involved in or whose gatherings you would attend isn’t in any sense a different question to religious affiliation.

The one question that is missing in this survey, I suspect deliberately, is a stratification question about church attendance. What do I mean by this? Look at some of the opinion polls conducted before the General Election last year. As well as asking for party affiliation they will also ask a number of questions that attempt to quantify and stratify (and hence qualify) opinions. So for example, the opinion poll might ask something on the lines of “How likely are you to vote?” or even “Did you vote in the last Election?” The respondent then grades their likelihood to vote on a scale of 1 to 10 and the voting intention is weighted accordingly. And of course this makes perfect sense. It doesn’t matter if someone says that they are going to vote Tory if they also tell you that they are very unlikely to actually bother going to the polling booth on Election day. You don’t want to count them as a full Conservative voter do you?

I suspect that you would see some remarkable differences between the group that attended church once a week and the other 95% of “Anglicans” in Jayne Ozanne’s panel. I also suspect that this is the very reason that Jayne Ozanne didn’t ask YouGov to put this question to the panellists.

The bottom line is this – Jayne Ozanne’s questionnaire tells us absolutely nothing about the opinion of the Anglicans who sit in the pews week after week and actually make up the core membership of the Church of England, who support it financially and are worshipping and praying in their local parishes as a witnessing community. A staggering 95% of her “Anglicans” don’t actually attend church regularly, if at all. The opinion poll is just a puff piece to support a political agenda and it specifically avoids asking the one key question which might tell us something about what Church attenders actually think on the subject of same-sex marriage.

Peter Ould is a Church of England Priest and works as a Banking Consultant, delivering mathematical modelling projects into Financial Institutions across Europe, the Middle East and Africa.

Peter’s analysis is enough to make us wary of headlines based on polls when it comes to a complex issue like the theology of marriage. The headlines become even more suspect when you look at the poll questions in detail.

Those who said they believed same-sex marriage was ‘right’ were asked a further series of questions: 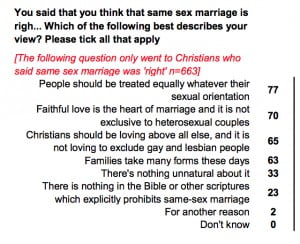 How would you answer those questions? I don’t think I would have any hesitation in answering the first four questions ‘Yes’, and I would have to think hard about the fifth one, since it all depends on what you mean by ‘natural’ and whether you think ‘nature’ is as it ought to be. (It is perfectly ‘natural’ for men to be aggressive, for example.)

But the most striking question for me was the sixth. It is worth noting that the question doesn’t at one level tell us very much; if I had never actually read the Bible, then I would probably be happy answering ‘yes’ to this. (There isn’t a ‘don’t know’ option). But more striking is the fact that a full 77% of those who believe that same-sex marriage is ‘right’ would not state that ‘There is nothing in the Bible’ to contradict this view. I am conscious that there is a danger in over-interpreting this (the question asked ‘which would best describe your position). But it suggests very strongly that, for those supporting same-sex marriage, the Bible is either mistaken in what it says, or is not actually very relevant. If Peter’s analysis above is right, then this is not very surprising, since most of the people here don’t actually attend the Church.

This raises two questions. First, what is the relation between theological reflection and popular opinion when it comes to forming the doctrine of the Church? Jeff Astley and Ann Christie have done some serious research on what they call ‘ordinary theology’, looking at what lay people ‘in the pews’ actually believe. (You can read a helpful summary in their Grove booklet P 110 Taking Ordinary Theology Seriously.) What they uncover is that many ordinary Anglicans neither believe in the divinity of Christ, as expressed in the gospels and the creeds, nor believe that in any objective sense Jesus death has “saved” us. (Interestingly, this was more prevalent in “liberal” churches, much less the case in “evangelical” churches.) What is Astley’s response to this?

Should we not acknowledge this ‘multi-dimensional’ nature of Christian belief? And therefore the multi-dimensional nature of the person and work of Christ? This perspective would permit many christologies and soteriologies, and this may be a strength rather than a weakness in the church.

Faced by the evidence of the ordinary theology of other people, the reaction of many of us (not only clergy) is to strive to amend it. With a little more humility, and a lot more patient theological listening, might we not come to feel that—sometimes, at least—another’s theology can correct our own?

In other words, ‘orthodox’ understandings of who Jesus is and what he does are not shared by many in the pews, and they can be a barrier to admitting people into membership of the church. So the obvious thing to do is to abandon them—or at the very least be highly flexible. This is where we get to when we do ‘theology’ by opinion poll—and it doesn’t look very Anglican to me.

The evidence of the poll appears to reinforce the notion that those pressing for change do so on the basis of a theology based on something other than the Anglican commitment to the primacy of biblical theology.

Second, I am trying to work out what Jayne is up to. She continues to claim the label ‘evangelical’, but I am not sure what evangelical would prioritise opinion polls over biblical theology. The headline in the Guardian article (‘Church of England members back same-sex marriage’) is thoroughly misleading, since the people surveyed are not ‘members’ in any meaningful sense. I was going to lay the blame for this on poor reporting—until I realised that that was the wording Jayne had supplied in the press release.

To date, this blog has only commented on the question of sexuality in about 9% of posts. I would dearly love that to continue; there is a process of conversation underway in the Church, and I want to focus on the other 91% of important issues in theology and ministry. Will we be given any breathing space to do this—or are we now braced for a media onslaught on the same issue?

167 thoughts on “The YouGov poll on same-sex marriage”