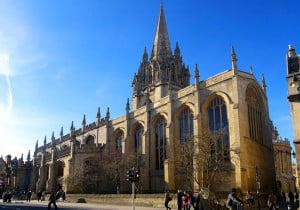 The Westminster Faith Debates are organised by Charles Clarke and Linda Woodhead, and funded by the Arts and Humanities Research Council (AHRC), Economic and Social Research Council (ESRC) and Lancaster University. (A good number of them, oddly enough, take place in Oxford at the University Church.) You might expect them, then, to offer a balanced engagement with issues on the basis of good research—until you looked at the balance of speakers in particular debates.

The last press release, for the debate on unity and diversity in the national church, also suggested something slightly different. It started by citing Justin Welby’s call for unity and careful listening to those with whom we disagree:

In his presidential address to General Synod this week, the Archbishop of Canterbury spoke of divisions within the Anglican Communion, and of the prize of being able to develop unity in diversity. Closer to home, he is supporting ‘facilitated conversations’ in the CofE as a way of healing rifts over the issue of gay marriage. What’s the chance of success?

But the assumption here is that the Archbishop already believes that unity is the most important thing on any issue, and that therefore the best outcome for the debates around sexuality is that we will adopt a diversity of views, but stay together as an institution. In fact, Welby’s comments earlier in the year showed that this was not the case, and he reiterated his concern the impact that any decision in England would have across the Anglican Communion again this week.

The press release goes on to make two interesting comments, arising from research:

When asked where they fall on spectrum from evangelical to catholic, roughly a third of all clergy say they are at the evangelical end…[and] a full 88% of these evangelicals say that same-sex marriage is wrong, compared with just over a third of the rest of the clergy.

It is not clear how accurate these findings are; similar research has previously claimed various things about the views of ‘Anglicans’, but it has subsequently turned out that a good number of these ‘Anglicans’ don’t actually attend church. But if they are close to being right, that is significant. Evangelical churches are, on average, larger than other Anglican congregations, so the proportion of Anglicans attending churches led by self-identifying evangelicals will be a good deal higher than that. Overall, a very significant proportion of those responsible for teaching the faith in local churches continue to be opposed to the Church recognising same-sex marriage.

The press release then goes on to identify an important distinction between men and women on this matter: women appear to be more willing to live with difference.

The typical view of evangelical male clergy is both to oppose gay marriage and not to wish the Church to embrace diverse views. Overall this combination of views is held by about 25% of clergy, the majority of whom are male evangelicals. These are a major block to the Archbishop’s dream of unity in the CofE.

Again, we find the assumption that Justin Welby’s priority is unity above concern for theological clarity. If this were the case, he would have moved a long way from his own evangelical roots, and Andrew Atherstone’s revised biography suggests he has done no such thing. There is also a hint here that a key issue is whether the Church as a whole will fulfil the Archbishop’s goal, suggesting the kind of top-down authority which JustinWelby has stated he does not have and probably would not want.

More concerning, though, is the message weaved into this use of research. It seems clear that these male evangelical clergy are the ‘baddies’ in the story—how unreasonable of them not to be willing to live and let live! After all, who are they to try and tell the rest of the Church what they ought to do? Why can’t we just agree to disagree, take a middle path and be reasonable, as the Church of England has always done in the past?

The reason, of course, is that that is precisely what is at stake. On the question of same-sex marriage, the heart of the question is precisely whether this can be considered one of the adiaphora, a subject on which we can agree to disagree, or whether a change of the Church’s position would go to the heart of Anglican identity by changing its relationship with Scripture as the key source of its theological understanding. And to decide this, we cannot simply take poll after poll, until we see views gradually change into the appropriate majority. We need to engage in the theological, hermeneutical and pastoral issues and (once again) thrash them out.

It also raises questions of what unity is actually about. If we agree about nothing theologically, but happen to remain part of the same administrative structures, what kind of unity is that? Is it really of any value at all?

The task of research, and publicly funded research at that, is to tell us what is—and this can never simply translate into what ought to be, unless (of course) it happens to be overlaid with a particular theological or ideological agenda.

Additional note: Andrew Symes, who participated on the debate itself, records his experience on the Anglican Mainstream website. Even if you read this with a ‘hermeneutic of suspicion’ and are not sympathetic to Andrew’s own position, it doesn’t sound anything like the kind of respectful debate on the issue that it should have been.

76 thoughts on “The state of the (Westminster) debate”