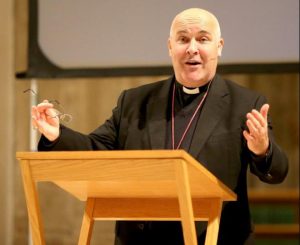 Following the debate in General Synod on the House of Bishop’s report on the Shared Conversations, various bishops have been making statements to their dioceses outlining their reflections on the debate and where we have got to as a Church. Perhaps the most striking was that made by Stephen Cottrell, the Bishop of Chelmsford, in his Presidential Address to Chelmsford Diocesan Synod.

There are some welcome things in this address, not least the focus on the importance of the apostolic faith, and the attention to be given to ecumenical relations as we think about sexuality. But there are also a good number of very surprising things. The first comes in the first substantive paragraph. Reflecting on the role of the episcopate, Bishop Stephen comments:

This seems to me to be unusual language for any Anglican to use. I would agree that apostolic succession should be understood in relation to the faith ‘revealed in Holy Scriptures and set forth in the Catholic Creeds’, especially when we include the word ‘uniquely’ as it is in the Declaration of Assent. It is in this sense that St Paul talks of his apostolic responsibility to ‘pass on to you what was passed on to me’ in relation to the content and truth of the proclamation of the good news (1 Cor 15.1–3).

This means that bishops have a responsibility to be guarantors of ‘the apostolic ministry of Christ’, but neither their existence nor their actual ministry can be the unqualified guarantee of that ministry. The Lambeth Quadrilateral notwithstanding, episcopal ministry is not the esse of the Church of England, even if it might be of the bene esse. And the oath of canonical obedience is in ‘all things lawful’—there is a mutuality of accountability between the episcopate and the presbyterate in keeping faith with the apostolic deposit of truth. Jesus’ prayer was not simply ‘that they may be one’, as is repeatedly and rather oddly claimed; it is that ‘they might be sanctified in the truth; your word is truth’ and in that sanctification ‘they might be one’ so that the world might believe. It is not so much about an absence of schism, but the presence of united cleaving to the truth Jesus has made known.

The second surprising thing in the address (and doubly surprising given the opening comments) is what sounds like the grudging concession to those who want to remain faithful not only to the Church’s historic teaching on sexuality, but what is in fact the Church’s (and the bishops’) stated current understanding:

Many Christians in this diocese were disappointed that the House of Bishops statement did not go further in opening up the possibility of the Church formally blessing same sex unions. I understand this. But I also recognise the principled objection to such change by those who are, after all, only remaining faithful to the Church’s traditional and canonical understanding of marriage and human relationships, a position that is shared by the Roman Catholic and Orthodox Church and by a majority of the Anglican Communion.

If such a position involves ‘remaining faithful’ to current canon law (which Bishop Stephen suggests he does not see changing) and this has continuity not only with past understanding but the current position of the Anglican Communion and our ecumenical partners, I wonder why he does not see his role as teaching into this, being a shepherd of the sheep rather than a referee between conflicting and irreconcilable views. If one of these positions is, as he states, ‘faithful’ to the Church’s teaching, then the other, by definition, is presumably not. (How can you be a ‘faithful Anglican’ whilst denying Anglican teaching…?)

This leads to a third surprising comment. On the one hand, the new teaching document will explore what is possible ‘within current arrangements’, and that prohibits the offering of public prayer which would give the appearance of a blessing of a same-sex sexual relationship. Yet on the other hand, Bishop Stephen cannot see any reason why ‘prayers of thanksgiving for these relationships – perhaps a Eucharist – cannot be offered.’ It seems strange to me that any bishop should feel so relaxed about contradicting the current position of the House of Bishops, without offering any account of this—and why he does notice that it is, in fact, contradictory.

But perhaps the most astonishing and surprising comment comes earlier on. In reflecting on the relationship between sexuality and missional engagement, Bishop Stephen makes this startling claim:

As I have said before, I am not sure the church has ever before had to face the challenge of being seen as immoral by the culture in which it is set.

For some reason, Bishop Stephen sees the issue of the Church’s teaching on sexuality as a unique turning point in relation to culture, as if we have never experienced this sense of being out of step with prevailing morality and criticised, on moral grounds, because of it. I cannot really make sense of this statement, since even a moment’s reflection on some current areas of debate illustrates how implausible this is.

I might not agree with the moral objections to Church teaching in these areas—but I recognise that the case is made in terms of morality. I don’t for one minute underestimate the depth of disagreement and even disgust that many express towards the Church’s teaching on sexuality. But ‘the first time’? Really?

I can only think of two reasons why someone might think that sexuality was unique in making the Church look immoral. Either this person is operating in a Christendom paradigm, where society was essentially aligned with Christian morality, so the role of the Church was simply to articulate the assumed norms of wider society, to which most would naturally assent, or at least recognise the Church as articulating the ‘moral’ position. Or such a person is operating in a position of privilege, where their moral view is expected to be received with authority and acquiescence, and recognised as morally superior to the views of wider society. Both imply a basic lack of awareness of changes in culture and its relation to the Church over the last 50 years.

In fact, belief in the immorality of Christians has marked relations between church and society since the first centuries of the Christian era.

‘As we by our prayers vanquish all demons who stir up war, and lead us to the violation of oaths, and disturb the peace, we in this way are much more helpful to the kings than those who go into the field to fight for them’. (Book 8, ch 73)

On just about every major issue where Christians have taken a different moral line from the wider society in which they sit, they have been seen by that society as ‘immoral’. The notion that we have always been seen as morally superior, but that an immoral society has wickedly and knowingly rejected our clearly moral position, is just that—a notion, and one that can only be sustained by both an ignorance of the past and an extraordinary belief in the uniqueness of the present moment. It was not much more than a decade ago when, in wider society, same-sex marriage was itself seen as sufficiently ‘immoral’ that, should someone who was married petition for a legal recognition of a change of gender, they had first to obtain a divorce!

I would be genuinely interested to know what Bishop Stephen makes of these examples, and why he sees the situation in relation to sexuality as unique and unprecedented.

Bishop Stephen then makes clear what this extraordinary claim leads to:

Nor can we simply ignore the biblical passages that pertain to this debate. They are part of our story and our inheritance. But what we can do is recognise that what we know now about human development and human sexuality requires us to look again at those texts to see what they are actually saying to our situation, for what we know now is not what was known then.

Because of our unique modern situation, and our uniquely superior understanding of human sexuality and anthropology, it seems we must now set aside the clear teaching of both Jesus and Paul (not ‘simply’ of course, but with sophistication!) that marriage is to be between one man and one woman (as a reflection of the Stone Age creation myths found in the first chapters of Genesis), because we now know better. When others have suggested this, I have asked in what other area of life we have similarly set aside New Testament teaching. After all, we are happy to listen to Jesus and Paul on questions of economics, power, justice, peace, reconciliation, conflict resolution and so on. Surely in all these areas we also now ‘know better’ about human nature, understanding, relationships and society? But I have not yet received any answer: it is in the area of sexuality, and sexuality alone, that we need to set aside what Scripture teaches. I wonder why this is?

Bishop Stephen is quite right when he notes the imperative we have to offer good news in the area of sexuality:

Neither can we ignore the culture in which we are set where same-sex relationships and same-sex marriage are not only considered normal, but positively taught and encouraged in many homes and schools as a social good.

But what he singularly fails to do is articulate what the historic teaching of the Church in this area might look like, and instead appears to assume that secular sexual ethics has got it right, and the Church—in its historical connection with the apostolic witness, and its ecumenical connection with Christians around the world—has got it wrong, and along with them, so have both Jesus and Paul.

This is not a model of ‘representing and proclaiming afresh the faith that is revealed in Holy Scriptures and set forth in the Catholic Creeds’ that I find coherent, compelling, attractive or persuasive, and I think we need to do a lot better. It confirms for me that the issue of sexuality is not causing splits and failure in the Church: it is highlighting where those failings have long existed.

159 thoughts on “Sex and morality in Church and society”