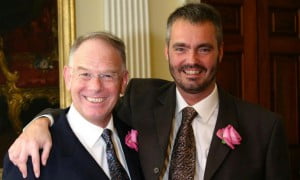 As most of the nationals reported (in fairly short articles), a second clergyman has had permission to officiate refused by the Bishop of Winchester, Tim Dakin, because he has entered a same-sex marriage. As with the previous case, this also involves a Jeremy. (What is it with Jeremys? Is there some nominative determinism at work?!) Jeremy Davies was Precentor at Salisbury Cathedral for more than 20 years (I knew him a little when I was in the diocese) and has been partnered with Simon McEnery, an opera singer, for around 30. They entered a Civil Partnership when these became available; it was on his birthday, and the party which followed the ceremony, and which the then bishop David Stancliffe attended, was said to be in celebration of his birthday rather than the partnership, to save episcopal face (or to add another one, depending on how you look at it). Jeremy retired from his role, and then in 2014 he and Simon married under the new marriage legislation.

The press coverage has been less extensive than of the case of Jeremy Pemberton, and less error-strewn; the sensational language of ‘senior clergyman BANNED‘ is the best that they can do to wring some drama out of it. This is perhaps because there are some important differences between the two cases.

You can listen to the interview with Justin Webb on Radio 4’s Today from yesterday morning, starting 1 hour 23 minutes into the programme. Jeremy’s tone is modest and (to some extent) self-deprecating. When Webb reminds him of the Church’s teaching position, he talks of his own self-understanding, and the qualities of relationship that he has aimed to model. More importantly, when Webb suggests ‘It all makes the Church look a bit silly, doesn’t it?’, Davies first response is ‘No…’ rather than ‘Yes’, and he talks of the Church being ‘on the move’ in this area. The sceptical listener might then ask ‘If the Church has a process, why did you pre-empt it by marrying against the bishops’ explicit teaching’. But I didn’t think the interview was biased in its content, as some have suggested. If there was bias, it was in failing to hear comment from the side of the Bishop of Winchester or the central Church.

(I think at one level Jeremy does less well in his interview on BBC South Today; when challenged about the Bible’s ‘plain teaching’ about homosexuality, he responds with the Bible’s ‘plain teaching’ that if your hand causes you to sin, you should cut it off. To anyone who knows anything about reading texts, this is just silly—but only to anyone who knows anything.)

There are three reasons why something now needs to change, and they all come from rather surprising sources.

The first arises from a quick glance at the 1,728 comments on the Guardian report. I would normally expect these to be of a predictable kind: the Church is neanderthal and needs to get with it, probably be disestablished and preferably be obliterated. But there was a surprisingly persistent thread of comments along the lines of ‘Actually, the Church is not here to mirror society; it has said what it has believed; and if you want to join the ‘club’ then you need to follow the rules.’ Within that there was a frustration less with the decision and more that it has not been implemented consistently:

Absolutely right that he should be refused permission to officiate. What saddens and baffles me is that the refusal isn’t implemented in EVERY diocese. The Church of England’s official position is quite clear. It is not open to debate or variance depending on if a bishop feels like it….

Someone here has to get their act together…Whatever your position on the issue, all this vacillation is doing is hurting people to no real effect.

Do we know why one diocese says nay and another says yeah? What influences one diocese to follow the “Church of England’s position on same sex marriage, as set out in the House of Bishops’ Pastoral Guidance” , and another to feel free to disregard it?

If the action here involves hypocrisy, then the fault lies not with Tim Dakin in Winchester, but with liberal Nick Holtam in Salisbury. At the time of the 2014 Bishops’ statement, Colin Coward of Changing Attitude accused bishops of ‘hypocrisy and dishonesty’. As has been the case for some time, this dishonesty has mostly been on the part of liberal bishops saying one thing but doing another (and those evangelicals who have gone along with it); for the most part, whatever else their faults, evangelicals have been consistent in opposition to same-sex sexual relationships in speech and action.

The second reason why Holtam needs to take action comes from Christina Rees of WATCH, who campaigned for women’s ministry and now wants to see the Church change its teaching on marriage. Although I disagree with her aim, I think she is spot on with her observation on the process. She doesn’t appear to have much sympathy with the ‘sob story’ angle:

When Canon Jeremy Davies married his long term partner Simon McEnery he must have known what he was doing. Neither he, nor anyone else, should really be surprised that he’s been refused permission to take services in one of the two dioceses (an area of church administration under the ward of a bishop and divided into parishes) in which he currently officiates.

She rehearses the reasons for this—that there has been a long succession of discussions, during which the Church has repeatedly stated its theological reasons for its current position. In doing so, she points out the depth of issues that would have to be untangled for the Church to change its position, and the consequences of that in every direction:

Jeremy Davies has also said that the bishops involved in the decision against him are hiding “behind the barricade of canon law”. Thank God for that. Canon law is passed in General Synod – an elected body that functions as the Church of England’s Parliament. The processes may be maddening and seem interminably slow, but it works. If it hadn’t been for canon law, we wouldn’t have the Church’s official and universal acceptance of women’s ordination – something I campaigned for, as chair of WATCH (Women and the Church) for 13 years.

In other words, the piecemeal approach of those who would want to continually test the Church and its bishops with individual cases like this, and see bishops adopting different practices, are leading us to canonical, theological and pastoral anarchy—and that is going to help no-one.

The third reason for action comes from an unexpected corner, and a connection only Tyson Fury would make. As part of revising its safeguarding processes, last July General Synod passed Draft Amending Canon 34 which revises Canon B 34 and C 8—essentially requiring much greater consistency and uniformity over who is allowed to minister where. In order to ensure proper safeguards are in place, those inviting someone from another diocese to minister must be sure that that person is ‘in good standing’, and the bishop in the diocese visited should be informed. So, for altogether unconnected reasons, it will simply be impossible for bishops to decide independently of one another whether or not a clergy person is ‘in good standing’.

This implies that these individual test cases which probe the bishops’ resolve will achieve nothing in the short term, and might even make the consistency of current practice clearer to those who are inclined to be sympathetic to it. It also implies that bishops are going to have to act more consistently with one another, in line with stated policy, even if individual bishops didn’t really agree with that policy when it was formulated.

I wonder whether this is also the moment for the Church to get its PR act together a little more convincingly on this issue. The one thing that was absent from all this media coverage was a live voice speaking on behalf of Tim Dakin or the Church’s position. All it needed to say was ‘We are not here simply to mirror society; we are thinking and listening; in the meantime we do have a position, and we expect clergy to adhere to that.’ In the light of the Equality Commission’s statement on the cinema and the Lord’s Prayer, defending the Church and criticising DCM, there seems to be a significant (growing?) number who don’t think that is unreasonable.

305 thoughts on “Same-sex marriage and the second Jeremy”