In a guest post, Andrew Goddard reflects on the issues for a possible Christian ethic of same-sex marriage. 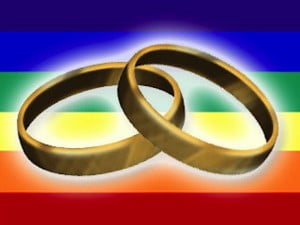 Last week’s Supreme Court judgment in the US, following swiftly after the Irish referendum, has made the legalisation of same-sex marriage major news again. As in England, the Christian voices have been divided. There are those, including me, who regret this and are aware of the major challenges they now face in bearing witness to marriage as they understand it. There are also Christians who welcome the extension of the good of marriage to same-sex couples and see it as simply sharing it with gay and lesbian people. Surprisingly little attention has been given as to how the latter group should now develop their sexual ethic given same-sex couples can legally marry. Are they simply extending the traditional teaching about sex and marriage to same-sex couples and what would that look like? Or are they – as seems to be the case with most secular supporters – simply welcoming the rectifying of an injustice which now gives gay and lesbian couples the same options in relation to structuring their relationships as straight couples have had for some time?

One of the criticisms often made of “revisionist” groups is their lack of a clear, consistent and widely-accepted ethic for same-sex couples. Various elements have contributed to this including perhaps a reticence to appear critical of aspects of gay culture and so perpetuate a sense that Christians were against gay and lesbian people. But most significantly there was the lack until very recently of the institution of marriage, which lies at the heart of a Christian sexual ethic, as a social and legal reality for structuring such an ethic. This is no longer the case so what might a Christian ethic of “equal marriage” look like? How will Christians, particularly those identifying as evangelical, who support the new form of marriage articulate such an ethic? How will they encourage people to live it? How will they commend it to the wider gay and lesbian world, parts of which have supported the changes to marriage law in theory as a matter of justice but are less than fully enthusiastic about embracing marriage in practice or viewing it as making a moral demand on their own lives?

This is clearly a massive area but five key areas merit some sort of attention – four traditionally understood as matters where the Christian vision provides moral teaching applicable for all people, the final being focussed on Christians.

First, the Christian tradition has said that sex (it has then argued about just what behaviour this includes) should be for marriage and so pre-marital sex is a sin, sexual immorality – a form of porneia (“fornication” in traditional language) to use the language of the New Testament vice lists. As a result, pre-marital cohabitation has also been viewed as wrong by Christians and was relatively uncommon in British society until the 1980s. When marriage was not an option for same-sex couples “pre-marital sex” was clearly meaningless for them. If they did not believe same-sex sexual behaviour was wrong they had to discern for themselves when it was right and could not do so by reference to marriage for no such institution existed. Now that it does exist, will we see Christians who support same-sex marriage also supporting the teaching that “living together” outside marriage and sex before marriage should not happen among same-sex couples? Will those who support same-sex marriage among the clergy be quite clear that the church must move to a position not only where clergy are permitted to marry a same-sex partner but they are required, whatever their sexuality, to legally marry before starting a sexual relationship or living together as a couple?

Second, Christians have also been very clear that extra-marital sex is wrong – the sin of adultery. One of the peculiarities of the legislation introducing same-sex marriage in England (I am not clear how this is working out in other jurisdictions) is that a sexual relationship with someone of the same sex other than one’s spouse is not classed as adultery (which only describes heterosexual unfaithfulness) and a ground for divorce. Are Christians who support the legislation clear that in the eyes of God, even if not in the eyes of the law, any sexual relationship with someone other than one’s spouse is adultery and this needs to be treated as seriously within a same-sex marriage as in traditional marriage? It is far from obvious that this is the universal or even the majority view given that many, particularly male, same-sex Christian couples have in the past seen this as a matter for the couple to determine themselves and, either openly or tacitly, allowed sexual freedom outside the relationship as advocated by the Reverend Malcolm Johnson for example. It is likely that such “open marriages” will be even more common among gay married couples generally than among gay Christian married couples and among straight married couples (were such a pattern is still relatively rare). There is a major questions as to how to challenge this and how to support exclusivity in marriage is an important pastoral and missional issue for Christians who welcome same-sex marriage.

Third, a similar set of questions arise in relation to permanence. The church has for centuries accepted some marriages fail and permitted divorce in certain situations and in recent decades we have seen a sharp and damaging rise in marriage breakup both in society and the church. Nevertheless, there is a very strong tradition that marriages should be – and can be – lifelong, that they must be entered with that intention and commitment, and that divorce is an extreme last resort which should be avoided if at all possible, even in the face of marital difficulties. For centuries marriage between a man and a woman was very difficult to end legally and, despite the rise in divorce, there is still a widespread cultural expectation that marriage should be for life. In contrast, same-sex marriage has arisen only in our context of marriage (and wider relationship) breakdown. Do those Christians who support it have as strong a belief in its permanence? What – given that the church has often failed badly here in relation to opposite-sex marriage – can they do to help marriages be lifelong?

Fourth, marriage has traditionally been closely tied to procreation. This clearly is not the case with same-sex couples whose marriage is incapable of producing new life, but many same-sex couples want to have children. Elton John and David Furnish have two sons and recently married Stephen Fry, asked if he would like to bring up children, replied “We sort of talk about it and I suddenly think, ‘Oh my goodness I’m such an age now’, but actually that’s rather good, but we better get on with it if we do.” Should we continue to expect marriage to be tied to children and family for same-sex spouses or should Christians, even if supporting same-sex marriage, continue to hold to male-female parenting as the moral norm and so discourage this? Is it purely a matter of personal choice for each couple? If they wish to have children should they be encouraged to adopt or to use some form of reproductive technology in order to conceive? Many Christians have raised significant questions about both using donor gametes or surrogacy for opposite-sex couples – do the same questions apply in relation to same-sex marriages and are there further issues (beyond those raised by adoption) when creating a child to be brought up by two people of the same sex rather than the opposite sex?

Given the new and rapidly changing situation we are in, it would be unreasonable to expect immediate agreed-upon answers to all these questions from Christian supporters of “equal marriage”. It would, however, be good to see them being seriously and openly discussed and reasons being given if the traditional ethic must adapt for same-sex marriages.

While some questions are complex, there are steps that one would hope could be taken without too much controversy. For example, the Lesbian and Gay Christian Movement’s Statement of Conviction is famously non-prescriptive. In relation to sexual behaviour it simply says, “it is entirely compatible with the Christian faith not only to love another person of the same sex but also to express that love fully in a personal sexual relationship”. LGCM’s history makes clear that this reflects the power of the gay liberation element in its origins and that, as one participant wrote, “the main problem in the Statement of Conviction debate revolved round the point at which it was proper to leap into bed with one’s friend” (Gill (ed), The Lesbian and Gay Christian Movement (Cassell 1998), pp. 12-13). Why not now amend that statement by replacing “in a personal sexual relationship” with “in marriage”? Why don’t other Christian groups supporting same-sex marriage adopt a similar statement? If that cannot be easily done it suggests that not only has marriage been redefined but the Christian understanding of the relationship between sex and marriage has also been rejected.

If same-sex marriage is accepted by Christians then any account of chastity and sexual holiness for gay and lesbian people needs to relate to marriage. If the tradition’s account of how to do this in relation to opposite-sex couples is not simply followed then we are faced with a major problem: either we do not have “equal marriage” but rather one marital and sexual ethic for gay people and one for straight people or we do have “equal marriage” and the inclusion of same-sex couples within marriage will therefore entail a reconfiguring of the tradition’s marital and sexual ethic much more widely.

57 thoughts on ““Equal marriage”: Is There A New Christian Ethic for Sex and Marriage?”