This guest post by Andrew Goddard assesses an important contribution to the debate about same-sex unions. 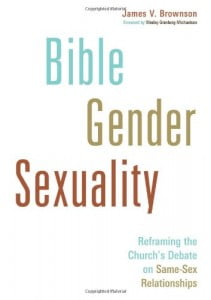 The General Synod’s decision to approve women bishops was immediately followed by questions as to whether the church would now change its teaching and policies in relation to LGBTI people. The question is an obvious one, particularly if both issues are understood primarily through the categories of inclusion or rights or needing to be in touch with our culture. If, however, biblical teaching is primary then the two issues are not so obviously connected and each needs to be considered in its own right in the light of Scripture.

Most (but not all) evangelicals have over recent decades become convinced that Scripture witnesses to God calling men and women to all forms of ministry and so concluded that the church must remove its traditional but unbiblical prohibitions. Most (but not all) evangelicals however have not been convinced that Scripture witnesses to same-sex relationships being something the church can affirm and bless, perhaps as a form of marriage.

This new book by James V. Brownson, New Testament Professor at Western Theological Seminary, Michigan and a minister of the Reformed Church in America, is the most thorough challenge yet to that view, making a creative and significant contribution to this debate. Many of his ideas are already being circulated through the work of Matthew Vines.

A challenge to traditionalists and to revisionists

In “reframing the church’s debate on same-sex relationships”, Brownson addresses both traditionalists and revisionists. To the latter he effectively says, “I basically agree with your conclusions but you must do more with the Bible than silence its negative texts about homosexuality and then appeal to love or justice”. To the former he says, “I basically agree that we need a biblical sexual ethic but your category of gender complementarity is unbiblical and once you replace it with more genuinely biblical categories and read the texts carefully you will see that faithful same-sex unions are not being condemned”. He offers four elements of “a broad cross-cultural vision for the center of Christian sexual ethics” (patriarchy, one flesh, procreation and celibacy) before tackling the key text of Romans 1 and exploring four more themes which he sees as marking the boundaries in Paul’s sexual ethic – lust and desire, purity and impurity, honour and shame and nature. Does he succeed?

His reading presents some important challenges to the traditionalist case which need to be heard and require a response. Many will like me wish – for personal, pastoral or political reasons – they could sign up to his claims and some will grab them as offering a biblical basis for what they already believe. My own view, however, is that the book’s exegetical, hermeneutical and theological weaknesses far outweigh its strengths.

Brownson’s central attack on gender complementarity focuses on one particular form of this and one particular reading of Genesis 2 (by Robert Gagnon), a reading which is probably a minority reading among traditionalists. Certainly, along with Davidson (a traditionalist whose major study on sexuality in the Old Testament is surprisingly never cited) I would agree with much of Brownson’s reading of Genesis 2. In addition, Brownson offers no alternative account of the biblical, theological and ethical significance of being made male and female even though he wishes to stress the importance of complementarity generally and some of his own biblical categories (notably procreation and patriarchy) only work with some such account of this “combination of similarity and difference” (17) within humanity. This lack of a biblical anthropology in relation to sexual differentiation connects to a wider and even more serious concern: that he downplays the goodness and significance of our bodies and of creation, often by appeal to new creation.

Most of the book and its argument focuses on Scripture but at key points he relies on judgments beyond his own sphere of expertise as a biblical scholar. His claims about sexual orientation are crucial in a number of arguments (e.g. relating to Paul’s limited understanding and the new situation we now face or the alleged imposition of celibacy in a traditionalist view). Providing limited engagement with the literature, he works with crude binary categories (homosexual or heterosexual), a selective and uncritical interpretation of the range of experiences of sexual attraction, a strong sense of the fixed nature of orientation and no engagement with social constructionist accounts of sexuality or the testimonies of same-sex attracted Christians living out traditional teaching. Were different conclusions to be reached in any of these areas some of his arguments would be significantly weakened.

Turning to moral theology, his discussion of procreation raises the important challenge of non-procreative or infertile marriages but approaches the biblical material through the frame of a caricature of different Christian perspectives. He thus shows the allegedly Catholic view that procreation is the essence of marriage is unbiblical and instead favours the allegedly Protestant view that relationality is the essence of marriage and thus in principle extendable to same-sex couples. A better understanding of the tradition and the moral arguments again undermines his strongest claims here.

In terms of biblical exegesis and hermeneutics Brownson’s strength is his concern to read not just a few texts but the whole Scripture canonically and contextually and to ask why Scripture says certain things, what he calls the underlying “moral logic”. However, more attention needs to be given to his method in discerning this logic and some of his specific claims about it in relation to sexual ethics. Having rejected gender complementarity as not an explicit concern in the texts and so not a biblical moral logic he then explains terms in the text (such as honour or nature) in ways which import the details of the proposed moral logic from the cultural context (for example homosexuality as feminising the male) with limited study of how the terms might be understood in a different light if interpreted canonically and theologically. This then allows him to claim the logic is culture-specific and so does not require us to follow it through and accept the biblical author’s conclusions. Is this not replacing the authority of the canonical text with a reconstructed moral logic which is not in the text but assumes biblical writers simply followed their culture’s moral reasoning?

Even where there is more of a canonical than contextual argument to challenge the traditional reading his conclusions are in need of stronger justification. In relation to purity, for example, he claims a threefold canonical trajectory which, while having elements of truth, fails to do justice to the New Testament’s continued concerns with the external (particularly what we do with our bodies), the need for separateness from sin, and the place of creation order.

On specific texts, there are a number of surprising judgments or omissions. To signal a selection:

“One flesh” and kinship

The most important element in his development of a new biblical sexual ethic is his appeal to “one flesh” as a kinship bond and the central category for sexual relationships. This keeps a strong covenantal ethic and critiques promiscuity but in wishing to create space for a sexual kinship bond other than marriage between a man and a woman he is proposing something which sits very uneasily with the biblical vision. Scripturally, sex is generally excluded from any kinship bond and to be contained within marriage. Acknowledging that “Scripture assumes that this one-flesh bond only takes place between a man and woman” he claims that “what is normal in the biblical witness may not necessarily be normative in different cultural settings that are not envisioned by the biblical writers” (109) but at no point does he explain the grounds for saying something that is normal – in fact consistent and universal – in Scripture need not be normative and required in a particular culture.

This leads us back to where we began. In his discussion of patriarchy Brownson writes of “two streams” in Scripture’s teaching on men and women – the patriarchal and egalitarian. In other words, Scripture requires us to deal with tensions within the canon. How do we, for example, relate the texts limiting women with the examples of women in leadership? Different answers give different approaches. In relation to same-sex relationships however there is no such tension or ambiguity within biblical revelation – the voice is consistent and coherent across the canon. That does not mean there are no exegetical or hermeneutical challenges and it certainly does not mean that Scripture clearly answers every personal or pastoral or missional question we face today in our culture. Brownson’s work helpfully challenges traditionalists to recognise and face difficulties of interpretation and application we can sometimes avoid. To be persuasive, however, in arguing for an alternative “biblical” sexual ethic that can embrace same-sex unions, Brownson needs to address a significant number of serious weaknesses in his handling of specific texts and other elements in his argument for his proposed alternative vision. In particular, he, like all revisionists, needs to offer not just a critique of gender complementarity but his own alternative constructive account of the mystery and significance of humans being made by God, in his image, as bodily creatures, male and female.

Those interested in a much more detailed account and an engagement with the book’s central arguments, exploring the themes noted here and others, can download my paper available as a free PDF from the KLICE website.  This, in addition to offering a short summary of the book and an appendix summarising each of my critiques, covers the following areas: