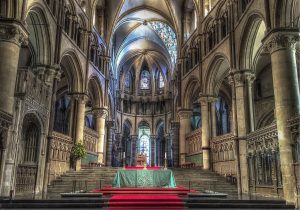 Last December, the House of Bishops issued guidance on the use of the liturgy for Reaffirmation of Baptismal Faith in order to ‘mark gender transition’ in a ‘celebratory’ way. I wrote then identifying a wide range of problems that it raised in relation to the use of liturgy and scripture, the lack of evidence of any theological thinking, and the failure to take into account some key pastoral realities or the debate in wider society around the issue. A subsequent statement was issued but addressed none of these major issues.

Because of this lack of adequate response, a group of people from across the traditions of the Church have written an open letter to the House of Bishops, asking them to ‘revise, postpone or withdraw this guidance until all these questions are properly addressed’. You can read the letter here, along with the more than 1,700 names of those who have signed this (and the text is also reproduced below). The letter has now been publicised in the national media, and is sure to attract more signatures—if you share these concerns, do add your name too. I commented to Christian Today:

This is an area of debate that people are very cautious about commenting on. The fact that so many, from a wide range of traditions in the Church, have been prepared to ‘put their heads above the parapet’ is an indication of the strength of concern expressed here.

‘The letter has been signed by 800 clergy, including area deans, archdeacons and retired bishops, as well as 700 lay members, including members of Synod, Church wardens and PCC members. But the most important thing here is not simply the numbers, but the fact that the letter highlights really important doctrinal, liturgy and pastoral issues that have not been adequately addressed. The bishops really need to think again and consider these things properly.’

David Baker adds his view that, if the bishops value listening so highly, they need to listen and respond to these concerns:

No: we ask to be heard because we believe the detailed theological questions we raise merit close examination. So we ask not to be dismissed with soundbites (‘this is not compulsory’) nor with platitudes (‘this does not change doctrine’) – for we have heard the soundbites and the platitudes, truly we have, and yet we still come to the table now with our voices, our questions, and the detail of the issues we raise. And we will keep coming until the details are answered.

So respectfully, and from our hearts, we ask you to listen. To engage, point by point, in detail, with the matters being raised. To listen from the heart, with minds engaged, and in so doing to hear the questions well. And as you engage with us, listen to us, pray with us, we assure you of our prayers. We are fellow pilgrims together, walking as part of his church, under the authority of his ever-speaking Word. For it is his voice and his voice alone that counts – not ours.

Here is the full text of the open letter for ease of reference. Add your name at the letter’s web page.

Gender dysphoria is an emotionally painful experience that requires understanding, support and compassion. Because it has affected a very small proportion of people, evidence from the medical and social sciences is often conflicting and of poor quality. Although gender dysphoria has been recognized for many decades, in recent years controversial new theories about the relationship between biological sex and the social meaning of gender have been linked to gender dysphoria. These ideas continue to be widely contested, with well intentioned and thoughtful people on all sides of the debate.

The many ordinary parents and teachers who now express concern about these new theories do not wish to cause harm to the tiny number of children afflicted by gender dysphoria; but neither do they want to harm the potentially larger numbers of children by prematurely imposing untried and untested ideas on young children. Given the many instances in the history of medicine where under-researched interventions, introduced prematurely, have caused more harm than good, our guiding principle should be ‘first do no harm’.

This is the wider medical, social and political debate into which the House of Bishops have introduced their brief ‘Guidance for gender transition services’. The document is undoubtedly well intentioned but lacks the serious theological analysis required to address the philosophical, anthropological and social issues in play in public discourse.

We, the undersigned, are unreservedly committed to welcoming everyone to our churches and communities of faith, so that all might hear and be invited to respond to the good news of repentance and faith in Jesus Christ. But we do not believe that the Guidance is the right way to do this, since it raises some significant issues for the Church’s belief and practice.

In the light of these significant concerns, we ask that the House of Bishops revise, postpone or withdraw this guidance until all these questions are properly addressed. We assure the House of our prayers as they consider the best way forward.

Add your own name here.

255 thoughts on “A plea to the bishops on trans guidance: please listen and respond”