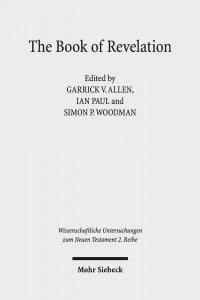 For ten years, from 2005 to 2014, I chaired the Revelation seminar at the annual British New Testament Conference. During that time, we quickly doubled the number of papers presented at each conference from three to six, so that in the ten years we heard more than 50 papers. They ranged from initial thoughts from those early in their PhD research to the mature reflections of established scholars, and a couple of years ago I thought it would be good to collect the best of these into a volume. (Steve Moyise, who established the group and led it for its first seven years, had done something similar, and this produced the volume Studies in the Book of Revelation to which I contributed.) The end result is out next month, edited with Garrick Allen and Simon Woodman, and published by Mohr Siebeck in the prestigious WUNT II series.

The volume indicates the continued lively interest in Revelation in British research and study, but also the kinds of questions—some new, some long-established—that continue to be asked about the text. These include:

These are not the only questions to ask, but they are ones of abiding significance and fascination. I give the full contents list below. The book is completed with a lively response from Steve Moyise. He concludes:

I only have space to comment on a couple of points of interest in these engaging and well-researched essays. The first is the emphasis on visualisation, not only through Christopher Rowland’s discussion of Blake’s artwork but also his discussion of Mary Carruthers, who argues that the “monastic practice of meditation notably involved making mental images or cognitive ‘pictures’ for thinking and composing.” It made me wonder if I was wrong to suggest that Allen’s proposal concerning the consonantal Hebrew text turns John into a scribe or rabbi instead of a visionary prophet. Perhaps we should view it more as a visual activity, where the actual shapes and patterns of the Hebrew text formed new patterns in his altered state of consciousness. There is more to the word “see” than meets the eye!

Second, modern scholars try to apply certain criteria to decide if an allusion or echo is intended but they are at a considerable disadvantage to those who throughout their lives have used the biblical texts for prayer, singing, discussion, preaching, meditation and even as a source of visionary experience. Some of their suggestions may seem to have little foundation in the text but this might be because the connections are now hidden from us. The starting point for many studies today is the list of parallels in the margins of Nestle-Aland but a reception history of the passage could usefully supplement this.

Lastly, reception history forces us to ask the question: What does it mean to say that a book like Revelation is inspired? Is it saying something about the origins of the book, such as whether John was genuinely in touch with God or merely suffering from an over-active imagination? Is it offering some sort of guarantee for the final product, for example, that it is free from the vindictiveness or gender stereotyping that we see in similar works? Or is it saying something about the effects of the book, that it can inspire readers and hearers to acts of courage and self-giving? Some readers of this collection may have definite views on this but questions can be asked of all three. Do we really want to maintain a dichotomy between inspiration and imagination? Can the same words and sentiments be free from vindictiveness in one writing (Revelation) but not in another (1 Enoch)? Has not the book been used to justify violence and bigotry as much as it has inspired courage and self-giving? When I began my doctoral studies on Revelation in 1987, someone said to me that the value of focusing on Revelation is that all of the hermeneutical issues raised by the New Testament are present in Revelation – only more so! It is perhaps why the book remains endlessly fascinating, as this fine collection of essays demonstrates.

His final comment exactly matches my reasons for doing my own PhD on Revelation. At £70 or so when published, this book might not be first on your Christmas list—but do track it down in a library near you. And I will continue to write here on some of the issues that it raises.

Garrick V. Allen: Reusing Scripture in the Book of Revelation: Techniques of Reuse and Habits of Reading

Ian Paul: Source, Structure, and Composition in the Book of Revelation

Richard Bauckham: Judgment in the Book of Revelation

Sarah Underwood Dixon: ‘The Testimony of Jesus’ in Light of Internal Self-References in the books of Daniel and 1 Enoch

W. Gordon Campbell: Facing Fire and Fury: One Reading of Revelation’s Violence in the Context of Recent Interpretation

Simon P. Woodman: Fire from Heaven: Divine Judgment in the Book of Revelation

Paul Middleton: Male Virgins, Male Martyrs, Male Brides: A Reconsideration of the 144,000 ‘who have not dirtied themselves with women’ (Revelation 14.4)

Christopher Rowland: British Interpretation of the Apocalypse: A Historical Perspective

Ian Boxall: The Mighty Angel with the Little Scroll: British Perspective on the Reception History of Revelation 10

Jonathan Downing: The Women Clothed in the Sun: The Reception of Revelation 12 among Female British Prophets 1780–1814

Steve Moyise: A Response to Currents in British Research on the Apocalypse

8 thoughts on “The Book of Revelation in British Scholarship”