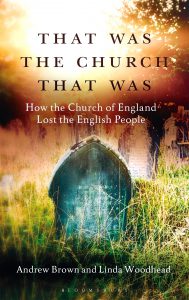 In the summer, and after a year’s delay, Bloomsbury published That Was the Church That Was by Andrew Brown and Linda Woodhead. Woodhead is professor of sociology of religion at the University of Lancaster, and Brown has been a religious correspondent for a national newspaper for many years. So you might expect them both to know what they are talking about when it comes to the Church of England. But the review by Edward Lucas in The Times sets out how much an explanation is needed of recent decline in church attendance—and how signally this book fails to offer it:

It deserves a definitive book, explaining how a mighty, self-confident and global institution, with centuries-old roots and run by kind, intelligent and hard-working people, was shunted to the sidelines of national life in less than a generation. Andrew Brown and Linda Woodhead have failed to do that. Despite flashes of insight and some vivid writing, their book is lazy, spiteful and meandering.

I was keen to read the book for myself to see whether this withering assessment was deserved, or whether it reflected the interests and concerns of the reviewer. Sadly it was the former.

The book starts with a personal and anecdotal account of a meeting of bishops at St George’s, Windsor in 1986. The reader is offered the hope that this anecdote will form a window into some serious insight into the situation of the Church at that time, and that the well-observed pen portraits about the bearing and attire of the main actors will lead into an assessment of their deeper qualities. But here, and throughout the book, it feels as though the clever and the superficial comments are as far as it goes. Most Christians (for Brown) were either ‘sinister or ludicrous’, and these characters do not fare much better. David Jenkins, then Bishop of Durham, was a man ‘intoxicated with his own cleverness’, and John Habgood, Archbishop of York, was ‘vague with precision and subtlety.’ Alongside this, the opening chapter begins a long process of inaccuracy and failure to understand; General Synod ‘sets no budgets’ claims Brown, omitting reference to the major votes on finance that happen annually, but allows clergy to set ‘generous remuneration’, an odd description of pay which remains below that of a newly qualified teacher.

The second chapter offers a partially sympathetic account of life at Ripon College, Cuddesdon, when Linda was a tutor. In this chapter we are introduced to the general cynicism about the clergy (who ‘enjoy eating [their] own cake whilst looking down on other cake-eaters’) mixed with parodic and simplistic caricatures of other theological traditions—mostly evangelicals. Her account of reviewing students as ‘gossip with intent’ illustrates more than anything how inappropriate it is to appoint a new Cambridge graduate, with neither a research degree nor any ministry experience, as a lecturer in a theological college. Another feature introduced here is the contradiction between one part of the book and another, possibly a result of poorly planned collaboration: Cuddesdon is mocked for its lack of self-analysis and inability to innovate, whilst a few chapters on, those who do both are dismissed as being captivated by ‘management voodoo.’

Chapter 3, on ‘Gays and Evangelicals’, displays some of the most egregious errors in the book. John Stott is described as a ‘Calvinist’, which suggests a manifest ignorance of Stott, Calvinism or both. Wild assertions pepper the narrative (‘evangelicals are disproportionately likely to be gay’) set within a genuinely poor understanding of evangelical theology, which is depicted as at once monolithic and constantly at war with itself, and the cause of all the problems of the C of E despite being frustratingly marginalized. The oddest part of this chapter is the sudden turn from Stott to an anonymous book about the experience of being gay and evangelical, The Returns of Love, and most readers must wonder about the connection. I know from a long phone conversation with Andrew Brown that he believed Stott was the author (he wasn’t) and I strongly suspect that this claim is what caused the libel case which led to the first edition being pulped, even though Brown denies this.

(I have recently seen extracts from the pulped first edition, and it contains some truly eye-watering comments as part of what reads as a prurient exploration of Stott’s supposed inner agonies about his own sexuality. I think Brown and Woodhead were saved from an even worse fate by this not seeing the light of day.)

Chapter 4 offers a ‘brief theory of religious decline’ which turns out to be an odd mix of helpful description with a kind of ideological fundamentalism. There is a recognition that the main reason for decline in church attendance has been external rather than internal—huge cultural changes, not least around the Thatcherite embracing of neo-liberalism and the individualism that accompanied it. But immediately the real problem is failure of the leadership. And what did the leadership fail to do? To ‘engage’ with the changes, rather than critique them, which appears to mean simply changing what the Church believes to fit wider culture. Description becomes prescription; because the C of E was a ‘societal’ church and clergy were no different from doctors or squires or milkmen, then for ‘evangelicals’ with their ‘Calvinist’ concern to stand against corruption was a failure to understand what the Church is for. (Once again, there is an odd identification of evangelicals with the overall leadership of the Church). Historically, the Church has ‘largely been unconcerned with corruption, and open to everyone’, something you could only believe if you had never opened up the BCP.

Chapter 5 explores the issue of women’s ordination. It includes an interesting and perceptive analysis of the role of women in faith, and some lyrical evocation of a bygone age of social religion, but this is mixed with serious omissions and unresolved contradictions. At the top of p 78, John Stott (the evangelical) is an uncomprehending villain because of this theological outlook; at the bottom of the same page Donald Coggan (the evangelical) is a heroic spokesman for the cause. Most extraordinary is the omission of the 1976 Synod motion which stated that ‘there is no theological objection to the ordination of women’; to omit this lynchpin of the process is an error of both writing and editing. The 1985 decision to ordain women as deacons was not (as is claimed) an ‘inadvertent’ step towards ordination to other orders, but a conscious move towards it. At least the chapter does note the key role of George Carey (hero here, villain two pages on) and the problematic compromise of the Act of Synod.

Chapter 6 takes the gloves off for a sustained character assassination of George Carey. It accurately charts the snobbishness and sneering of criticism at the time, then cheerfully adds to it. The facts are patchy; there is no mention that Carey actually led a church (why would that matter for an archbishop?!), or that he taught at St John’s, Nottingham, since whether he knew how to drink sherry seems more important. The Decade of Evangelism is dismissed in the (anonymised) account of the late (and much loved) Martin Cavender visiting Woodhead’s parish, where ‘he tried to convince a surprised congregation about the importance of mission by recounting a set of anecdotes about how his life had been changed by Jesus.’ How intensely distasteful! In the middle of this chapter there is one of what Lucas calls ‘flashes of insight’: pp 96 to 100 offer the best short overview of the different structures of the Church and how they are related that I have read—which highlights one of the key challenges to change in the Church. But there is soon a return to error; it is simply not true that Synod kept voting through over-generous stipends and benefits for clergy. And the contradictions continue: Carey was captivated by ‘management voodoo’ when he should really have been considering ‘cutting costs, entrepreneurial spirit, attentiveness to the views of customers [!] and performance review’, phrases I think you could find in any management voodoo handbook.

Chapter 7 feels like the most cynical, offering a mixture of clever writing and misunderstanding about the charismatic renewal movement, including a character assassination of Sandy Millar and HTB. Here, David Watson is known for healing miracles (rather than evangelism); the BCP is ‘cool and static’; Billy Graham had an impact, but not because he made any converts. The charismatic movement overall was mostly about techniques of manipulation, and Millar himself is ‘shrewd, slippery and polite’. The fact that HTB led to church growth was unremarkable (and apparently either unimportant or regretable), since these things often happen but are impossible to sustain in the next generation (is that what has happened?). The impact of the Holy Spirit is to ‘puree the intellect’ until charismatics ‘attain the happy blank credulity of acid casualties’. Any interesting insights are lost here in (probably Brown’s) delight in his own clever wordsmithing.

After a review of global Anglicanism in chapter 8, chapter 9 focuses on the failures of Rowan Williams as archbishop. Central to this is a forensic analysis of his betrayal of his own beliefs about sexuality, and its outworking in his betrayal of Jeffrey John and John’s non-appointment as Bishop of Reading. If Carey’s failure was to take management seriously, William’s failure was not to take management seriously enough. (He once said to me: ‘Even my best friend wouldn’t claim I was good at prioritising’. It is fascinating though that Williams is unstinting in his praise for Justin Welby’s ability to manage, and reciprocally Welby is unstinting in his praise for William’s deep theological thinking. They’d make a good partnership.)

The last two chapters draw together some ideas and reflections of the authors, and include a brief sketch of Justin Welby. But what continues here is the odd mixture of anecdote, cynicism, wistfulness and hopeless inaccuracy. On p 208, Coventry Cathedral has become part of the HTB network. On p 218, current approaches fail to take into account that young people are ‘ceasing to follow their parents into the pew’ (best not mention Soul Survivor, Messy Church, and the explosion of youth ministry then). On p 221, the Church must ‘somehow recover the exhuberant incoherence of the nineteenth and early twentieth century (best not mention either Victorian evangelicalism nor the profoundly theological Oxford movement then, both of which contributed to the renewal of the Victorian Church). The vision appears to be of the Church becoming like the National Trust: maintain the buildings and the staff as monuments to former grandeur, but let’s not worry too much about actual attendance and congregations or discipleship, and for heaven’s sake don’t mention theology.

It has left me wondering why anyone would write such a book or bother to publish it. Perhaps a central aim is to trash the reputation of some key figures with whom the authors are acquainted. I think the book succeeds in that, at least in part. But I cannot help feeling that the reputations mostly trashed by this book are not the ones named in the pages, but the ones named on the cover.

56 thoughts on “Is Church decline the fault of poor leadership?”