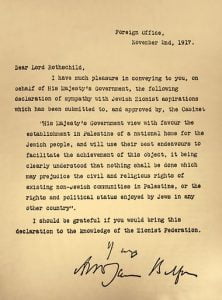 This week marks the 100th anniversary of the Balfour Declaration which paved the way for the establishment of the modern State of Israel 30 years later. The seemingly intractable controversy created by Balfour was summed up by the Hungarian-born Jewish writer Arthur Koestler, who quipped, “one nation solemnly promised to a second nation the country of a third”. The Declaration is often thought to be the product of a relatively modern movement for the physical restoration of Jews to a geographical homeland—but in fact British welcome and support for Jewish people goes a long way back into a very mixed history.

The latest Grove Ethics book, British Christian History and the Jewish People by James Patrick, charts this controversial (and controverted) history in unusual detail, and in doing so unearths some remarkable aspects of Britain’s relationship with Jewish people. British affection for the Jews is buried deep within some key moments of our history.

Christianity is pervasive in the British Isles, long thought to have been introduced by first-generation followers of Jesus—fellow Jews—as early as the first century AD, apparently attested by Eusebius (Dem Ev III.5.112). In any case, by AD 200 Tertullian could refer to ‘the haunts of the Britons, inaccessible to the Romans but subjugated to Christ’ (Adv Jud 7.4)…

In the late 800s, King Alfred the Great first unified Anglo-Saxon tribes into the nation of England, and this new national self-identity was inspired by Israel’s tribes whom Moses united into one nation. Alfred was a lover of learning, credited in later centuries with founding the first schools in Oxford which subsequently developed into the university. He taught himself Latin in order to translate important Christian texts into Old English, and even began his royal English law code, called Alfred’s Dooms (the foundation for British common law), with translations of Moses’ laws from Exodus (20.1–17; 21.1–23.9, 13). Alfred justifies this reapplication to Christian England by citing Jesus’ affrmation of the ongoing value of Israel’s law (ie Matt 5.17–19). He then traces the connection to the Gentiles by translating in full the legal ruling of the Council at Jerusalem (Acts 15.23–29), issued by apostles of Jesus to ‘heathen nations.’ His ‘English race’ is thus positioned as one among many who had received the ‘law of Christ’ (the Golden Rule is added from Luke 6.31 in its negative form). There is no hint of supersessionism here, but rather an illustration of the ancient prophecy that ‘the law will go forth from Zion…and he will make decisions for strong nations far away’ (Micah 4.2–3).

Having outlined a general sense of solidarity of British Christians with Jewish perspectives, James Patrick then explores the reception of actual Jewish communities following the Norman Conquest of 1066.

Christians had adopted for themselves the Old Testament prohibition against lending money with interest. Jews, on the other hand, were denied participation in trade guilds on religious grounds, and were therefore effectively barred from most professions. Their limited options led them into banking and consequently some of them became quite wealthy. The Norman kings gave direct royal protection to the Jewish community, which not only made them and their possessions the property of the king, but also isolated them from the feudal fabric of life in which everyone else found their proper place. Jewish moneylending became a personal source of finance for the king, enabling castle building and military spending, and freeing him from over-reliance on his powerful barons and retainers. The Jewish community, living amongst their Christian neighbours in roughly two dozen towns throughout the country, provided important nancial services to the local economy. Yet their unique status and privileges were often resented by their neighbours, and sometimes put them in danger of violence from barons in their debt.

Nevertheless, the first hundred years of their presence in England was generally peaceful. Jewish financiers kept business deeds in cathedral treasuries, enjoyed excellent and free relations with some of the great religious houses such as Canterbury, and entrusted their women and children to monasteries for safekeeping in times of disturbance. Aaron of Lincoln was the wealthiest person in England when he died in 1185, his vast estate requiring the creation of a special Exchequer of the Jews, and his loans had apparently even helped to build the cathedrals of Lincoln and Peterborough. Open debates between Jewish and Christian clergy about religious di erences were not uncommon, and conversions are attested in both directions, sometimes for reasons of intermarriage. As well as issuing a charter that protected the basic rights of Jews, Henry I also made sure that monks were sent to all the main towns with a Jewish population to defend the orthodox faith against Judaism. Towards the end of that century in continental Europe, the Tosafist rabbi Elhanan ben Yitzhak recorded concern ‘that in the land of the Isle [England] they are lenient in the matter of drinking strong drinks of the Gentiles and along with them.’ Christians were evidently going down to the local pub with their Jewish neighbours!

But the role of the Jewish community as financiers and therefore power brokers in the key political conflicts was not to end happily, and it led to the expulsion of the Jews from England in 1290 amidst much bloodshed. Three hundred years later, the Jewish people became important again in British Christian thinking with the translation of the Bible into English during the Reformation period.

In 1545, one of the first English Protestant Bible scholars, called John Bale, published a commentary on the Book of Revelation from exile in the Netherlands, haven also for Jews exiled from Spain and Portugal. He interpreted the 144,000 of Rev 14.1–5 literally as ‘the Iewes or Israelytes that shall in this latter age be converted unto Christ,’ also citing Old Testament prophecies. Among these, he cited (and thereby began to fulfil) Jer 31.10—‘Hear the word of the Lord, O nations, and declare in the coastlands afar off, and say, “He who scattered Israel will gather him and keep him as a shepherd keeps his flock.”’ Bale’s views were further popularized by his friend John Foxe, author of the hugely influential Actes and Monuments (ie Book of Martyrs, 1563). During Edward VI’s short reign, the continental Reformed scholars Martin Bucer in Cambridge and Peter Martyr in Oxford both taught that there would be a future national conversion of the Jews.

Recognizing that the Jews were promised a national spiritual restoration, through faith in the Messiah, was the first step toward also acknowledging their promises of a national physical restoration. Sure enough, in the first decade of the 1600s, the Cambridge scholar Thomas Brightman wrote his commentary on Revelation, and holds the distinction of being the first Puritan (thoroughgoing Protestant) writer to argue clearly that the Scriptures predict a physical return of the Jewish people to Jerusalem. He proposed that the ‘kings from the east,’ who cross through the dried-up River Euphrates at the sixth bowl in Rev 16.12, are to be identified as the Jews. ‘But,’ he says, ‘what need there a way to be prepared for them? Shal they returne agayn to Ierusalem? There is nothing more sure: the Prophets plainly confirme it, and beat often upon it.’ He believed that this return, which would include the ten lost tribes, would finally defeat the Muslim Ottoman empire that had conquered Jerusalem in 1517 and now threatened Europe.

It is fascinating to see how these views, at first quite marginal, began to spread, and Patrick notes the way that this perspective gained wider support beyond this Puritan outlook.

Within Great Britain, expectation of Jewish spiritual and physical restoration had spread beyond Puritan evangelicalism into wider British consciousness. The philosopher John Locke assumed this in his 1707 Paraphrase and Notes on the Epistle of St Paul to the Romans (paraphrase of 11.23). In 1721, the hymnist Isaac Watts urged his London congregation that upon seeing ‘one and another of the Jewish nation in this great city,’ zealous for their own religious traditions, then ‘we should let our eyes affect our hearts, and drop a tear of compassion upon their souls,’ and pray for the soon fulfilment of biblical promises for their spiritual and physical restoration (Sermon XIX, on Rom 1.16). In 1733, Sir Isaac Newton published posthumously a work on the prophecies of Daniel and Revelation, which assumes that the Jews must return and rebuild Jerusalem. Reflecting on prophetic details in Dan 9.25, he wondered very practically whether the prophesied ‘“commandment to return” may perhaps come forth not from the Jews themselves, but from some other Kingdom friendly to them.’

This view continue to gather momentum during the eighteenth century, and led to serious political expression in the nineteenth.

The British evangelical machine that began to power the political movement for Jewish restoration, culminating 100 years later in the Balfour Declaration, was in fact designed by Jewish Christians and built out of German parts. Since mission was already well established in German Pietist and Moravian churches, at first they also supplied most of the missionaries for the new British missions. One of these, a German-Jewish convert called Joseph Frey, set up in 1809 a new London Society for the Promotion of Christianity amongst the Jews, commonly called the London Jews’ Society [LJS]. Rapidly drawing the attention of wealthy evangelicals, both Anglican and nonconformist, its first patron was the Duke of Kent (before his daughter Queen Victoria’s birth). Its headquarters were built on the edge of the largely Jewish East End of London in a campus called Palestine Place, modelled after Pietist missionary institutions in Halle, and staffed by gifted Hebrew-speaking scholars such as Alexander McCaul of King’s College London. Initially reaching out to the Jewish community in London, their attention soon turned to those on the continent and also throughout the Middle East, inspired by the remarkable travels of the Jewish-Christian ‘apostle’ Joseph Wolff.

The two most influential evangelical Anglican ministers in the first half of the nineteenth century were both tireless promoters of the LJS all around the country—Charles Simeon in Cambridge, and Edward Bickersteth. The same was true of their close friends (respectively), William Wilberforce and Lord Shaftesbury, each in their turn also known as the moral voice of Britain for their fearless advocacy in Parliament on behalf of the poor and needy across Britain’s vast empire. In 1818, the financial benefactor of the LJS, Lewis Way, was invited by Czar Alexander I to present a well-received paper on Jewish emancipation to the crowned heads of Europe at the international diplomatic conference in Aix-la-Chapelle, following Napoleon’s defeat. 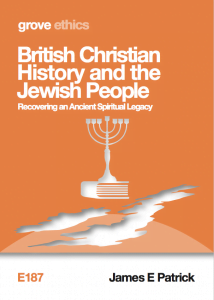 In the final chapter of his booklet, James Patrick traces the complex history of the outworking of the Balfour Declaration, and the current status of Israel in the light of that. Inevitably, this involves interpreting the facts in a particular way—and not all will agree with his interpretation. But the booklet demonstrates that the Balfour Declaration and British relations with the State of Israel are not mere modern phenomena but have deeps roots in British history. It is a fascinating read, and provides essential background for interpreting the events of 100 years ago.

British Christian History and the Jewish People can be ordered from the Grove website for £3.95 (post-free in the UK) or as a PDF ebook.

39 thoughts on “How well has Britain treated the Jews?”