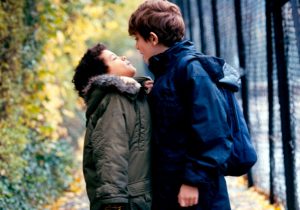 Following my post last week about Rosemary Power’s new Grove booklet Challenging Bullying in Churches, I was sent this review from a fellow clergy person, drawing on that person’s own experience. I know who the author is, but the review is (understandably) offered anonymously.

Nobody likes to be called a bully—and while it’s good to believe that if you stand up to bullies they will back down; we know that it’s not always the case. That is why I am writing this review anonymously, in the hope that it might help others without causing further pain to me or those near me.

Ian opened his blog post on this last week with the question: ‘Does Bullying Happen in Churches?’ It doesn’t take long as you read through his post, and Rosemary Power’s Grove Booklet Challenging Bullying in Churches, that the answer is unequivocally ‘yes’ and that it is far more common than any of us like to admit. I am an ordained minister of some years standing and probably not someone who would most people would see as a target of bullying. But as I was reading through Power’s book I found much which resonated with me.

Power outlines and discusses definitions of bullying from ACAS but I found her own definition much more useful, certainly in a Church context:

Bullying is the sustained use of power destructively against another. It takes an act of will by the perpetrator and requires the acquiescence of onlookers.

This definition is helpful because it names the question as one of power and identifies that there are more people involved than the perpetrator and the target, other people have to allow it to happen, something which is often related to the culture and history of the local church and the community in which it is set.

I am not sure, though, whether her definition of ‘spiritual bullying’ goes far enough.

Spiritual bullying is defined as the situation in which the ‘senior’ faith worker uses his (sic) greater understanding of theology, or experience of being a minister, to point out the failings of the junior faith worker.

The reality is far more complex than that. While this is undeniably one way in which spiritual bullying can occur, it can happen in many other ways too. Clergy do use their positional power to bully lay people or members of staff. Lay people can spiritually bully clergy by using what they consider to be their greater understanding or experience of being a Christian. They may have no positional power but instead have a high level of relational or financial power. Sometimes this might come with the implicit (or sometimes explicit) criticism that all that stuff you did in theological college was (at best) a waste of time, or at other times comes from something they have heard at a conference or read in a book (or on a blog!). Interestingly Power gives what I believe is a far more helpful definition of spiritual bullying on page 19 when she is addressing bullies directly and encouraging them to take practical steps which might help:

Beware of spiritual bullying—believing bullying actions are for the good of another or to ensure his or her improvement.

Power draws on some helpful case studies here and describes exactly what bullying can feel like:

Bullying can dominate someone’s life. The bullied person may reach a point where they fear every email and letter. Emotionally their judgement is likely to be impaired. They may need time off for stress … (page 7)

Fear is the dominant emotion here, and emails make this worse especially now they can be pushed at people through their smart phones. Turning off email notifications or having a work email account which you only access on your computer is one way of dealing with this, but it doesn’t stop text messages!

The one thing which I believe Power misses from this is the effect that this can have on ministerial families, especially when the family home is tied to the job (as almost all are). Clergy move with their families and are ‘all in’—home, school, work, worship and Christian identity are all bound up together. The sense of isolation that this can cause can be almost overwhelming—especially for spouses and children.

Power is spot on here: conflict is about power and it can be so intense in churches because of all the reasons that she lists in the bullet points at the bottom of page 13 (quoting Alistair McKay). From my experience the following points are especially significant:

This is certainly a toxic combination and Power’s reflection on Jesus’ teaching on power relations in Matthew 18 and events throughout his life leading to his passion and death is a helpful reminder than none of this is new or should be unexpected.

Without a doubt the most challenging response that Power gives is the encouragement to “pray for your tormentors daily, by name…recognize that, though they might be acting badly, they may think they are doing God’s work, protecting God’s church.” Not easy, but undoubtedly the right response, though we need to be aware that this type of prayer can become a form of self-abuse, so may need to be done under the care of a counsellor or Spiritual Director.

Power then goes on to list helpful advice for those who perpetrate bullying, for church leaders and organizations and for onlookers. The final chapter suggests places where people can get help and advice and it ends with a final theological reflection on the process of writing the book.

My final reflection is that we all have a part to play in addressing this, because bulling can only happen when onlookers acquiesce, so in one sense they are not really ‘onlookers’ at all, they are as involved as everyone else. I think that is worth bearing in mind for those who will respond by commenting on the blog or on Ian’s Facebook wall. Some may see this as another ‘whingeing clergy rant’ and let us know how incompetent we are anyway, some may sympathise, some may recount tales of how they have been bullied by clergy (which I don’t doubt are true). Some will respond with a version of “if you can’t stand the heat, get out of the kitchen”—but the problem is that many clergy are doing precisely that.

The one ingredient which is so often missing in my experience when bullying is involved is respect. Whenever this word is used in this context then usually the response will be something like ‘respect has to be earnt, not given’ but that is not what Paul says in 1 Thessalonians 5.12-13:

We appeal to you, brothers and sisters, to respect those who labour among you, and have charge of you in the Lord and admonish you; esteem them very highly in love because of their work. Be at peace among yourselves.

Of course this can be and is abused by some and they must be challenged, but Paul seems to be suggesting here that without respect for those in authority in the church there will be no peace, which makes this a gospel imperative, for who wants to be part of something that is at war with itself?

Finally, perhaps the most important thing about this book is that it has been written at all. Bullying does happen and it is a serious problem for the church. In the end perhaps the best way forward is to acknowledge that and bring it into the light:

No one after lighting a lamp hides it under a jar, or puts it under a bed, but puts it on a lampstand, so that those who enter may see the light. For nothing is hidden that will not be disclosed, nor is anything secret that will not become known and come to light. (Luke 8.16–17) 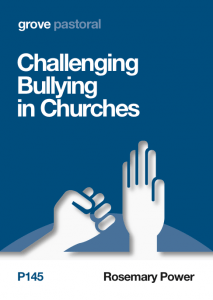 Rosemary’s booklet has clearly hit a nerve and is addressing an very important issue. For anyone local to Nottingham, there will be a book launch on Monday 20th June at 6pm at St Peter’s Church, Nottingham NG1 2NW (next to M and S).  Light refreshments available from 5.30 pm.  All are welcome to come and meet the author, Rosemary Power.  Copies of the booklet can be obtained on the evening or for £3.95 (p and p free) from the Grove website.

6 thoughts on “Challenging Bullying in Churches”