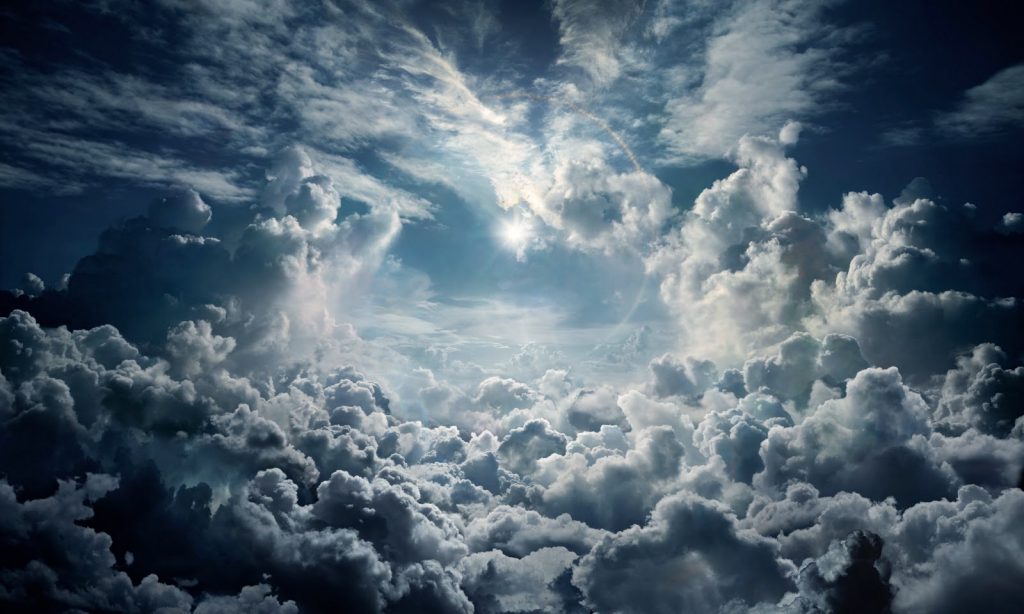 Quite early on in Revelation (1.7) we find the phrase ‘I am coming with the clouds’, and it is striking that the near universal view of commentators on this verse is that it is a reference to the return of Jesus to earth, as promised in Acts 1 and elsewhere. (Note that the New Testament never uses the now-popular phrase ‘second coming’ of Jesus, since this pairs the future with his ‘first coming’ in the incarnation, whereas the NT always pairs his return with his departure, as in ‘he will return in the same way you have seen him go’ in Acts 1.11).

On first reading, this is perhaps not surprising when we look at the verse carefully.

“Look, he is coming with the clouds,”
and “every eye will see him, even those who pierced him”;
and all tribes on earth “will mourn because of him.”
Yes! Amen. (Rev 1.7)

In this translation, parts of the verses have been put in inverted commas by the translator to help us realise the use of Dan 7.13, Zech 12.10 and Zech 12.12, albeit with some adaptations. There is a slight shift in tenses, with the parallel to Dan 7.13 in the present, rather than past, tense; the verb ‘to see’ has been changed to parallel ‘mourn’ (opsetai is echoed now by kopsetai); and the tribes of land [of Israel] now appear to be the tribes on earth (the Greek ge is the same in both cases, but the grammatical structure has changed).

Craig Koester, in his large and excellent Anchor commentary, notes the close parallel with Matt 24.30, though (as Aune points out) the allusions occur in the reverse order. In both cases, the NT texts follow the future tense of the language in Zechariah. But this raises some questions about whether the reference here is to Jesus’ return.

First, within the context of this introductory section, focussing on Jesus’ return seems slightly odd. After the prologue, in Rev 1.4 John writes an epistolary opening following the usual pattern of first-century letter writing which we also see in Paul’s letters. But it is notable that the trinitarian greeting from God emphasises God’s majesty and authority, adapting the name of God as revealed to Moses in Ex 3.14, the six- or seven-fold Spirit of God in Is 11.2, and a three-fold exposition of Jesus’ significance, which include his priority in the new creation (‘firstborn from the dead’) and his de jure authority over earthly kings. The acclamation of 1.7 is then followed by repeated emphasis on God’s majesty and power. And the vision of Jesus that follows in the second half of the chapter similarly portrays his present power and authority in quite startling terms.

Second, the parallel between 1.7 and Matt 24.30 throws up a striking contrast. Matthew’s use of these biblical citations point to Jesus’ triumph and ascension to God as part of both his vindication and the judgement by God of those in Jerusalem who rejected him which (by the time Matthew is writing) are firmly in the past. Yet exactly the same set of allusions in Rev 1.7 is taken by commentators (including Koester, who notes the contrast) to refer to Jesus’ return in the future.

To explore what is going on, we need to spend a little time thinking about ‘clouds’ and what it means to be ‘coming’ with them.

For British readers, we need to make something of a cultural shift. We are used to clouds; we see them all the time; they don’t signify anything much other than that it is going to be a normal rainy day. But if you live below the olive line, then for large parts of the year, clouds are quite unusual. This is, perhaps, part of the cultural background to the regular occurrence of clouds in the Old Testament.

A cloud (or clouds) first feature prominently in the exodus narrative, as God travels with his people in the form of a ‘pillar of cloud by day and a pillar of fire by night’ (Ex 13.21, perhaps first showing that there is no smoke/cloud without fire…). There is no doubt that this symbolises God’s presence in power, protecting his people and confounding the Egyptian army. But as the narrative progresses, it become clear that the cloud of God’s presence on Sinai (Ex 24.15–16) and in the tabernacle (Ex 40.34–35) also signify God’s mystery, otherness and unknowability. In later parts of the narrative, it is often ‘dark clouds’ which signify God’s action in power (e.g. in the song of 1 Sam 22.10) and his impenetrable presence (1 Kings 8.10–11 = 2 Chron 5.14).

Within the wisdom tradition, clouds mostly form part of the created order which manifests God’s glory and power (e.g. Job 37.15) but this is combined in the Psalms with the previous narrative tradition. So God ‘makes the clouds his chariots’ (Ps 104.3) as a symbolic expression of his presence and power in the natural realm.

It is within this symbolic context that we see the development of the language of ‘coming with the clouds’ in the prophetic tradition. When God comes again in judgement to Egypt, he ‘rides on a swift cloud’ (Is 19.1)—and when he comes to his own people to bring the judgement that leads to exile, ‘he advances like the clouds, his chariots come like a whirlwind’ (Jer 4.13). The emphasis here is less on the direction of travel (there is little reference in these verses to God going up or coming down) as it being a sign of his authority and power.

This is the canonical context for reading Daniel 7.13. God’s people are surrounded by the ferocious beasts of successive imperial powers, and they look to the Ancient of Days to render judgement in their favour—which he does as the One like a Son of Man comes to him on the clouds. And this is clearly Jesus’ intention in his use of the phrase in the gospels (Matt 24.30 = Mark 13.26, Matt 26.64 = Mark 14.62). It is worth noting here that the passage so often put with these, 1 Thess 4.13-18, doesn’t draw on this language at all. The ‘coming’ in v 15 is the noun parousia, and the ‘coming’ in v 16 is actually the word ‘descend’. And there is no mention of him coming ‘with clouds’; it is only ‘in the clouds’ that we will meet him. Paul is hear drawing on imagery of an imperial visit, and not on this OT symbolic meaning of ‘clouds’.

Additional note: we also need to be aware how much our interpretation of these ideas is shaped by the implications of the term ‘to come’. In English, this almost universally has a sense of motion towards the reader. But the same is not true of erchomai in Greek. The word occurs frequently, and it is not uncommon for ETs to render it as ‘go’ or ‘went’, as in ‘I may go and worship him’ in Matt 2.8, ‘he went and lived’ in Matt 2.23, 4.13, ‘he had gone indoors’ in Matt 9.28, ‘he went throughout Galilee’ Mark 1.39, and so on. There is a clear sense of arriving at something, but that something is not always the place of the observer or speaker. It is interesting to reflect on how different it would be to translate Dan 7.13 and its echoes as ‘he went/is going with the clouds…’

It is now difficult to see why Rev 1.7 shouldn’t be read within this scheme of Dan 7.13 and its use in the gospels. The text builds the picture of the authority of God as a counterpoint to the claimed authority of imperial power, and between which John’s readers must choose their allegiance. I wonder whether our difficulty in reading this way arises from our desire to connect the text with something in the world of our expectation before we read it canonically in its own symbolic world.

For this reason, it seems to me to make more sense to read Rev 1.7, along with all the other NT uses of the phrase, as pointing to the majesty and power of God and Jesus’ participation of that in the present by virtue of his resurrection and ascension. It also, incidentally, helps us make a bit more sense of another image in Revelation which has taken to be rather sterile in modern culture—the redeemed seated on the clouds singing with harps (Rev 14.3). Rather than suggesting the smooth, creamy taste of Philadelphia cheese spread, it is connected with the heavenly might of God in which we now participate because of Jesus.

9 thoughts on “When is God ‘coming on the clouds’?”