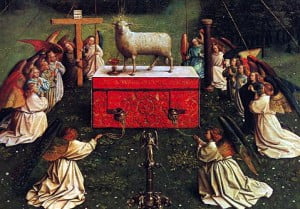 If you make use of Scripture Union’s Encounter with God Bible reading notes, then you will be reading through Revelation 4–9 this week. (If you don’t, why not subscribe?) Here are the comments I wrote on these chapters; for more detailed comment, see my Grove booklet How to Read the Book of Revelation. For my notes on chapters 1 to 3, see my previous post.

At this point in Revelation it feels that we are leaving earthly realities behind and going on an otherworldly journey. For modern readers, we are leaving the familiar and historical and entering a strange world of thrones, elders, beasts and angels. It is a world full of life, colour and noise, overwhelming our senses. Pause for a moment and imagine the sights, sounds and sensations of this worship scene. What can you hear? What do you see? What do you feel?

For John’s readers however, this is the blending of two familiar worlds. First, the world of the Old Testament. The trumpet that announced temple worship calls John (v 1). The same Spirit which lifted Ezekiel to see the one on the throne (Ezek 1:26-28) does the same for John too (v 2). Jewels from Genesis 2 (v 3) accompany the rainbow from Genesis 9, the story of the flood. The thunder and lightning of Mount Sinai draw him to the seven torches of Zechariah 4 (v 5) and the sea of glass from Solomon’s temple (v 6, cf 1 Kings 7:23). This is an encounter with the God who made the world, who longs to see its restoration, and who travelled the long journey of redemption with his people.

But this reality is intertwined with another – the world of the Roman Empire and the worship of its Emperor. Here city elders dress in white, bow down to their august ruler, casting their crowns and hailing him with choruses. But, says John, it is the creator God who deserves this honour, and not any human ruler (vs 9-11). If anyone makes a claim to be the source of peace and prosperity, they are usurping God’s rightful praise, setting themselves up against him. God is the source of all power and majesty, and so all praise rightly belongs to him.

The contrast between chapters 2 and 3, and chapter 4 presents a problem. How can we make sense of the stark contrast between the messy and compromised reality of everyday life, and the splendour and majesty of God? How can we hold together the sin and suffering of the world with the perfection and glory of God? More than that, how might we see God working his purposes out in a confusing world, and see him bring it under his just reign? Who is able to unfold the will of God and make it happen?

John’s perplexity and frustration are brought to an end by a fresh vision of the risen Jesus. In this symbolic world, we must let go of making literal sense of things – after all, how can a multi-coloured rainbow be the colour of an emerald (Rev 4:3)? Instead, we must make sense of John’s imagery in the world of Scripture, and the first century.

The lamb stands ‘at the centre of the throne’ (v 6); he is the one who mediates God’s reign to his creation (the living creatures) and his people (the elders). Although alive, he bears all the marks of sacrifice – one who has offered himself up to save his people. He both bears the Spirit of God in his person, but also sees reality by means of the Spirit of God; his word to us is ‘Spirit and life’ (John 6:63). He is able to unfold God’s purposes, because he died to ransom a people for God, but rose again to be their captain and king. In doing so he fulfilled God’s purposes for his people – to be a holy nation and a priestly kingdom from every nation (Exod 19:6). In Jesus, we find the meeting point of suffering and kingdom (Rev 1:9), of reality and hope, of failure and of faith.

We now leave the heavenly court, being plunged once more into the reality of the world. As always, John reaches for biblical ideas to depict this, here adapting the four horses from Zechariah (Zech 1:8-11). There, they signified a false peace; here, they signify global calamity. This is not some future scenario, but the world as it is (vs 2-8) – a world plagued by false religion (the white horse), war (red), famine (black) and death (pale green). If you don’t believe me, open a newspaper or watch television news!

As God’s purposes unfold with the opening of the fifth seal, we see God’s people suffering persecution but, under the altar (v 9), nevertheless enjoying God’s protection and safe-keeping. The saints who have suffered don’t appear to be followers of the lamb; unlike John (Rev 1:9), the word of God they held to was ‘testimony’ (v 9), but not yet ‘of Jesus’. In fact, they are waiting for their other ‘brothers and sisters’ (v 11) to be added to their number.

With the sixth seal comes the resolution of both the violence of the world and the persecution of the saints – God comes in judgement (vs 12-17). John uses images from Isaiah (the sky rolled like a scroll, Isa 34:4) as well as from Joel (sun darkens, moon turned to blood, Joel 2:31; Is 51:6) relating to the day of the Lord and the end of the age. This language is used by Jesus (Matt 24:29), and at Pentecost, by Peter (Acts 2:20). In Jesus’ death and resurrection and the giving of the Spirit, the new age has broken in, though the final judgement on ‘this’ age is still to come. So this chapter paints a broad-brush history of the world in biblical terms. Having turned from God, the world suffers pain and confusion, rejecting the testimony of God’s people and hurtling towards judgement.

This chapter offers an interlude in the series of seven seals; having mentioned God’s people in chapter 6, John turns aside to look in more detail at how they share in his purposes in the world.

Verses 1 to 3 echo Ezekiel’s account of God’s people being sealed to protect them from the calamities and judgement that the world experiences (Ezek 9). Note that John hears the number of those who are sealed—they are being counted out, tribe by tribe, just as Moses counted the people in the desert (Num 1) and David counted the people in the land (2 Sam 24). In both cases, the purpose was to assess the fighting strength of the people, since every man would be expected to fight. So here we have a disciplined ordering of God’s people, ready for spiritual warfare. The list of tribes here is different from any Old Testament list, and omits the tribe of Dan, who were guilty of idol worship (Judg 18:30). Our readiness for spiritual conflict is connected to our worship of God.

John then looks to see those he has been hearing about (v 9). As previously (‘I turned to see the voice’, Rev 1:12), what John sees and what he hears interpret each other. Those who are counted and ready for battle are in fact uncountable (cf Gen 22:17); the 12 tribes of Israel are now composed of people from ‘every nation, tribe, people and language’ as a result of the ransom of the lamb (Rev 5:9). God’s people are no longer saved ‘out of all nations’ (Ex 19.5) as a separate people or nation (Ex 19:5), but are saved ‘out of the nations’ (Ezek 36:24), a new community coming from every part of the world. Though they suffer (v 14), they praise God as they look forward to their future with him (vs 15-17).

As we return from the interlude of chapter 7, we are again confronted with the stark contrast between the tranquillity and order of the heavenly scenes, and the chaos and turmoil on earth. But there is something connecting the two—the prayers of the saints, mixed with the incense. We have heard the worship of the elders (representing the people of God, Rev 4, 5), and the cry of the saints under the altar (Rev 6). Each time we pray ‘hallowed be your name, your kingdom come, your will be done,’ we make connections between earth and heaven (Matt 6:9,10).

The disasters that unfold as the trumpets are sounded follow the pattern of the seven seals, though with greater intensity. There are strong echoes of the plagues sent on Egypt as a warning to recognise God and let his people go. But there are echoes too of real events in the world of John’s readers; the blazing mountain (v 8) looks very much like the eruption of Vesuvius in AD 79. If the recipients of the seven messages in chapters 2 and 3 are going to compromise their faith to retain a stake in the world around them, they need to know what kind of world that is.

John has already presented God as almighty (Rev 4:8), the one who sees all and is sovereign over all. Yet he is reticent to portray these events as being directed by God. Although the angels stand before the throne, they have only an oblique role in what is happening. The earth ‘is burned’ (v 7), the mountain ‘is thrown’ (v 8), and the sun, moon and stars ‘are struck’ (v 12). The first time God acts directly, from the throne, it is to pronounce that God is now present with humanity, that all pain is over, and that he is making ‘all things new’ (Rev 21:3-5). 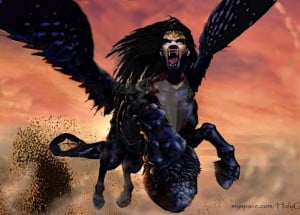 I am a massive fan of Lord of the Rings. I read it avidly as a teenager, and have watched the Peter Jackson films again and again. One of the most vivid features of the films is the depiction of the forces of evil—Saruman, Sauron (although we don’t know what he looks like) and their henchmen, the orcs and uruk-hai. With their thirst for blood and ruthlessness in battle, they become a parody of the human characters. Their shuffling march and motley assembly of weapons are a poor imitation of the beauty and discipline of the elves.

Yet Tolkein was not simply creating a fantasy world, unconnected to reality. It was his deep response to the horrors of the First World War, and his grief at the loss of his friends in the evil of war. This chapter does something similar. The locusts, with their chaotic mixture of human and animal features, are a demonic parody of the living creatures around the throne. Their hideous cacophony contrasts starkly with the harmonious singing of the elders and creatures. The suffering they inflict is a vivid portrayal of life in a world handed over by God to other powers (cf Rom 1:24).

And yet, this chaos is still under the ordering of God in the numbering of the trumpet blasts – even if that ordering is strained to its limits. ‘The effect is something like an orchestral performance in which the strings scrape dissonant chords, while woodwinds shriek … in what seems to be a wild discord – except that all the players move to the steady beat that is set by the conductors hand: one, two, three, four…’ (Craig R Koester, Revelation and the End of All Things, Eerdmans, 2001, p 93). The outcome is not yet the repentance of the people (v 21); that will have to wait until God’s decisive intervention through his faithful, witnessing people (Rev 11.13).