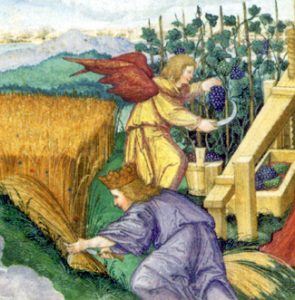 The text of Revelation is notoriously difficult to make sense of, and this is illustrated if you compare the conclusions of commentators, even ones that are taking a broadly similar approach. It is not uncommon to find them reaching quite different conclusions on relatively important matters—but in fact careful attention to the detail of the text can often resolve these questions in quite surprising ways. Even good commentators don’t always (it seems to me) remain rigorously committed to the actual words that John uses, even though all the evidence suggests that his specific choice of words is of enormous significance.

A good example of this is the range of theories around the ‘third woe’. The puzzle here is that, overlaying the second half of the sequence of trumpets in chapters 8 and 9, John introduces the proclamation by an eagle ‘flying in mid-air’ (that is, visible and audible to all) of three woes. The sequence of the fifth trumpet as the first woe and the sixth trumpet as the second woe—which are emphatically signalled in the text at 9.12 and 11.14—leads the reader or hearer to expect that the third woe is associated with the seventh trumpet. But it is more than striking that John omits all mention of the third woe! Despite this, numerous commentators decide that the seventh trumpet must involve the third woe, even adding ‘despite the fact that John does not mention this’! And the content of the seventh trumpet is, in fact, the final coming of the kingdom of God. Although this will mean judgement as well as full salvation, it would be odd to think of this as a ‘woe’ along the lines of the fifth and sixth trumpets.

If, instead, we take the words John uses seriously, then we need to look for the next occurrence of ‘woe’, which duly comes in 12.12 which is proclaimed in relation to the devil going down to the earth, having been expelled from heaven because of the victory of the ‘blood of the lamb’. In other words, the third woe is the ‘end times’ period from Pentecost to Jesus’ return, a time of both ‘kingdom and suffering and patient endurance in Jesus’ when the devil and his agents oppressed the people of God even as they experience the love of God in the death and resurrection of Jesus as the Spirit is poured into their lives. Noting this offers an important temporal marker for the series of sevens; if the third woe is the current period, then the previous woes must be in the immediate past and not the future. This means that the series of trumpets, and with them the seals, do not describe some ‘end times’ future judgement that God will inflict on the earth in gleeful torture, but is a description of the way the world now is and how we should make sense of it. All the details of the series confirm this, since warfare, disease and famine of the four horsemen look very much like first century experience, the blazing mountain of 8.8 looks an awful lot like Vesuvius erupting, and the locust army of the fifth trumpet and fiendish cavalry of the sixth look very much like barbarians from the north and Parthians from east, described to look like the manticore and the chimera respectively.

Paying careful attention to the details of the text is particularly helpful in reading chapter 14. It is often described as ‘one of the most puzzling chapters’ in Revelation—though that could be said of most of the 22! The key questions here are:

You will find amongst good commentaries quite different answers to each of these questions. But they are addressed by looking at the detail of the texts.

On the first question, I haven’t yet found a commentary that notes the description of the 144,000 in verses 4–5 is sevenfold—and that in itself offers us a big clue. First, they did not defile themselves with women, which is often read by feminist commentators as an androcentric and patriarchal concern that depicts the redeemed as male only. This can hardly be the case, unless Revelation alone within the New Testament thinks that salvation is for men only, and it contradicts the inclusive vision of salvation expressed in the four-fold phrase of 7.9 (‘every nation, tribe’ etc). The second description, as virgins, is an unusual clarification, since parthenos is everywhere else in the New Testament a feminine noun which is (in its literal sense) only applied to women (Matt 1.23, 25.1, 21.9, 1 Cor 7.34). It needs to be read here in three contexts:

So God’s people are here being described as devoted to God, committed to the spiritual task and purified for union with Christ. Only a wooden literalism, which pulls this verse out of its textual, canonical and theological context could construe its meaning as androcentric.

The third description, as ones who follow the lamb, uses the common term from the gospels and Jesus’ teaching for discipleship, even though it only occurs here in Revelation. The metaphor implies that disciples emulate the pattern of life of the master that they follow, and accept the master’s fate as their fate. The fourth description, as purchased from humanity, draws on the metaphor of manumission from the slave market that Paul also uses (1 Cor 6.20, 7.23) and which John has used previously in 5.9. The price is mentioned explicitly there as ‘with your blood’, thus connecting this idea with one of the earliest statements about Jesus in the book, that he has ‘freed us from our sins by his blood’ (1.5).

The fifth description, that they are [offered as] firstfruits to God and the lamb draws on the Old Testament image of the offering of the beginning of the harvest, which occurred in the Firstfruits Festival immediately after Passover (Lev 23.10), and 50 days later as part of the Feast of Weeks (Pentecost; Lev 23.15–17). The part of the crop that has ripened first is offered to God in gratitude for the promise it represents of the whole crop eventually being ready to harvest. Paul uses the idea to describe the Spirit as the foretaste of our salvation to come (Rom 8.23), of those who first came to faith in a region as an anticipation of many more (Rom 16.5, 1 Cor 16.15, 2 Thess 2.13) and of Jesus as the first to be raised from the dead as an anticipation of the universal resurrection (1 Cor 15.20, 23). But this is only one half of the meaning of ‘firstfruits’, and probably not the meaning here, since this group are not just the first who will be redeemed; they are all of them. The other meaning of ‘firstfruits’ is that they are a sacrificial offering to God, and this is also the sense of the term in Jer 2.2–3 and James 1.18, and it accords with Paul’s language of the Gentiles who believe becoming an ‘offering to God’ in Rom 15.16. If they do anticipate something, it is not of others being saved, but of the whole creation being renewed when Jesus returns.

The sixth description is that no lie was found in their mouths, which is an almost exact citation of Is 53.9 describing the suffering servant and quoted to describe Jesus in 1 Peter 2.22. John has substituted the word ‘deceit’ (dolos in the Greek Old Testament) with the word ‘lie’ (pseudos) so that they not only follow the example of the lamb (see also Zeph 3.13), but are a counterpoint to the ‘false prophet’ (pseudoprophetes) as the beast from the land is called in 16.13 onwards. The parallel seventh description that they are blameless links this back to the nuptial imagery associated with virginity; the work of the Spirit in sanctifying God’s people will one day be completed (Phil 1.6, 2.15) so that we are presented as a holy, blameless and perfect bride (Eph 5.27).

Thus this sevenfold description (which could nicely resource a sermon or two) draws together imagery from the rest of Revelation and other parts of the New Testament which apply to the whole people of God. It therefore cannot be read as a description of a select group of martyrs.

The other questions about this passages are answered by an observation on John’s structured use of language which, again, I have not found elsewhere. John occasionally mentions ‘another angel’ within his cast of multiple characters, notably at 7.2, 8.3 and 18.1. But within this section, we suddenly meet a veritable torrent of ‘another angel’s! There are six of them, coming at 14.6, 14.8, 14.9, 14.15, 14.17 and 14.18. English translations obscure this structure, since the second and third of these are called ‘a second angel’ and ‘a third angel’ when in Greek John says respectively ‘another angel, a second’ and ‘another angel, a third’. What is striking, structurally, is that the first angel brings good news, whilst angels two and three bring bad news. In the section about the grain and grape harvests, the first of these three angels invites the ‘one like a son of man’ (who must be Jesus, compare 1.13) to take the grain harvest, and its description matches New Testament language about the harvest of those who believe (eg in John 4.35). But the second and (otherwise rather superfluous) third angel exact the grape harvest, which quite unlike the grain harvest image draws on Old Testament language of judgement of the nations opposed to God in Joel 3.13 and Is 63.3.

Thus the section 14.6–20 is comprised of two sections, each with the same structure provided by the phrase ‘another angel’:

It is often said that ‘the devil is in the detail’. But it turns out that, in Revelation, it is both the devil and the divine that reside in the detail—and once we find it, the text looks as though it has a remarkable and consistent coherence to it.

39 thoughts on “On devils, details and reading the Book of Revelation”