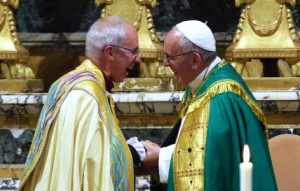 Last the Archbishop of Canterbury, Justin Welby, meets Pope Francis in Rome, their third meeting since taking office. There was a time when such meeting at all, let alone with this frequency, would have been considered unthinkable, and this meeting will celebrate the first meeting of an Archbishop of Canterbury with the Pope since the Reformation—that of Michael Ramsey and Paul VI in 1966. It was a time of historic change in the Church of Rome, following the Second Vatican Council ( or Vatican II, held between 1962 and 1965) which introduced major changes in Catholic practice, including saying Mass in indigenous languages around the world. It was hoped that further changes might follow, including perhaps a review of the understanding of priesthood and whether that could be opened to married men and even, in due course, women, but more conservative popes (including John Paul II and Benedict XVI, who were both part of Vatican II) put paid to such hope.

The thawing of relations between Rome and Canterbury was of historic significance, and led to the founding of the Anglican College in Rome, as a permanent Anglican presence in proximity to the Vatican, as well as the series of meetings known as the Anglican-Roman Catholic International Commission (ARCIC), now in its third phase. Some of the early statements signalled important clarifications of shared understanding of salvation and the church, the meaning of Holy Communion, and the nature of ordained ministry. But there was always some ambiguity about the extent to which both parties involved really represented the positions of their respected churches, and several clarifications were issued following a number of reports. As part of the discussion of papal authority in ARCIC II, the late Ian Cundey, then Bishop of Peterborough, suggested that Anglicans did not, in principle, have difficulty with the idea of a pope. This provoked a robust response from the Bishop of Woolwich, Colin Buchanan, who published a Grove booklet pointing out that this was very far from the case.

Despite the thawing of relations, and the considerable energy invested in these talks over the years, significant differences remain—which some would call ‘fundamental.’ The root of these is the Catholic conviction that the teaching position of the Church has equal authority with the teaching of the canonical Scriptures, something which the historic position of the Church of England (expressed in the XXXIX Articles) vociferously rejects. Differences in ministry centre around the meaning of Holy Communion, which in the Catholic liturgy is clearly referred to as a ‘sacrifice’ (‘May the Lord accept the sacrifice at your hands, for our sake and the sake of all the Church), language that, even with some ambiguity around the edges, the Church of England carefully avoids. And this implies significant differences in understandings of ministry, both in terms of its purpose and focus and who is eligible to be ordained. One of the arguments in the Church of England in relation to the ordination of women was that it would put us further away from the possibility of unity with Rome.

One of the curious dynamics here is that, whilst Rome refuses formally to recognise the ministry of the Church of England, the same is not true in reverse. I was brought up Roman Catholic (by my Irish mother) and so was baptised, received First Holy Communion and was confirmed all within the Catholic church. Since the Church of England recognises Catholic ministry, when I came to be ordained in the Church of England, I simply need to be ‘welcomed’ by my vicar; my baptism and confirmation were accepted—indeed, some Anglo-Catholics seemed rather jealous of the ‘true’ rites that had been administered to me! In 1896, the papal bull Apostolicae Curae stated forcefully why Anglican orders of ministry (and so their sacraments) are null and void. At its anniversary, in 1996, many hoped that Pope Benedict would repeal this—but in fact he reiterated it as formal teaching of the Catholic Church. Strictly speaking, Pope Francis was last week just meeting some chap called Justin.

If relationships are so cordial, whilst being formally rather cool, it is worth asking whether institutional unity is actually that important?

This is not just a question for churches; it also applies to political parties and other institutions. Political historian Dr Robert Crowcroft of Edinburgh University comments in relation to divisions within the Labour party:

…”unity” is not a good in itself, and to call for it is little more than tribalism of the most unthinking sort. Patriots should not “unite” with people who back Britain’s enemies abroad and who pursue a style of politics at home that is little more than malice in the guise of virtue.

Crowcroft believes that, if there are irreconcilable differences, then the honest thing to do is to split, rather than imposing unity and being caught up in a ‘pathological, increasingly pathetic, fixation with “betrayal”. In anticipation of last week’s meeting, Adrian Hilton carries this proposal over into the question of relations between Canterbury and Rome:

Is spiritual division necessarily wrong when it concerns what might be termed the “betrayal” of eternal salvation? If one Christian preaches the sufficiency of Christ crucified once and for all, while another preaches Christ and him crucified over and over again, is such hinished, surely our worship is enlarged and amplified by the conscience-affirming voice of Jesus which speaks of love with truth, and of truth with mercy? Love and mercy may ignite candles of peace, but what manner of peace is it without a thirst for truth?

The church is not a political party, and so the argument does not carry over perfectly. But a recent paper from the Church of England’s Faith and Order Commission (FAOC) makes some observations about disagreement which are pertinent. It quotes from a World Council of Churches report that articulates different forms that ‘unity’ can take, and these include:

communion in the fullness of apostolic faith; in sacramental life; in a truly one and mutually recognized ministry; in structures of conciliar relations and decision-making; and in common witness and service in the world.

Commenting on unity within the Church of England, FAOC notes:

The sequence should not be read hierarchically, as if composed in descending order of significance. Witness and service in a particular place in the world has shaped and indeed defined the Church of England and the way that it has lived communion in Christ. The strength of commitment here has been another crucial factor alongside common forms of worship in forming the distinctive manner in which the Church of England has held diversity in unity and pluriformity in unanimity.

But the same applies to relations with other denominations. It is perfectly possible for Anglicans and Roman Catholics (along with Christians from other denominations) to express ‘common witness and service in the world’ without any formal agreements—and many would argue that this is the most important form of Christian unity, and contributes much more than decades of debate about doctrinal difference in the form of ARCIC.

And perhaps, as Hilton comments, it is rather important to be honest about our differences rather than try and cover them over. The constant refrain is a text that Hilton, too, cites, from John 17.21: ‘…that all of them may be one, Father, just as you are in me and I am in you.’ But this is only the second half of Jesus’ prayer, and his central request to his Father comes in verse 17: ‘Sanctify them by the truth; your word is truth.’ In the long term, complete unity will only come by means of agreement on the truth. But in the meantime, good relations and shared actions testify to the truth of God’s grace more than any form of institutional unification.

In the light of all this, I think the joint statement issue by Archbishop Justin and Pope Francis makes fascinating reading, and includes some impressive observations. Firstly, the opening emphasis is on faithful witness, highlighting the fact that unity is not an end in itself. Secondly, it is very clear that unity is tied to truth, and that there are a range of issues on which the churches do not agree. ‘Behind these differences lies a perennial question about how authority is exercised in the Christian community.’ Thirdly, it recognises that, whilst formal relations are some way apart, personal and practical working together can have a powerful effect and contribute to the effectiveness of mission.

Wider and deeper than our differences are the faith that we share and our common joy in the Gospel. Christ prayed that his disciples may all be one, “so that the world might believe” (John 17: 21). The longing for unity that we express in this Common Declaration is closely tied to the desire we share that men and women come to believe that God sent his Son, Jesus, into the world to save the world from the evil that oppresses and diminishes the entire creation. Jesus gave his life in love, and rising from the dead overcame even death itself. Christians who have come to this faith, have encountered Jesus and the victory of his love in their own lives, and are impelled to share the joy of this Good News with others. Our ability to come together in praise and prayer to God and witness to the world rests on the confidence that we share a common faith and a substantial measure of agreement in faith.

My hope is that the meeting of the two leaders will encourage this kind of mutual respect and shared action by local churches and Christians of each denomination around the country—which will have made it a worthwhile meeting.

(An earlier version of this post was published last week on Premier Christianity’s blog.)