Earlier today, I read a blog post which started by mentioning ‘one of the most powerful Christian leaders in the world.’ I don’t think I read much further. What on earth could such a comment mean?

I was particularly struck by because of a conversation I had had a couple of weeks earlier. I visited some friends, a couple who are both ordained, and who have (rather unexpectedly) ended up in suburban ministry after quite a long period of working in inner city contexts. They arrived in this place through some quite remarkable experiences of guidance from God, including someone who prayed over them and had a very precise vision of the building that they would work in—even though this person knew little of their situation.

Since then, they have been encouraged by significant growth in numbers, giving and discipleship, and are looking to plant a new congregation after only a couple of years. When I asked whether this was hard work, the husband commented along the lines that ‘no, no at all, it was no effort’. God was just doing it.

At one level, part of this comment was a reflection of the difference in leading a church with a good number of confident professionals, by contrast to the demands of inner-city ministry—there was now little shortage of competent volunteers for the range of lay leadership roles in the congregation. But suburban ministry has its own challenges and pressures, and it is certainly not the case that all suburban churches are growing. And the reality is that my friend is incredibly hard-working, resourceful, creative and inspiring. He is no slouch!

So what did he mean by this?

Luke-Acts appears to have a particular interest in the question of power. The TNIV includes ‘power’ 22 times in the gospels; 2 of these occur in Matthew, 4 in Mark, 4 in John, and 12 in Luke. This translates the Greek word dunamis which occurs 15 times in Luke and a further 10 times in Acts. This word also occurs in the other gospels, especially Matthew, but where Matthew mostly uses it to refer to what we would call ‘miracles’ (so TNIV translates it thus), Luke uses it more generally to talk of power in the abstract.

There are several times where Luke adds a reference to ‘power’ where Matthew and Mark make no reference to it.

This interest in power links with Luke’s interest in the Spirit—though, curiously, I don’t recall seeing any literature on this.

There are a couple of things which are quite striking about this language. For one, there is a curious parallel between Mary and her virginal conception and the Pentecost experience of the disciples. Luke uses a very similar phrase in each case, at Luke 1.35 (for Mary), Luke 24.49 (Jesus’ instruction to the disciples to wait) and Acts 1.8 (the second account of Jesus’ words). On both occasions, it is predicted that the Holy Spirit will ‘come on you’ and ‘you will be clothed with power from on high/power of the Most High’. So here, the association is between power and new birth—for Mary, the actual birth of the Messiah, and for the disciples, the birth of the new community of faith in Jesus and his resurrection.

A second thing to note is that often the power comes almost as incidental to the efforts of those involved. I have long been struck by the fact that (in Luke alone) Jesus enters the desert ‘full of the Holy Spirit’ (what more could you want?) but returns from the desert ‘in the power of the Spirit.’ In other words, the effective power of the Spirit, even though he is present, is not complete without the straightening, challenging discipline of the trials, hunger and thirst that Jesus goes through.

So it makes sense that the command to Mary and to the disciples, the ones who will receive ‘power’, is to…do nothing! They are simply to wait until God, in his sovereignty, clothes them with his power. If we want power, it seems, we must seek something else. 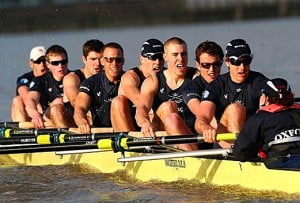 I used to row, and I know first hand that rowers can be fairly fetishistic about strength and power. I once stood in a queue, in Barclays, Cornmarket Street in Oxford, behind the largest man ever to row for Oxford. He was big! It was said that if you were in the seat behind him, you really could not see a thing. The secret of rowing is that the speed of the boat is determined by how hard you pull on your oar, how cleanly and how often.

But sailing is rather different. (I’ve done a bit of this too.) You don’t really come across ‘powerful sailors’ in the way you come across ‘powerful rowers’ because a different dynamic is at work. Of course there is hard work, discipline, stamina and commitment involved. But the speed of the boat is determined by the speed and direction of the wind, and whether you can catch that effectively. That is what the disciplines in sailing are about.

Despite all the pressures we feel to work harder in order to be effective in ministry, it seems to me that the work of ministry is much more like the work of sailing than the work of rowing. I think that is a little of what Luke is telling us. And I have a feeling that that is what my friend was talking about. Yes, he worked hard—but all that was happening was the indirect, ‘wind-blown’ result of what he was doing. He was working to set his sails right, not to haul the boat along.

12 thoughts on “Work, power and fruitfulness”