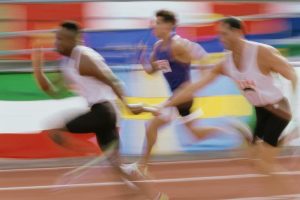 Ian Parkinson, who is the Leadership Specialist at CPAS (following many years in parish ministry) writes: Some months before embarking upon ordained ministry I happened upon a comment from a South American Roman Catholic priest which has, perhaps, more than anything else, shaped my entire approach to ministry and leadership. He suggested that every minister, on taking up a new post, should seek to do themselves out of a job within three years. This, he offered, was exactly what Jesus did in raising up and releasing twelve others to continue his own ministry after his departure.

We might quibble around the three year time frame, but the principle of raising up others (and hopefully others who might outstrip us in every way) and growing them to the point where we might hand on responsibility to them is, for a number of very good reasons, vital for the health of any enterprise with which we are involved.

Essentially, Succession Planning is an intentional process whereby the raising up and preparation of a successor is managed during the incumbency of that person’s predecessor, a process in which that predecessor is significantly involved, often as the initiator or architect of the process. Its goal is to secure continuity and maintain momentum in the ministry of a whole church or a particular sphere or activity. Succession, it should be pointed out, is concerned more about facilitating continuity in the values and culture of an organisation than necessarily with continuity in terms of strategy. It is about maintaining a settled context in which all involved can continue to thrive and to grow in faithfulness and fruitfulness.

This is well within the remit of anyone leading a ministry area within the life of a church, is possible for leaders of larger churches with the capacity to employ assistant staff, and much harder for those leading smaller churches. In the latter case (and this was my experience in my own first incumbency), succession can be shaped by working to create a team leadership structure in which a group of people share responsibility for the oversight of inter alia vision, values and strategy for the mission and ministry of the church. Working in such a collaborative manner enables a consensus to form and be owned by the team around leadership values and priorities which in turn shapes an understanding about what might be needed from a future incumbent. So clearly was this understanding formed by the time I left my first incumbency, and so effective was the leadership team we left in place, that the church sustained (and grew through!) a two year vacancy before my successor arrived and resisted all external pressures to appoint a new incumbent who did not fit with the existing healthy culture.

One of the fascinating conclusions I have reached from my own research into succession planning in a variety of different contexts is that successions rarely succeed (and are often aborted before the process is completed) when someone is brought in from the outside as a designated successor. By contrast, successions have a far greater chance of working well when a successor emerges from within. The notion of the ‘Inside Outsider’ has emerged in recent years in the world of business to denote a person who has grown up within an organisation but who has the perspective and independence of thought of an outsider. Such a person is seen as an ideal successor. In my last incumbency I was privileged to work for four years with an exceptional associate who was not appointed with a view to succeeding me, but who very quickly emerged in the eyes of myself and other leaders as one with the capacity to do so.

Discuss the idea of succession with your potential successor

The best successions tend to have an evolutionary nature to them; succession is an idea which gradually dawns upon the key parties as a logical progression. Many of those who have managed succession well highlight the existence of a strong and open relationship between the two parties and the habit of reflecting together on shared areas of ministry. The time will come when more focussed discussion needs to take place. It is vital at this stage that there be absolute clarity in terms of what is being proposed and about the time frame in which this might take place.

Talk to significant others.

If the succession envisaged is that of incumbency of a church, or of another role in which other key stakeholders have a role to play in any appointment, this is the correct time to consult with them. I arranged to see my bishop and also the patron of the church of which I was incumbent and presented to them a clear rationale as to why the proposed succession seemed to make sense to us, and asking for their opinion (which mercifully, in each case, was favourable!).

Draw up a timetable and stick to it.

One of the most important factors in ensuring that a succession plan works out well is maintaining absolute clarity in terms of what will happen when. To raise the prospect of succession without giving any details of how this process might unfold has the potential to cause great confusion for everyone involved and to provoke impatience and frustration in the successor. Succession is a process as opposed to being an event, and each of the steps in this process need to be highlighted. A gradual, staged handover of responsibilities is helpful for the successor and usually results in a smoother transition.

The other benefit of such a staged transition is that it allows other people to become used gradually to the new leadership. Although we as leaders may well feel profoundly confident of the process we are undertaking and although the process may seem to be unfolding in a planned and deliberate way, we must not underestimate how scary and unpredictable it might appear to others. A properly staged succession can go a long way to building confidence and allaying the fears of those for whom change is unsettling.

Don’t change the ground rules half way through the process.

Having agreed a process and a timetable, it is imperative that these are adhered to. Changes, or alterations to timescales, sometimes come about due to the incumbent, or other key stakeholders, having second thoughts about succession in general, or the proposed successor in particular. More common is the situation where an incumbent or post holder agrees a plan for succession but then either fails to fulfil some of the steps in the agreed timescale or, more commonly, having given away particular responsibilities, subtly acts as if they had not. This may be simply due to force of habit (it is hard to inhabit a subtly changed role from that which you have fulfilled for a lengthy period of time, especially when so much else around you is exactly the same as it always has been), or, more seriously, to a difficulty in entrusting certain things to another.

We have suggested previously that good successions are fostered by the existence of a healthy relationship between incumbent and successor. It is vital that that this relationship is maintained and that together we regularly reflect on the succession process, how it is progressing, how we are each feeling, and what, in particular, might be causing us anxiety. In our weekly conversations, I was able to help my Associate reflect on his changing experiences, offer advice from my own perspective, give some pointers as to how he might avoid certain potential pitfalls as well as offer ongoing encouragement and affirmation. He was also able to help me manage my own transition in roles and responsibilities, and gently point out places where I might be in danger of trying to pick up again things which I had now laid down.

Manage those who have stepped down.

In many instances the person who has been succeeded in a leadership role (e.g. as a small group leader, children’s work leader etc) will still be very much present as a member of the church or may even still be involved with the group or ministry they have previously overseen. They may well need help from you, as overall church leader, in processing the changes to their own situation, in moving on to other things, and in refraining from trying to step back in to elements of their former role. 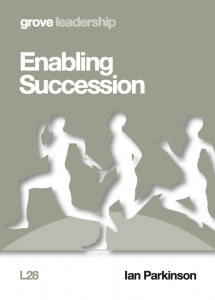 Succession planning is thus not about merely trying to perpetuate or replicate every aspect of my own leadership beyond my particular period in office. Indeed, a good outcome of succession planning would be that people do not miss the previous leader after they have moved on and handed on to another. Change and fresh initiatives will inevitably be part of the future landscape, but such change will have a recognisable logic to it and will not be solely the negative consequence of a change in overall leadership.