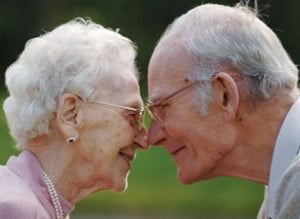 The questions around an ageing population and retirement are perhaps the biggest social and financial challenges to Western democracies. To realise this you just need to know some basic statistics on UK Government spending in the current year.

If you were going to reduce the Government deficit, which of these would be easiest to cut back on? Of course, pensions—and yet David Cameron, following by Labour, has just committed to continue to increase pensions by at least the value of inflation after the next election. Think about that: he has just committed to grow the largest element of Government spending at a time when he is also committed to reducing the total—and add to that the increasing number of pensioners. Does that make any economic sense at all?

Of course not. Neither does the fact that (as I remember seeing on BBC News) in the last ten years the income of those in retirement has gone up by 21.4% whilst average earnings have gone up by 8.4%. This would make sense if pensioners were a group who were relatively poor as a whole—but in fact this is a generation who have benefited from unprecedented growth in both pension investments and housing value. (When I worked in business for Mars Confectionery, joining in 1985 it was possible to plan to retire at age 50. On average life expectancy, that would have meant most of those in management working for less than half their adult life!) The net result is extensive poverty amongst the working.

So this issue is an economic problem and a political challenge—but it is also a key social issue, for at least two reasons. Firstly, the work environment is the place that provides many people with their main context for forming relations, building a sense of esteem, and contributing something to wider society. No surprise, then, that loneliness is a major issue in retirement—to our national shame.

But retirement is set to become socially divisive too. As average life expectancy becomes greater, it also becomes more differentiated; those who are wealthier, better educated and working in non-manual jobs live disproportionately longer than those who are poorer, less well educated, and working in manual occupations. So as the Government increases the retirement age, a significant proportion of the population will never live to see it.

Martin McKee, professor of European Public Health at the London School of Hygiene and Tropical Medicine, and fellow of the Faculty of Public Health, said that if the Government wanted to raise the pension age, they must first tackle health inequalities.

There is, of course, no mention of retirement in the Bible. There are several obvious practical reasons for this:

the lack of a structured ‘welfare state’ alongside the assumption that the extended family is the primary context for continued care of all members of society. The support of those in old age is the first implication of the fifth commandment (Ex 20.12) since it is directed to adult members of the community, not children.

the near-substitence level of much of society for most of the historical period. (A lot of research has been done recently on understanding economic stratification in the Roman Empire, the leading authorities being Steven Friesen, Peter Oakes and Bruce Longenecker.)

the much lower average life expectancy than in modern developed countries. But note that ‘average’ life expectancy is a misleading term, since in any pre-modern or under-developed context high levels of infant mortality massively reduce the ‘average’. Even in the ancient world, people did live into their seventies and beyond; it is believed that the Apostle John lived into his eighties and Polycarp, second-century bishop of Smyrna, was martyred at the age of 86. On the other hand, a Roman soldier who completed his 20 years’ service and was ‘pensioned off’ (often to work in farming) was doing quite well.

But the Bible does contain rich resources for reflecting about our work, or occupation. Right at the beginning, we were created for work in the image of a God who works—Adam was created to manage the earth’s resource (Gen 1.26—28) and to till the ground, not just to enjoy the creation (Gen 2.15). (There is a really good reflection on this, and on our understanding of work, in an early Grove Ethics booklet God at Work by John Goldingay and Robert Innes.) And it is important to note in the creation account that it is only God who rests from his work. When humanity is created on the sixth day (Gen 1.31) so the first thing we have to do is enjoy the Sabbath! God rests from work, but humans can only properly work from rest, from their enjoyment of who God is, why he has created us, and what he has called us to.

In the West we have moved away from an understanding of employment—or, better, occupation—as a vocation which allows us to find fulfilment through exercise of our God-given abilities to serve wider society. Instead, we see work as employment where pay is compensation for the disbenefit and inconvenience for having to give up our time, energy and freedom to our employers. (See Rob Innes’ chapter in the Grove Booklet for an account of this.) In fact, we have moved further still in so-called ‘free market’ economies, so that the workplace is a market where we sell our skills to the highest bidder, and of course those who control the market are the ones who earn the most. In this context, retirement is either the compensation for a lifetime of inconvenience, or the reward for our negotiation in the market of work. Our loss of understanding of work as vocation, as service or as fulfilment are reflected in our education system, which is seen increasingly as a mechanism for accumulating skills for the workplace, rather than as a place for nurturing wisdom, discerning vocation, or developing passion.

Rediscovering work as a life-long vocation will also allow us to recover a vision for a sustainable working life, rooted in community. When I lived on a kibbutz in Israel, I was struck by the fact that all members of the community had a job—regardless of age. As people got older, they worked fewer hours, and moved into roles that were appropriate in their physical demand. Work, as much as anything else, was part of their belonging to the community.

Could something like this happen in a whole society? I think it could—if the Government introduced a tapered pension provision, starting at, say, 60, and continuing to 75, when the full pension would be paid. This would encourage both a move to more sustainable, part-time working in one’s 60s, but a continuing involvement in appropriate work beyond current retirement age. This would have both economic and social benefits.

When do I plan to retire? Actually, never. As long as I have something of value to contribute, which will serve others, and God gives me the ability to offer it, I plan to carry on!

9 thoughts on “(When) should we retire?”