This guest post is a book review by Peter Bates, a friend and member of St Nic’s Church who works in community development.

Robert Lupton’s book Toxic Charity (Harper Collins, 2012) is essential reading for anyone who gives time or money to assist the less well off. It’s a remarkably easy read that requires no background knowledge of community development or volunteering, and yet raises vital issues for both novice and expert alike. His clearly expressed advice was integrated into some forward-thinking aid programmes 30 or more years ago, but it retains its ability to challenge much of what is done in the name of Christ’s love.

The central tenet of the book is that one-way helping demeans both giver and recipient by increasing superiority and dependency, and so should be replaced by community development programmes that promote self-reliance and community leadership. Life-saving, short-term aid is OK for a few days following a tsunami, but should be quickly converted into development support that empowers individuals and restores community control. Lupton lambasts governments and charitable organisations that give handouts rather than build relationships, and he shows how their charitable acts harm the people they are designed to help. Churches run toxic foreign mission trips and toxic food banks, he says, and do themselves no good in the process.

Reading the book during a Christian conference launched five areas of contemplation in my mind. Some emerged from what Lupton wrote; others from his silences.

First, Lupton suggests that being on the receiving end of a one-way dependency relationship makes us resentful, while on the other hand, mutuality engenders respect. I agree wholeheartedly about this in relation to community building, but it made me wonder about my relationship with God. Is it possible that underneath the layers of gratitude to the God who has given me so much there lies a hidden splinter of resentment? Or perhaps the problem lies in the other direction – that it is OK to be dependent on a perfect God, but not on an imperfect human. Or am I stuck in infantile dependence?

Second, Toxic Charity encourages churches to move from handouts to handups. It is great to help people to develop a support group and then apply for a microloan. These deserving poor will be energised to act on their ambitions and increase their economic and social capital. Their ranks will be swelled by those who hear the good news of Jesus and find that their new faith brings vision and drive. But what about those who live such chaotic lives that they are perpetually in crisis, who seem unable to dream or who flit from one goal to another, running scared from those who genuinely care? In the old paternalism, they were fed at the food bank, but now that our focus is on community-run cooperatives, will they starve? Lupton does remind us of the words of Jesus – to provide a cup of water to the thirsty without asking too many questions.

Third, the book helpfully focuses us upon a businesslike return-on-investment approach which demands clear goalsetting and SMART outcomes in exchange for its finance and effort. This presses us to define our goals for the community. Lupton paints a picture of a vibrant community with decent homes, schools and job opportunities, run by local people for local people. He adds a vague allusion to ‘spiritual vitality’. Evangelical Christians in the UK need to consider what this means in a multicultural, diverse society. Do we rejoice when the redundant pub on the corner is refurbished and opens as a gurdwara, or are we secretly troubled? What about people with additional needs, such as dementia? What does shalom mean for the whole community?

This quest for a God-given vision of community provokes yet further explorations. Lupton makes no more than a passing reference to communities of interest, focusing instead on geographical neighbourhoods. It is one legitimate perspective on community renewal, reminding me of John 1.14, which Petersen translates as ‘Jesus moved into the neighbourhood’. But surely we need to think about community renewal and mission in ways that also have traction within interest groups, both offline and online? Perhaps the Biblical view of community is bigger than the city, broader than ethnicity, and asks where people work, shop and socialise and well as where they sleep. 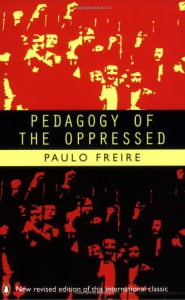 Fourth, the simplicity of Lupton’s thesis somewhat downplays the history of community development and empowerment. As well as the experts he does quote, he might have noted the disability movement’s slogan ‘nothing about me without me’ (Latin: ‘Nihil de nobis, sine nobis’) which originated in 15th century Poland, the settlement movement that transformed parts of 19th century London, Freire’s work in mobilising rural villages in 1960s South America, Oldenberg’s celebration of third places in the 1980s, Putnam’s research into social capital – the list could go on and on. Whilst I delighted in Lupton’s uncluttered message, I wondered if popular evangelicalism is doing rather too much of this stripped-down presentation, failing to credit its sources in a practice we might call ‘concept plagiarism’.

Fifth, I was delighted to see Lupton reinforce the importance of an asset-based approach that builds on the strengths and resources of ‘the poor’ rather than focusing on deficit, failure and need. Homeless people need to run their own food buying business, rather than being relegated to mere guests at a free meal served up by professionals. Taking this perspective seriously would transform not just the church’s impact on the world, but her internal structures too. In church we would redesign our committees and conversations. We would listen with fascination to seldom heard voices, be led by children and follow advice from those the world treats as too disabled, too foolish or too untidy to add value. Even our intercessions would shift from bewailing the corruption of a lost generation to giving thanks for the beauty of our communities.

In conclusion, Robert Lupton has written a stirring book that suggests that the unexamined ‘act of kindness’ may do harm. He offers a set of guidelines that can be used to test mission and mercy projects. He presses us to dismantle the binary worldview that creates us and them, and find ways in which we can help each other.

1 thought on “When does help harm?”