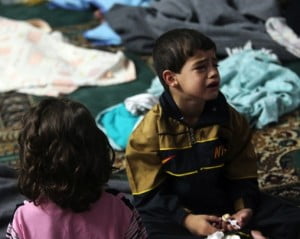 A good starting place is to understand the complexity of the situation. One person commenting on Nick Baines’s blog cries in despair ‘How on earth can there be such historical hate and control…?’ The answer has its roots in the complex tribal relations and the mess made of them by the development of the modern states, with their often arbitrary borders imposed by retreating imperial powers. A letter in the Financial Times last week showed how difficult it is to make sense of it all:

Welcome to the Middle East and have a nice day.

An even clearer demonstration of the complexity is the chart produced by the Egyptian who blogs as The Big Pharaoh: 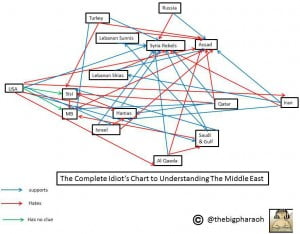 He comments: ‘I keep on updating this chart because every time I look at it I discover that I’ve missed an arrow. That’s how complicated it is.’ And that’s from someone who understands the culture and the history.

When I lived in Israel (and visited Egypt) in my gap year, it felt as though it took six months just to begin to understand the key issues. As someone once said about the Troubles in Northern Ireland: ‘If you are not confused, then you do not know what is going on.’

Complexity of situation leads to confusion of decision-making. The Slate explores all the reasons for and against armed intervention, as represented by different views expressed in the US Congress. It lists nine arguments against intervention, 11 for, and even two different reasons for sitting on the fence. Few of these reasons seem to have much overlap with any of the others.

The lack of understanding would be comical if it was not so tragic. The war in Iraq was in large part fought on the basis of George W Bush’s argument that Saddam Hussein was in league with Al-Qaeda. In fact, as a secularist, Saddam was precisely the opposite—a bulwark against the kind of Islamism that seems central to the agenda of Al-Qaeda. But even that most basic of facts was beyond the grasp of Western strategists. The Iraq War thus did not resolve the ‘war against terror’; it fomented it.

A recent BBC documentary on the war and its aftermath demonstrated the directness of the connection between ignorance and violence. Jay Garner, first head of the Coalition Provisional Authority, understood the region and wanted to work constructively with local Iraqis, but this was not good enough for the authorities back home. He was abruptly removed, and replaced with Paul Bremer, who had no such understanding. Bremer’s first act was to disband the entire Iraqi army, releasing 400,000 armed, trained and disgruntled men, owed significant sums of back pay, into the country. Predictably, the Insurgency began soon after. In the documentary, Bremer’s lack of understanding and his obdurate unwillingness to listen are palpable.

All this means that the consequences of any action are well-nigh impossible to predict. Were you aware that, in Afghanistan, UK Government funds were paying for Taliban weapons that were killing British soldiers? Contractors, paid by the Ministry of Defence, who ensured the continuity of supplies to the Western forces had to pay protection money to local groups in order to guarantee the safety of convoys—groups that were controlled by and passed funds to the Taliban.

One of the key unforeseen consequences of all the recent conflicts has been the decimation of ancient Christian Arab communities. The same is true in Syria, as Robin Harris points out. ‘Whether in Iraq, or Syria, or Egypt, or in any future hotspot (Lebanon will probably be next) the Christian community somehow is always just too insignificant, and usually on the wrong side of the argument.’ And a key reason for this arises from Western strategic thinking, or lack of it:

One reason is that Arab Christians do not fit into the governing global misconceptions. In the Middle East, reflective people are unimpressed by promises of democracy.  In particular, Christians there have understood, after centuries of experience, that western promises are worthless, because westerners never stay engaged. Christians reckon that their only guarantee of survival is stability; that their only hope for equality is secularism; and that their two great enemies are Islamic zeal and anarchy. And they are right, even if that makes no sense to Britain’s neocon Prime Minister and his advisers.

As Charles Reed’s helpful series of blogs on Just War theory applied to Syria shows, the imperative to consider consequences of military action weighs against intervention, as do consideration of the other five issues (just cause, right intent, just authority, last resort, proportionality). I’m not sure that those who celebrated Egypt’s ‘Arab Spring’ quite realised that the toppling of the military regime would lead to the appointment of an Islamist group who would not be interested in human rights or democracy in the long term. And it is clear enough that the rebels against Assad’s regime would be no friends of democracy.

So what should we do? I would like to argue for three key actions.

First, do the sums and consider the alternatives. The US gives Egypt $1.3 billion every year in military aid. Imagine what would be the impact of using these funds to invest in education and healthcare in the region. The Iraq War is now reckoned to have cost the US $2 trillion. That is enough to have paid every man, woman and child in Iraq more than $6,000 each, every single year since the war began. Think what that money could have done.

Secondly, curb the arms industry. This is unlikely to happen in the US, where the ‘military-industrial complex’ is so closely tied to government. But this could be possible in Britain (which some calculate as the world’s second-largest arms exporter, after the States but ahead of Russian and France) even though David Cameron has energetically supported the arms industry. The effect of these exports is to make the world a more violent place, often serving oppressive regimes. The Government has issued more than 3,000 export licences for military and intelligence equipment worth a total of £12.3bn to countries which are on its own official list for human rights abuses—including three currently to Syria. But change is possible; there are plenty of historical examples of arms industries re-training into other areas of manufacture.

Thirdly, revise our foreign policy. We frequently here the explanation that a policy is justified because ‘it is in the British national interest.’ What this usually means is that a relationship needs to be nurtured for our short-term financial interest, or as part of a power-play to gain influence in a region. But both of these are almost always at the expense of any moral justification. This kind of approach leads us to support the flaunting of human rights in Saudi Arabia at the same time as standing by whilst our allies plot to overthrow the democratic, socialist government of Venezuela which has pulled millions out of poverty and into education. If we were to consistently support regimes in proportion to their openness to human rights, democracy and universal education and suffrage, then in a few decades we might even have some credibility in foreign affairs. There would be short-term costs—but enormous long-term gains.

My closing comments belong to Pope Francis in his letter to the G20 leaders gathered in St Petersburg:

To the leaders present, to each and every one, I make a heartfelt appeal for them to help find ways to overcome the conflicting positions and to lay aside the futile pursuit of a military solution. Rather, let there be a renewed commitment to seek, with courage and determination, a peaceful solution through dialogue and negotiation of the parties, unanimously supported by the international community.

Without peace, there can be no form of economic development. Violence never begets peace, the necessary condition for development.

Fighting hatred, ignorance and tribalism through partnership in education, poverty relief and the recognition of human rights—now that would be a Just War.

2 thoughts on “What we should do about Syria”